The West Coast Eagles locked in their 2017 finals berth in spectacular fashion on Sunday afternoon, defeating the Adelaide Crows by 29 points, shattering the dreams of the Melbourne Demons along the way.

The Eagles had an inconsistent season, suffering losses to the lowly Suns, Pies, Saints and Hawks. Their best was very good, however, producing wins over Geelong, Port Adelaide and the top-of-the-table Crows.

Their biggest area of concern throughout the year was the lack of pace they possessed through the middle of the ground. Retiring Brownlow medallists Sam Mitchell (controversial, I know) and Matt Priddis were much maligned for looking slow. Luke Shuey, while having a good year, was not at the top of his game, although Andrew Gaff managed a career-best season.

A large part of this is due to the absence of All Australian ruckman Nic Naitanui, who is recovering from a torn ACL suffered in Round 22. There is no word on a possible return for the finals, although it appears unlikely.

Also on the sidelines is their second ruckman, Scott Lycett. This has forced West Coast to rely on Nathan Vardy, Drew Petrie and Jonathon Giles to handle the ruck responsibilities – far from ideal.

West Coast’s biggest strength over the past few seasons has been their intercept marking. Jeremy McGovern, Elliot Yeo and Ron Barrass are all elite at creating scores from turnovers. Their set up defensively makes them hard to score against, as they typically play one man loose in their defensive 50.

This is how they controlled the game against the Crows. By forcing long, high kicks to outnumbered contests, the Eagles were able to find targets down the ground and create holes in the Crows defence.

Also pleasing for Simpson was his team’s ability to find ways to score when Josh Kennedy was not at his best. The two-time Coleman medallist managed just one goal on Sunday, while smaller players Jamie Cripps, Mark Hutchings and Mark LeCras kicked seven goals between them.

Kennedy was still the Eagles’ number one target, and on one of his better days would probably have finished with three goals. But slightly off his game and played manfully by Kyle Hartigan, Kennedy struggled to make a scoreboard impact.

Odds are that Kennedy will be back at his best as the Eagles travel to Adelaide to take on the Power in a fortnight’s time, a team which he has had success against over the past few seasons.

The two teams took a game apiece from each other this season, with the away team prevailing on both occasions. Kennedy was out injured in the second meeting, however, as the Power ran over the top of the home side in the final quarter.

Also pleasing for West Coast was the performance of Lewis Jetta. Jetta has often been criticised since coming over from Sydney for a lack of intensity and a poor attitude, but the 28-year-old was at his dashing best on Sunday, playing an important role in the Eagles’ pulsating fourth quarter finish.

West Coast are good enough to compete with the best teams in the AFL. If they can break even in the midfield, and their outside users such as Jetta, Gaff and Liam Duggan deliver the ball on a platter to their potent forward line, the Eagles can aspire for more than just an honourable finals appearance.

West Coast coach Adam Simpson has implored fans to stick by the club during its year of pain. The Eagles slumped to their fifth… 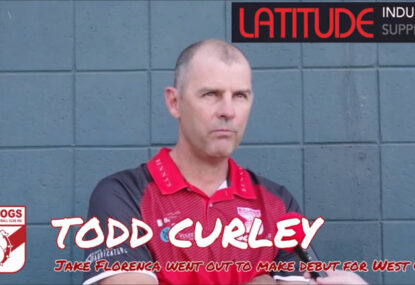