For a bit of fun before the exciting 2017 AFL finals series, I offer my top five coaches for the 2017 home-and-away season, counting from number five to number one

Number 5: Leon Cameron, Greater Western Sydney
Cameron started the season with a belting by Adelaide, who proved later to be the real deal, but by the time they handed their Sydney cousins a lesson in Round 5 the Ferrari was back under control.

A bad loss to St Kilda showed the Ferrari needed a tune, and they did enough to secure several close wins in the season along with two draws and a one-point loss to the Blues. In fact, looking at results decided by 12 points or less, GWS have a 5-1 in their favour, so they could so easily have missed the top four.

Yes, many will think Cameron has not achieved with his list until he wins the flag, but in a season with a strong injury count, challenges with Toby Greene’s aggression boundaries and the decline of Steve Johnson, he has them in top four with a strong tilt at the 2017 flag.

Number 4: John Longmire, Sydney
This is the trickiest grading. You can justifiably argue that even with their early injuries some of the blame must sit with the coach for the Swans to go 0-6. Looking at those early performances in hindsight, they weren’t bad losses, and Longmire was already trying to plug the seemingly sinking ship.

While Hawthorn was getting belted early on, the Swans weren’t. The average Swans loss in Rounds 1 to 6 was 24 points against Hawthorn’s average loss of 59 points. To recover and have only two losses since Round 6 – both to the Hawks – is phenomenal.

Some would argue Longmire should be number one. I choose to downgrade him a little for the poor start to the year yet marvel that they finished 14-8.

Number 3: Damien Hardwick, Richmond
Many punters tipped the Tigers to miss the eight altogether in 2017. Some even had them in the bottom four, with many Tigers fans furious about and puzzled by Hardwick surviving. Yet the Tigers have surprised most with a strong season out of the blocks.

Arguments that the Tigers had a favourable draw and healthy list are moot – the proof is in the pudding and Hardwick has his no-name Tigers sitting pretty in the top four with a genuine shot at the title.

Let’s not forget the new-look Tigers lost Rounds 7 to 9 by a total of just ten points – they could’ve finished top of the ladder. The Tigers-finishing-ninth comedy line is now buried, and the next step is to bury the finals hoodoo.

Apart from the genuine stars in Dustin Martin, Trent Cotchin and Alex Rance, many of us hardly know who plays in the yellow and black, yet they play for each other and play as a team, which is surely a huge tick for the coach.

An interesting point is that the Tigers sit third with 15-7 win-loss record and a percentage of 118.3 after the home-and-away season. The Doggies at the end of 2016 sat 15-7 with a percentage of 115.4 yet were seventh – perhaps an ominous sign that these no-name Tigers might go the whole way in 2017. 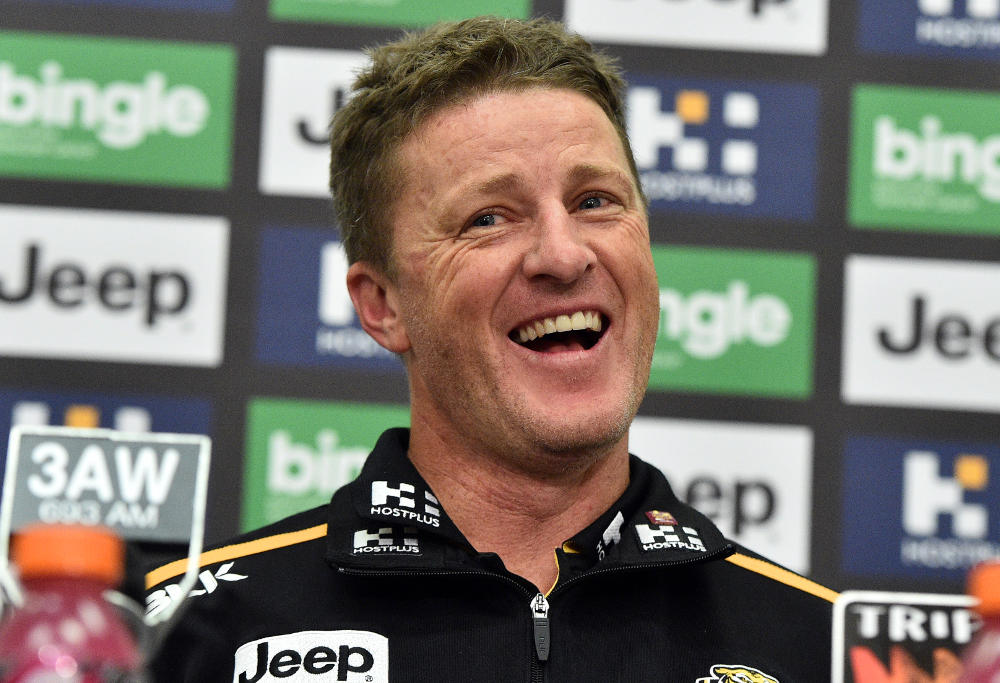 Number 2: Don Pyke, Adelaide
What can you say about the Crows that hasn’t already been said? The tragic loss of Phil Walsh may have taken other clubs many, many years to recover from, yet in the short time Phil was at the club he appears to have had a profound influence in changing the culture and expectations of success.

Earlier in the year the Crows players marked the two-year anniversary of the loss of Phil and appear to have steeled themselves for success. For Don Pyke to come into the club and make it focus on footy as a way out of the grief after this tragedy was surely one of the toughest tasks in coaching.

The heartbreak of failing at the semi-final stage in 2015 and 2016 also burns. After bad successive losses to the Kangaroos and Demons in Rounds 7 and 8, Pyke reset his team, and they have been pretty consistent since, arguably putting the cue in the rack only last week against the Eagles. Top spot, highest percentage and way ahead in points for the Crows have them sitting as deserved favourites for the title.

Number 1: John Worsfold, Essendon
This could have been the coaching ad John Worsfold responded to back in 2015:

“Senior coaching vacancy to be filled at AFL club. Looking for a compassionate coach with some psychological experience to cope with a large group of players tormented with years of doubt, derision, ongoing legal issues and scorn from other clubs and supporters. Thick skin will be looked upon favourably. You should also be prepared for losing most of your starting list in your first season and, if so, you will also need to blend those same tormented players with a mish-mash of top-up recycled rejects from other clubs in your second year. We don’t really expect anything after the past few years apart from helping our great club not be torn apart. In fact, bottom four would be fine until year three. After the past few years we aren’t even thinking finals until 2020. Please apply at Windy Hill if the club is still here.”

Not only did John handle himself with utmost grace and aplomb in year one while having most of his starting 18 ripped away, he recovered in year two, blending the emerging new group together, handling the unimaginably difficult decision-making of compassionate loyalty versus team performance and finding some outstanding young talent. He then went on to make the finals.

You have got to be kidding. No one does that. Not even Alastair Clarkson.

Oh yes, he has the Bombers seventh, and his exciting group are the third-highest scoring team in the competition. They have already overachieved and yet are still not quite finished with 2017.

What happens if they beat Sydney? For me, John Worsfold wins this by a street, and his club’s remarkable performance, grace and humility has compelled this Crows supporter to also buy an Essendon membership in 2018.