Thorpe in as new team director for Melbourne Rebels

Former All Blacks manager Tony Thorpe is joining the Melbourne Rebels as the club’s new Team Director for the 2018 season.

Thorpe is vastly experienced and is a nice addition for the rebuilding Rebels, who are looking to take a step forward under new coach David Wessels.

Thorpe has an impressive resume. As a player, he represented Canterbury and made appearances for the New Zealand Sevens team. He has since spent time as Team Manager with the All Blacks and Crusaders (winning three Super Rugby titles), was Team Director for Brumbies Rugby and was General Manager of the Fiji Rugby Union.

The Rebels’ new Director is ready for the next chapter in his career.

“I’m fortunate for the opportunity to work with David and the management team at the start of a new era for the Melbourne Rebels and excited by the club’s untapped potential in the growing squad and organisation,” Thorpe said.

“There are some challenges to overcome in a very short period of time but David’s pulling together a group capable of navigating the club on this exciting journey to deliver success for the Rebels,” he added.

Melbourne’s leadership is excited to welcome Thorpe into the organization.

“Tony’s extensive management experience will make him an extremely valuable asset to our refreshed rugby program at the Rebels. Our club is going to go through a major transformation and there is so much work to get done in such a small amount of time. Tony knows what success and strong team cultures look like,” Rebels chief executive officer Baden Stephenson said.

The Melbourne Rebels open their 2018 Super Rugby campaign at against the Queensland Reds at AAMI Park on Friday 23 February.

Former British and Irish Lions lock Geoff Parling will be the Wallabies’ forwards coach in 2020.

One of the better Australian derbies in years, and easily the best Super Rugby AU match to date saw the Queensland Reds win the qualifying final over the Melbourne Rebels, and have now won through to Saturday night’s final against the Brumbies in Canberra. 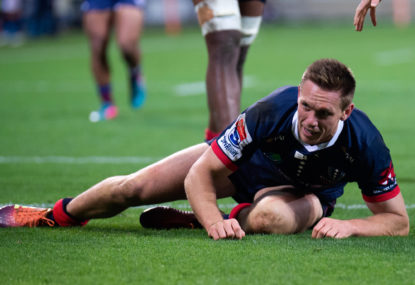