They ruled that any athlete wishing to compete in IAAF restricted female events from November 2018, in events ranging from the 400m to the mile, must have a ‘level of circulating testosterone (in serum) below five (5) nmol/L for a continuous period of at least six months (for example, by use of hormonal contraceptives).

While the IAAF’s testosterone limit is stated as being higher than most females (range 0.12 to 1.79 nmol/L), compared to most males after puberty (7.7-29.4 nmol/L), the new rule applies to any Athlete with Differences of Sexual Development recognised ‘at law either as female or as intersex (or equivalent)’.

However, while the IAAF decision is based on its own commissioned study of 2127 mass spectrometry-measured serum androgen concentrations obtained from elite athletes participating in the 2011 and 2013 IAAF World Championships, the focus on certain events is ridiculous given that testosterone helps all events that rely greatly on muscular power.

As summarised by a 2012 study referring to the existing literature concerning testosterone and gender, the highest basal testosterone levels were found ‘in explosive athletes, such as sprinters, and the lowest in endurance athletes such as cross-country skiers’.

Further, it was observed that ‘natural testosterone levels may prove to be more important in the ability to produce acute explosive power; a variable that is a determinant of performance in sprint, jumping and throwing events’.

Observers of performance enhancing drug use can also confirm the benefits of testosterone (and related anabolic steroid derivatives) for female athletes in virtually all power and speed athletic events.

A 1997 article, observing the German Democratic Republic (GDR) female athletes who took testosterone and anabolic steroids from the early 1970s, found that improvements for females were significant in many track and field events.

While the throwing events speak for themselves given the importance that strength plays in overcoming heavy external resistance, especially with regard to the shot put given that projected improvements represent around 30 per cent of the 1987 world record (22.63m) still standing today, the GDR data indicates great benefit to all observed events.

In the end, many people in track and field can verify how testosterone helps virtually all events, thus prompting the question to why the IAAF did not seek anonymous advice from coaches in the know.

The problem with the IAAF using data analysis is that qualitative factors have not been considered.

For example, while some commentary has accused the IAAF of targeting third world athletes, notably the multiple 800m global champion Caster Semenya who has a high level of endogenous testosterone, it may well be that females in third world countries target certain events from 400m to 1500m rather than pursuing shorter sprints where pure speed and talent is much harder to overcome.

With the ongoing dominance by the USA and Caribbean athletes in the 100m and 200m, other female athletes may focus on longer distances races where aerobic fitness factors has greater influence.

There may be a whole range of reasons why female athletes target certain events, an aspect which cannot be picked up by any reliance on an examination of results data.

And notwithstanding the argument of epidemiologist Gideon Meyerowitz-Katz who criticised the study used by the IAAF as being a flawed methodology because the report authors ran the tests 43 times to come to their conclusion, another 2018 article rightfully points out that making policy on such statistical findings will inevitably mean ongoing changes of targeted events every time a study is replicated with new data.

While the IAAF is eager to prevent females succeeding with said masculine advantages, as was the case when Stalislawa Walasiewicz (later known as Stella Walsh) won the 100m in 1932 and was found to have ambiguous genitalia at autopsy in 1980, it is absolutely silly to target certain events over others given that higher testosterone levels help all power events.

Despite the ongoing need for public debate about who can or cannot compete as a female, as suggested by a 2014 study of elite athletes which found that 16.5 per cent of men had low testosterone levels while 13.7 per cent of women had high levels with complete overlap between the sexes, the targeting of a few running events does not make sense given that high levels of testosterone helps all events where muscular power is involved.

World-record sprinter and eight-time Olympic gold medallist Usain Bolt has tested positive for the coronavirus and is self-isolating at his home in Jamaica. 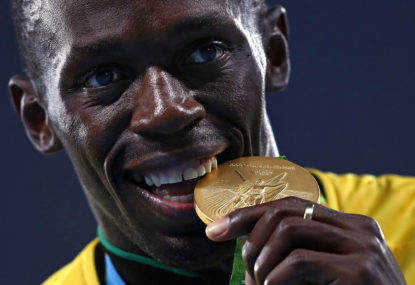