Why I need to take a break from football

The furore around Avondale FC covering the Italian flag on the back of their jerseys is the sort of nonsense that only the FFA could come up with.

Time and time again, Football Federation Australia’s online apologists implore snarky critics like me to give them a chance, pointing out – not unreasonably – that running a sport like football in this country is much easier said than done.

But then you tune into a televised FFA Cup fixture where one team is forced to tape over a miniscule Italian flag on the back of their jerseys, while the other team runs around in an away kit bearing the colours of that same Italian flag, and you can only shake your head and laugh.

Let’s be honest: there’s no place for the National Club Identity Policy in 2018, and anyone who thinks it helps foster unity in Australian football clearly doesn’t understand the market.

It was a bad idea when it was introduced four years ago and it’s an indefensible one now.

And if David Gallop thinks anyone actually wants the NCIP in place, then the problem is Gallop, not football.

The stupidity of the policy was amply illustrated every time the Fox Sports broadcast crossed to Dorrien Gardens in Perth to check on a progress score from Gwelup Croatia’s home game.

So, just to recap: club named after country – fine; away kit representing colours of national flag – fine; small flag on the back of a jersey – not fine.

Yet some would have you believe the problem lies not with the FFA instituting a convoluted, ill-conceived, borderline racist identity policy, but rather with those who highlight the fact that it’s this kind of thing that makes the game’s governing body look incompetent.

That’s okay if shooting the messenger helps fill your quota of online rage-comments for the day, but it does little to pressure the powers that be into improving their own performance. 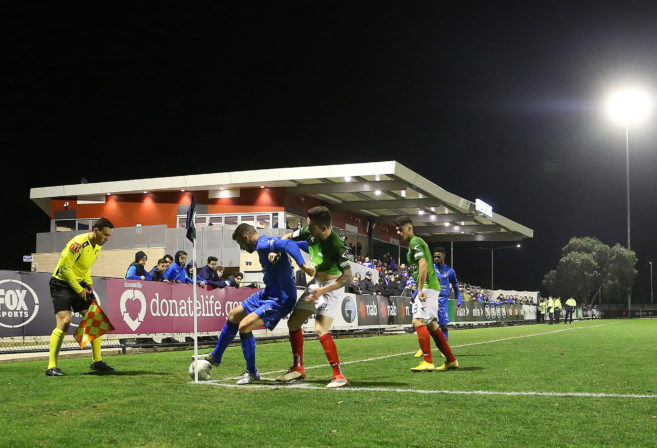 Avondale vs Marconi was dragged into controversy around the FFA’s NCIP regulations. (Photo by Scott Barbour/Getty Images)

And since this latest round of identity politics has fuelled such a visceral backlash, and given that FFA are clearly keen to be seen as listening to their stakeholders while the Congress Review Working Group goes about its business, now seems like the perfect time to put an end to this NCIP nonsense.

Since I’ll be in town, I was half-considering making the trek out to Barlow Park to watch locals Cairns FC take on Western Australian visitors Armadale SC in the FFA Cup on Wednesday night – but frankly, I’ve got more pressing matters to attend to.

Cairns beat Townsville outfit North Queensland United in the sixth round – both clubs have recently been renamed – and the Mackay and Whitsundays-based Magpies Crusaders United in the seventh round.

Far North Queensland has long been a footballing hotbed, but aside from a few visits from Brisbane Roar, it’s been largely ignored in the A-League era since the demise of the North Queensland Fury.

I’ll be in town for a different reason though. I’m getting married to my beautiful Cairns-born partner at Palm Cove later this week.

And I’ll be taking a couple of weeks off for some much-needed rest and relaxation thereafter.

“So what?” I can see my usual detractors tapping away in earnest.

Well, for starters, I have filed a column for The Roar every week continuously between December 2008 and July 2014, and again from November 2015 until today.

The 15 months I took off after the 2014 World Cup was the only time I have ever taken a break.

I’ve produced columns on public holidays, written constantly on the road, I even once wrote out a column by hand during a short stay in hospital.

I’ve now written 736 articles – equating to more than half a million words on football – for this website alone.

So I hope you’ll forgive me for taking care of my personal life for a few weeks.

I’ll probably still watch the remaining FFA Cup Round of 32 fixtures. It’ll just be from a deck chair by the pool on my honeymoon.