Mo'unga and Barrett are knocking on the door at number 10, but who will it open for?

The best four teams in Super Rugby are all from New Zealand. By right of the best win-loss records in the competition, it should have been the Crusaders, Hurricanes, Chiefs and Highlanders who were contesting the semi-finals.

While the Waratahs and Lions might argue the toss concerning the identity of the fourth best side, there is not much doubt that the Crusaders, ‘Canes and Chiefs are the tournament’s top three by a distance. Only the heavily-weighted Conference structure has kept the hopes of Australian and South African franchises alive until the semi-final stage.

The strength in depth of New Zealand rugby is reflected by playing position. Four of the top six number 10s in the tournament have been from the shaky isles, and Bernard Foley and Handre Pollard would be the only outside-halves threatening to break into one of the top four Kiwi franchises from outside of the country.

Yet New Zealand is still not satisfied. Perhaps the most shrewd and significant recruitment move before the 2018 season ever started was the Crusaders’ signing of ex-Munster and Ireland pivot Ronan O’Gara to their coaching staff.

As a foreign coach, it is notoriously difficult to break into the Kiwi coaching system. If you cannot be connected to that system organically, from the grassroots potentially all the way up to the All Blacks, your life expectancy is likely to be short.

Nonetheless, it appears that it was Crusaders’ high-performance Manager Angus Gardiner – prompted by a very positive reference from Racing 92’s Dan Carter – who did most of the chasing. When head coach Scott ‘Razor’ Robertson finally met with O’Gara, it was in a Dublin restaurant only two short months before the start of the 2016 Super Rugby season.

O’Gara was contracted to Racing up to the end of 2019 when he was sounded out, and the family (wife Jessica and the five O’Gara children) will return to their home in Paris in the off-season.

In Northern Hemisphere terms, O’Gara is a coaching pioneer, treading a more varied, multinational path than his forebears – like Stuart Lancaster, who spent a year in 2016 travelling the globe, soaking up as much significant coaching influence as he could. Lancaster finished his tour with an unpaid, six-week stint at Counties-Manukau before the ITM Cup.

The New Zealand viewpoint is even more intriguing. Why recruit an Irish number 10 with 128 caps for his country as a backs coach on the other side of the world? What new intellectual property can he bring?

O’Gara cut his teeth on defence and as a skills coach in Paris, and he seems to play those roles in Christchurch, along with a specific remit for the kicking game and individual guidance of the three fly-halves at the club: Richie Mo’unga, Mitch Hunt and Mike Delany.

Mo’unga was excited by the prospect of being coached by one of the premier game managers of the last quarter-century:

“He was one of the best in the world when he was around. If the rumours are true it would be pretty cool,” he said last year.’

“He would be very knowledgeable from a 10’s perspective. Leon [MacDonald] was a huge help for me this year. He didn’t play 10 but he was an outside specialist. When he announced he wasn’t coming back I was a bit gutted but I’m excited for whoever gets the opportunity and if it’s O’Gara it would be awesome.”

The love is fully reciprocated, with O’Gara commenting:

“Richie’s a freak with the ball in hand, he’s got the capacity to beat defenders – which wouldn’t necessarily ten years ago be the attribute of a first-five. But that happens with Beauden Barrett now and I think other 10s are watching him… Richie does it equally as well and he’s just a really exciting player.”

I believe that there is also an All Black context to O’Gara’s arrival in New Zealand. Establishing the best combination in midfield remains the top priority of the national coaches in the build-up to the 2019 World Cup, and O’Gara is someone with the experience to develop Kiwi 10s in the area where they are weakest: game management.

Beauden Barrett and Damian McKenzie got the nod as starters during the Test series against France in June, but there is a looming possibility that it is Mo’unga who may turn out to be the best of the three in the long term. 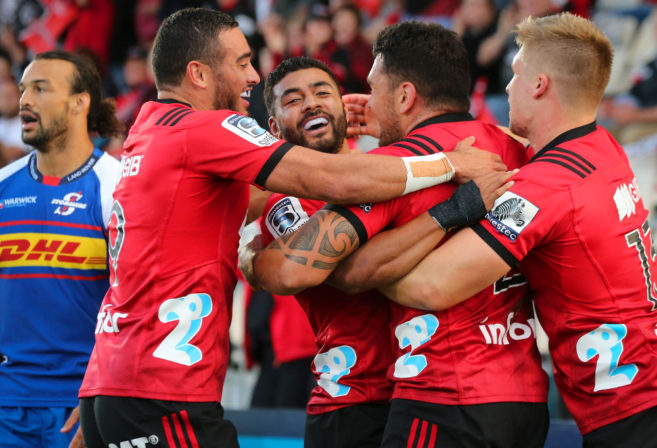 The argument between Barrett and Mo’unga was convincingly won by the new contender rather than the incumbent All Black on Saturday evening in Christchurch, and the game showed that fundamental technical concerns surrounding Barrett as a first receiver remain.

One of the most basic ways of measuring the success of your first-five’s game management is via the kick/pass/run balance, and this area was won convincingly by Mo’unga:

Barrett either opted to, or was forced to, pass far more often than Mo’unga, and passing is his weakest suit. The Crusaders’ man mixed up his game and therefore kept the Hurricanes defence guessing far more. He also ran twice as much as Barrett and presented a greater threat from first receiver.

Mo’unga’s willingness to run created a try as early as the 15th minute of the match:

His ability to vary his position and threaten close to the gain-line was a constant thorn in the side of the ‘Canes defence. It could never afford to write Mo’unga off as a runner and develop line-speed further out:

In the first example, the spacings of the first three defenders are too wide and Mo’unga is able to use his footwork to cut back underneath Gareth Evans and Ngani Laumape and draw the penalty for a high tackle.

In the second, Brad Shields over-reads the exit kick, allowing Mo’unga to pull him on to the fake and break back through the gap between Shields and Toby Smith.

Early in the game, the Crusaders established that they could achieve attacking width by use of the cross-kick – ironically a Barrett speciality:

They hammered the final nail into the Hurricanes’ coffin with another in the 69th minute (at 3:25 on the reel), with a suitable sense of symmetry.

The biggest contrast between the two 10s on the day was in the quality and feel of their passing technique. Richie Mo’unga had four try assists in the course of the game, and three of those came from the hand rather than the boot.

In the eighth minute, Mo’unga demonstrated the importance of staying square to the defender and passing across the body in order to create and manipulate a hole:

Mo’unga stays square right up until the instant he has drawn Julian Savea into the challenge, then he releases George Bridge into the gap Savea has vacated.

Even more impressive was Mo’unga’s ability to execute accurate passes off his left hand under pressure. Back in 2004-2006, I spent many hours admiring (and trying to find defensive solutions for) Ireland’s capacity to attack from left to right with O’Gara’s passing, and the outside speed and footwork of a young Brian O’Driscoll beyond him.

Some of O’Gara’s left-to-right magic appears to have rubbed off on Mo’unga already:

The Crusaders’ first try after the half-time break was engineered by Mo’unga’s double pump to bypass Barrett and precise 20-metre delivery off his left hand to Jack Goodhue near the right sideline (at 2:35 on the reel).

The contrast with Barrett’s deliveries was chalk and cheese:

Barrett has to rotate his body through 90 degrees, to the point where he is facing the receiver directly, in order to make the pass off his left hand – and even then there is no guarantee that it will reach the target. That meant an increase in defensive line-speed and forced fumble in the first example and a back-foot turnover at the breakdown in the second.

Between them, O’Gara and Robertson have also taken a tip from Nathan Grey and shifted Mo’unga away from the heat of the boiler room in the defensive midfield. 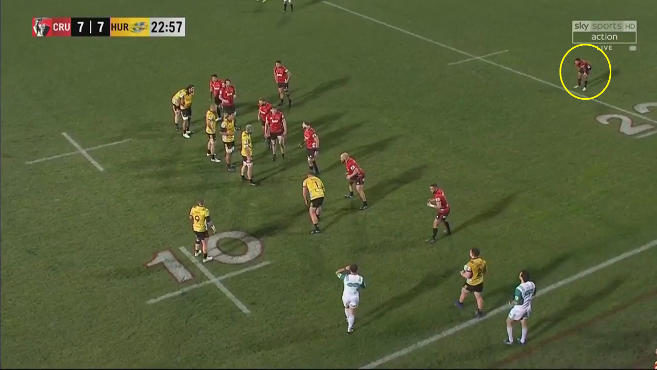 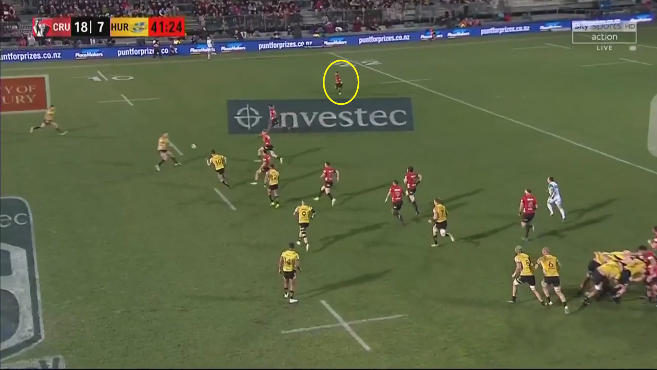 The Crusaders number 10 was frequently to be found defending on the blindside wing from lineout, and as the fullback on the open-side from scrums.

Summary
The signing of Ronan O’Gara by the Crusaders may help open the career pathways of, and provoke a rethink from, a number of ambitious young coaches in the Northern Hemisphere.

O’Gara appears to have been actively pursued by Angus Gardiner and Scott Robertson, and after a difficult rite of passage into New Zealand rugby over the first three months, he is adding real value to the development of the 10 position in Christchurch.

The progress of Richie Mo’unga, in particular, is, of course, a potential blessing for the All Blacks, and that is no coincidence either.

Mo’unga has most of Barrett’s kicking and breaking ability and his passing technique is much sounder to both sides. Would Barrett’s extraordinary athletic gifts not be a better fit for his age group position at fullback, with Ben Smith and Rieko Ioane on the wings?

That question is fast coming to its flood tide with the 2018 Rugby Championship less than three weeks away, and now there is only one of the original three ‘wise men’ left to answer it.