The next chapter: A look at the new Gunners' first game

A new age at Arsenal began over the weekend. In the era of the highly touted manager Unai Emery, there was a sense of fresh excitement and optimism at the Emirates.

Unfortunately, Emery was to be thrown into the baptism of fire that is the Manchester City juggernaut.

Arsenal’s apt signings throughout the summer transfer period were under a watchful eye from Gunners fans in their first league appearance and most of them largely impressed. Young starlet Matteo Guendouzi was tasked to boss the midfield alongside the flippant Granit Xhaka and due to Xhaka’s shaky performance, he was quite compelling in convincing Arsenal fans of his tremendous talent.

Guendouzi was also joined on the pitch by experienced Greek centre-half Sokratis. Despite Arsenal’s faithful being worried about his lack of pace, especially in the face of an explosive City attack, his tactical positioning and general presence removed doubts from the mind quickly.

His defiance was also matched with smart challenges and he was often clearing the box with the use of his head. For the first 36 minutes of the contest he alone tried to manage a flailing back four as Shkodran Mustafi, Hector Bellerin and Ainsley Maitland-Niles struggled to contain City’s attack.

Sokratis will hold a place at centre back and Arsenal will be praying that someone can hold their place alongside him until Laurent Koscielny is fit and returns.

Arsenal fans have risen as one in love for Stephen Lichtsteiner. Playing out of position at left back after Ainsley Maitland-Niles was injured and forced off the pitch, Lichtsteiner bullied his opponents and took a very direct approach into handling Riyad Mahrez on the right flank.

His scrappiness, moaning, push and shove and general ambition to clatter into his opponents is the type of brutality that an Arsenal squad has lacked for some time and it didn’t go unnoticed. Arsenal looked much stronger at the back once he was included.

The signing in which fans were most excited to see was the man who was brought into reignite the defensive midfield dominance of old, Lucas Torreira. Not given a start but being subbed on in the 70th minute for the porous Xhaka, Arsenal seemed to have a much better hand on the game once he was included.

The way that he handled the ball and was so prominent in attacking and defensive structures for his twenty-minute cameo certainly excites the fans and one would only hope that he is afforded a start this weekend coming at Stamford Bridge.

Goalkeeper Bernd Leno was left on the bench with the experienced Petr Cech picked in favour of the new man. All the new signings showed glimpses but the other new man that the fans were excited to see was, of course, Unai Emery.

His famed 4-2-3-1 formation that was so successful at Sevilla was deployed earlier in the contest but due to some less than impressive performances from particular players, it didn’t exactly get deployed in an effective fashion.

Perhaps most surprisingly for many onlookers, the formation saw Aaron Ramsey looking almost as if he was playing centre forward with balls from Mesut Ozil and Henrikh Mkhitaryan often probing towards Ramsey on the break. 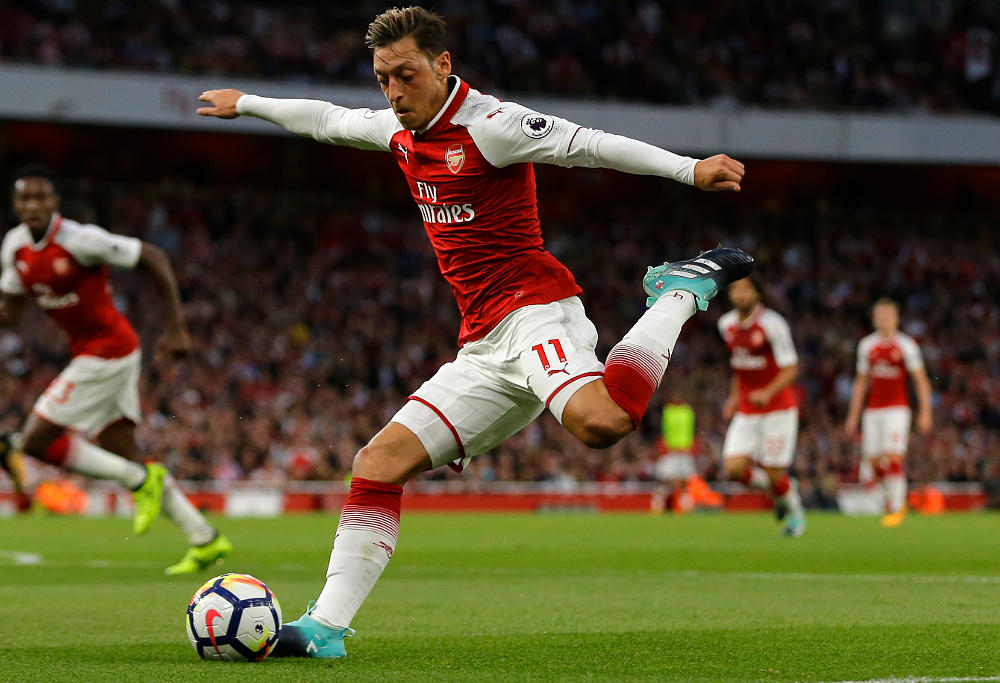 It seemed unnatural and ineffective for the 55 minutes that he was on the park and although Arsenal were facing City who seem to be largely unbeatable, the fact that the attack looked much more threatening with the inclusion of Alexandre Lacazette which tells me that Ramsey may be dropped back to a more natural midfield position next week.

Overall Arsenal have done well enough to not be blown away and be beaten by four-plus goals in a game in which City dominated and there are some shining lights in which the fans can be excited by. It is likely that no one will really come close to City so to come out relatively unscathed and still full of optimism is positive for the Gunners and the fans.