Can John Aloisi coach Brisbane Roar out of the hole they're in?

The Newcastle Jets look like they can still take flight, but it will have been another sleepless night for the Aloisi brothers following the Brisbane Roar’s defeat.

Who on earth would be an A-League tipster? Not that my tips have ever been particularly prescient, but I actually sat down and had a good think about who I thought would win this weekend – and yet again came up with nothing.

That said, it’s nowhere near as difficult as being a coach.

Ernie Merrick probably won’t win any world manager of the year awards on the back of Newcastle’s 2-0 defeat of Brisbane Roar at McDonald Jones Stadium yesterday, but the Jets were good value for their win over the toothless visitors.

You’d have got long odds on Kaine Sheppard and Jair finishing as Newcastle’s goalscorers against the Roar, but the Jets never really looked like losing once the 25-year-old Englishman opened his A-League account.

And Sheppard’s goal was a reminder that there’s plenty of talent on offer in the National Premier Leagues – the Jets signed him from Victorian state league side Avondale – for clubs willing to give some untried talent a chance.

On the other side of the ledger is Jair, and the relief on his face when he scored his first ever A-League goal was palpable.

The Brazilian arrived in Australia with some pedigree – he scored almost 50 goals in a couple of different spells in South Korea’s rough-and-tumble K-League – but at times he’s looked like he’s being played out of position on the left wing.

Yet the 30-year-old can play anywhere across the front third, and it was his decision to drift over to the right-hand side that opened the space for Dimi Petratos – who did well to attract no less than three defenders – to allow the former Roar attacker to hold the ball up long enough for Jair to rifle home.

And didn’t he celebrate? Which is fair enough given that it was Jair’s first goal anywhere since September 2017, following a barren spell at Chinese Super League club Yanbian Funde. 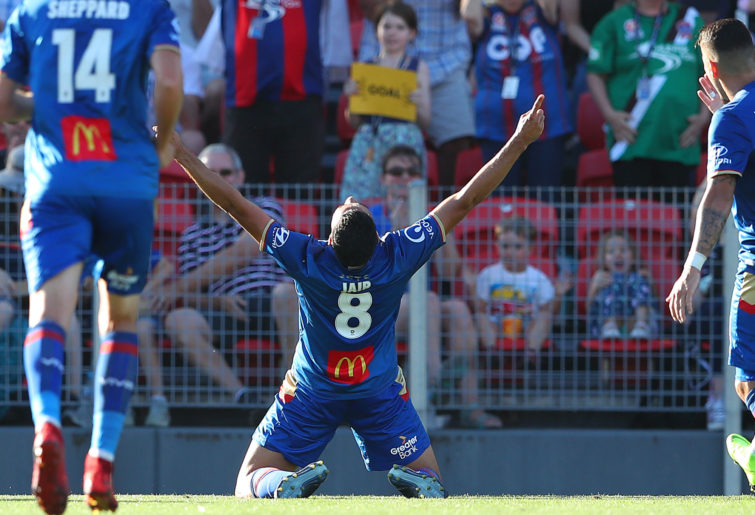 So the Jets proved they can score without Roy O’Donovan, but can Brisbane Roar do so without Adam Taggart?

The sometime Socceroos striker was clearly hindered by a groin injury, but not – it would seem – enough to prevent him from being introduced as a substitute with 20 minutes remaining.

So why not start him? Or was it simply a desperate attempt to try and salvage something from two goals down?

Perhaps a more pertinent question is how can a team sheet containing names like Jamie Young, Avraam Papadopoulos, Alex Lopez and Eric Bautheac conjure just one win so far this season?

And why is it that despite adding attacking talents like Tobias Mikkelsen, Stefan Mauk and even their own former NPL player in Dylan Wenzel-Halls, do the Roar rarely look like scoring unless Taggart is on the end of things?

If nothing else, yesterday’s defeat was another reminder of the value of having a reliable goalscorer at the focal point of an A-League attack.

Try as he might, the 33-year-old Henrique clearly isn’t the man to lead the line for the Roar – club legend though he may be.

And at some point, the question must surely be asked of whether John Aloisi is the right man to lead Brisbane Roar, even if he is an icon of the Australian game.

What many Roar observers would like to see – and I count myself among them – is for Aloisi to literally coach himself out of a hole.

But things just aren’t happening at the moment.

And suddenly Friday night’s fixture with a rampaging Melbourne Victory at Suncorp Stadium looms as a make-or-break encounter.

At the end of the day, no one wants to see coaches get sacked.

But on the back of yet another deflating defeat, Brisbane Roar may soon find themselves needing to ask some tough questions.