Melbourne's attack might be best represented by their least definable player

James Troisi is a player to whom labels do not quite adhere. It makes him a little hard to digest.

A lot of what Troisi does is conducted at a helter-skelter pace. In the opening five minutes of last night’s win over Brisbane, Keisuke Honda received the ball from Ola Toivonen. Under no small amount of pressure and with Brisbane Roar defenders closing in cautiously – not wanting to be embarrassed, hoisted by some dreamy nutmeg after a lurching challenge – Honda passed it, sharply but without hostility, to Troisi.

The ball ricocheted off Troisi’s foot, a touch as heavy and regrettable as a Tennessee Williams ending, and possession was turned over. It was as if Troisi’s instep had sprung prematurely into action, dribbling off before the ball had arrived.

Then, a few minutes later, a hacked Melbourne clearance was sent spiralling up the pitch towards Troisi. Here, he chested the ball down to a teammate rushing ahead of him, an almost reflex decision – a very good one – made in the flurry of flight.

Troisi bustles, can get ahead of himself, can over-commit and frustrate as a result. But there is no denying his energy, or the satisfaction his contributions bring when the at-speed machinations align. It’s a little like shooting skeet: bang, bang, bang, miss, miss, miss, and then all of a sudden the aim is true and the shot connects, and it all seems spectacularly effective and deliberate.

He has his softer, more considered moments too, but even they must be taken advantage of almost right as they appear. For Melbourne’s first goal against the Roar last night, Troisi was gifted the ball after a blundering sequence, missed clearances and tackles spilling the ball this way and that, and then to Troisi.

He turned, saw Kosta Barbarouses making a run that could only be viably passed to in the next second or two. The distance between where the Kiwi might receive the ball, and where the goalkeeper might rush out to thwart things, was closing. Troisi dinked the pass, right on the money, and Barbarouses finished. It was lovely, but had Troisi pondered on the decision, the window of opportunity would have snapped shut.

Of course, such is his nature, he didn’t. 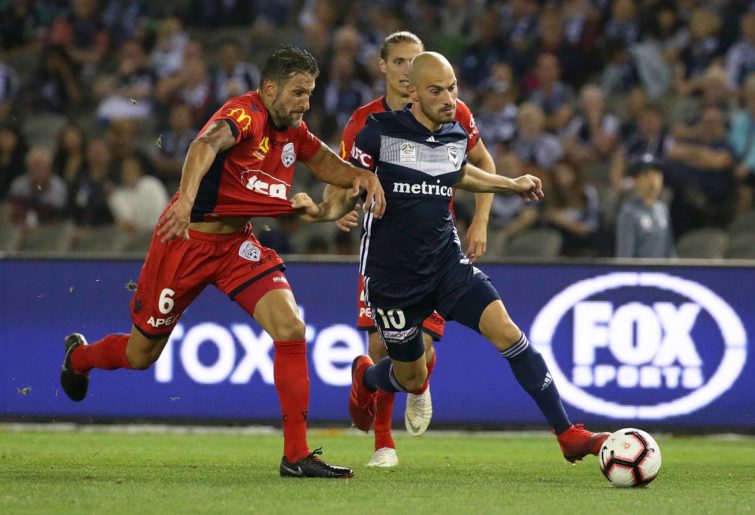 Troisi’s place in Muscat’s new 4-4-2 diamond is one justifiably questioned, but not necessarily because of what Troisi does or doesn’t offer. It’s more a matter of displacement, namely of Terry Antonis. Antonis has been electric over the last few weeks, after Troisi’s injury and illness gave Antonis the opportunity to assume the position at the central diamond’s point.

Troisi also roams around a lot, and when you have two better passers in Antonis and Honda placed further out toward the wings, to see Troisi sidle over and bunch up the wide play, or roam forward, take up positions ahead of Barbarouses, and vacate the No.10 position, well, it all seems a little out of order.

But maybe Muscat doesn’t want a more traditional 10, which is what Antonis or Honda placed at the diamond’s tip would be, certainly more so than Troisi. Perhaps he wants these two deep pools of creativity to tip inwards from the wings, trickling into the centre, or overloading defensive responsibility on the league’s full backs rather than the central defenders and defensive midfielders.

For Honda – who is talented and prominent enough a player to involve himself centrally in the attack wherever he’s placed in the formation – this is working well. Antonis is more marginalised. Terry Antonis conjured a wonderful nutmegged backheel in the build up to Victory’s second goal, playing through Corey Brown, right up against the left wing, who duly crossed for Toivonen.

These silken touches and attacking instincts are better utilised in the middle, and if we considered a comparison between Antonis and Troisi in a vacuum, the choice of who should be centrally positioned, and who’s the better ersatz winger, is clear.

But in a vacuum football is not played. Perhaps Muscat’s plan isn’t to play his attackers in their natural roles, and his methods aren’t as dictated by compartmentalisation. Maybe constant movement, revolving positions, and the sense that everyone might play everywhere is exactly what Muscat is pursuing.

Certainly the passing move that led to the penalty that gave Melbourne their third goal was a blur of players popping up in unlikely areas, all contributing, all willingly and fluidly interacting.

A symphony relies on different sections of the orchestra taking and ceding the lead; trumpets blast out the fanfare, the strings arrive with a soaring motif that commands the ear, suddenly a swell of woodwind and percussion shakes the foundations, and the majesty is produced in concert, without prescription, with multiple elements sloshing around one another.

The Victory even threw in a corner routine, as perfectly executed as the one Muscat dreamt of when he conceived it. Like clockwork it ran; from Honda, to Troisi, then finally to Barbarouses, who hooked the ball home cleanly. Their first half, with four goals scored and two conceded, had more football in it than most entire matches. It was a feast.

The second half saw Toivonen drift out onto the wings, intending and indeed duly going on to play in a streaking Troisi or Barbarouses rushing through the middle. At other times, Toivonen himself held a central position, ready to dart in behind.

For all of his six feet and three inches, Toivonen is not a traditional striker; he wants to set up teammates, to involve himself in the tactility of build-up play, to arrange for regular rendezvous with the ball – “Let me steal a kiss, my darling.” He is another part of this fluid attack, in fact, one could argue he’s the catalysing element.

Ahead of Carl Valeri, the Victory are a formless threat, even more potent when the full backs get forward. There are no positions, and there are all of them. Honda was seen, as the 4-2 defeat of the Roar wound down, drifting back into the deep midfield, or out on the wing with Storm Roux lingering ahead of him.

The risk here is that, in such a fluid attack, this lack of structure might cause the team to topple and come crumpling to a heap, more a mess than it is a coherent system. Although it’s very hard to quantify this, the sense is that the endless discipline of Honda, the extraordinary dedication he has to improving himself and drawing golden fibrils of ambition out of his teammates, is the hoop that holds this all together.

What the system needs is enthusiasm, constant positive and supportive movement, effort and generosity. In stoppage time, Honda burst down the wing, crossing in the hope his team might score a fifth goal, such is his ravenous desire for more. “I was not satisfied today,” Honda said after the game.

That indefatigable spirit, along with Toivonen’s unique forward play, Antonis’s subtlety and Barbarouses’s dashing pace and, yes, James Troisi’s slightly unwieldy, vague and woolly talents, are all the ingredients Muscat has combined in this rare alchemy.

The league’s most exciting attack.