If this were a timeless Test, Cheteshwar Pujara could bat until July

And so to the grand old dame that is the Sydney Cricket Ground, and whatever the state of any Test series – and it’s never usually a decider – then it’s … well, you just have to go.

It’s just a cracking stadia, the SCG, so full of ghosts and good times, and for mine – with apologies to Victorians – it’s the Home of Cricket in the nation.

Friend, you can stand up in a members bar or tool about on a stool, and drink a cold beer, and watch cricket as if you’re at the pub.

It’s like being at the pub except the entertainment is an international Test cricket match, happening live in the park outside the window.

How good is that?

Answer: That is very good. That is man-fun writ large.

The SCG is magnificent. 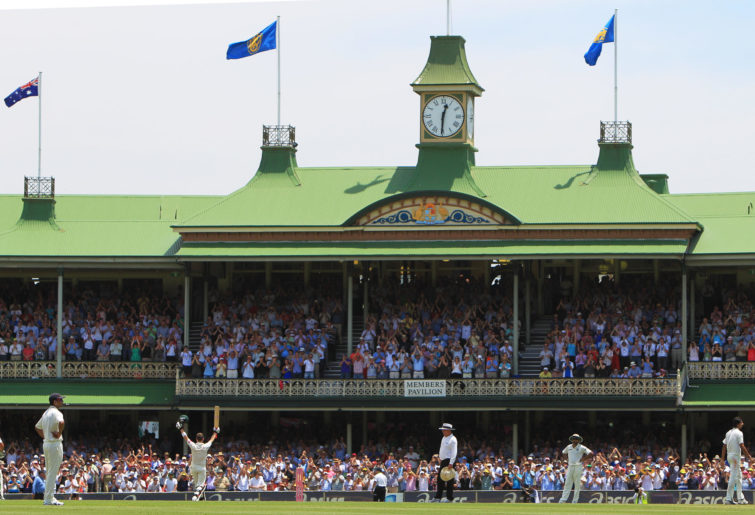 A Test match at the SCG is a must. (Photo by Steve Christo/Corbis via Getty Images)

As are these Excellent Indians who’ve been so impressive, no-one more so than The Rock Wall of Saurashtra, Cheteshwar Pujara, a genuine Test bat whom our little slashers, whackers and burners could learn much from, namely that you don’t have to hit every ball with the bat, and indeed ‘leaving’ the ball can be quite effective.

Pujara has shown the value in spending an entire innings, 300 balls plus, getting “in” and staying “in”, because as long as you’re “in” you’re not “out”, which is bad.

And you would suggest any batter approaching the elite golden pyramid bricks of Test cricket would have some awareness of this, or have an appreciation of it, that you have to be “in” to score runs.

But there you go – the current crop of whackers took more from Adam Gilchrist and Matthew Hayden than from Chris Rogers and Mike Hussey, and thus back themselves to whack the ball with the bat when they should learn to leave well enough alone.

And all these people could learn the power of the leave, and the value of going after only the sweetest fruits.

Aaron Finch? Time has come and gone, for mine, old friend, unless you head back to the Shield and grind out many thousands of runs off many thousand more balls.

And the way to do that is to leave most everything through to the keeper.

Won’t be easy for a bloke who’s so good in short-form cricket.

But if Aaron Finch wants to play under the baggy green again, he needs big runs earned over long periods. Bat out the day. Sweat up a treat.

Just don’t get out.

It’s the new way. It’s how things must be. We need a rock to just … be in. To not be out. A sheet anchor. An oldie but a goodie.

We need our own wall.

Usman Khawaja would appear to be the best bet. Though he’s now opening with Harris and Marnus Labuschagne – whose leg-spinners threatened only the health of children on the boundary – is batting No.3 and … well.

Australia needs a rock. A wall. And if Marnus is that rock wall then … good.

Yet he’s not among the top-15 Sheffield Shield averages this season and his leggies are like Michael Bevan’s except very bad.

Anyway we need a rock who doesn’t get “out”, especially against these Indian bowling people who are red hot. How about old mate Jasprit Bumrah? What a ripper.

Gideon Haigh wrote a funny thing in the Oz the other day about his run-up, wrote that Jasprit looks like a man pretending to ride a horse, prancing along, like air guitar equestrian.

But then he’s into it, Jasprit, into that funny little delivery stride, and he’s all height and strength and extra-whippy long arm angles, mighty long levers of the condor, all action, and he’s going across ‘em or away, but mainly he’s at their ribs, at off peg, just at ‘em, at speed, all spell.

And the wickie’s a little beauty, too, old Cheeky Pant. How about that picture of him “babysitting” Tim Paine’s kids? Ha – high comedy.

And the captain’s a phantom menace with Eyebrows of Evil, and this Sydney Test match will continue to be just that for our beleaguered cricket nation, which is no bad thing on occasion, I reckon we’re better underdogs than overlords, and wrote of it, the humility will be good for us.

In the meantime I do hope we win.

Couple Indians in the way though, not least Rock Wall Pujara, whom you couldn’t extract with a Bobcat Excavator.