At the beginning of each AFL season every player across the competition hopes to improve their performances of the last season and years prior.

For some, their form level in the past has seen them drift in and out of the senior team. For others, their true ability at the top level has been questioned.

A large number of players will weigh up their future across the season, while others will be battling to prove to their current employers that they deserve to stay beyond their expiring contracts.

Here’s a look at the players who need to step up at each AFL club.

Hawthorn: Jonathon Ceglar
As things currently stand at the Hawks, 27-year-old Ceglar is very much the club’s No.2 ruckman behind Ben McEvoy. In 2019 Ceglar will be aiming to prove that both he and McEvoy can operate in the same team. Adding more goals to his game could be the way to do so.

Melbourne: Jay Kennedy-Harris
Throughout 2018 Kennedy-Harris was often racking up huge numbers at VFL level as an inside midfielder, but he failed to replicate that form at the top level, although he did face stiff competition for that role. If he doesn’t hold down a regular position for the Dees this season, could a fresh start be exactly what he needs?

North Melbourne: Nathan Hrovat
Hrovat’s move to North Melbourne was meant to see him take his game to the next level, but things haven’t quite eventuated that way. With the Kangaroos adding more midfield depth in the off-season, he may be forced to settle for more time in the VFL.

Port Adelaide: Karl Amon
Amon was reportedly on the trade table during the trade period, with Hawthorn reported to be his club of choice. In the end he remained in South Australia, and he could be a major winner in Chad Wingard’s departure to the Hawks. If he can lock that position down, he may lock down his future in the AFL.

Richmond: Connor Menadue
Right now the Tigers side may be the hardest side in the competition to break into and hold your spot, as Menadue has discovered in the past two seasons. In his first four seasons in the competition he has 33 games to his name. How much he improves that tally this season will make for interesting viewing.

St Kilda: Jack Billings
The fact Billings was selected before Marcus Bontempelli is a talking point the 23-year-old will always have to face in his career. At stages he has given fans glimpses of what he could produce consistently, while at other times he has looked like a player just holding their place in the team. Now is the time for Billings to deliver on his talent.

Sydney: Zak Jones
Jones often lets him and his team down with silly indiscretions, a factor which needs to come out of his game this season.

Western Bulldogs: Tom Liberatore
Liberatore has it all to do in 2019 as he prepares to return from a second knee reconstruction suffered in 2018. When he was at the peak of his powers, ‘Libba’ was regarded as one of the best inside midfielders in the league. Like many of his premiership teammates, Liberatore has taken backwards steps since 2016 and could be fighting for his career after signing just a one-year deal.

West Coast: Lewis Jetta
It may sound strange that a premiership player could be facing a career-defining season, but that’s the case for Jetta. Despite claiming his second flag, Jetta often had his consistency questioned in 2018. How the 29-year-old responds in 2019 could be key in the Eagles’ premiership defence. 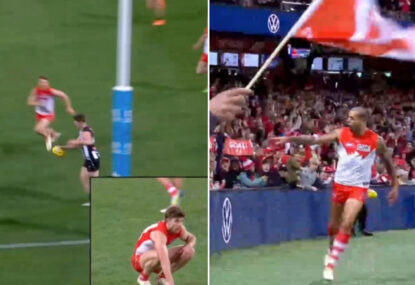