It shouldn’t be contentious to say that Mitchell Starc is far from his best with the ball this summer. But saying so can draw fire from those close to him.

“There’s a lot of talk about Mitchell Starc, but I think it’s coming from a lot of his critics rather than anyone else,” was the pointed rejoinder from coach Justin Langer on ABC Grandstand after the Brisbane Test last week.

The idea of a vendetta against Starc is strange. He’s pleasant and friendly, one of the most thrilling players on the planet when on song, and is married to one of the most exciting talents in the women’s game, Alyssa Healy.

He’s public-relations gold. But his recent struggles are simple fact.

Against a frail Sri Lankan batting side on a bouncy Gabba track, his bowling colleagues feasted. The visitors were routed twice for under 150. Starc picked up two tailenders in the first innings and went wicketless in the second.

Of course, bowling is notoriously fickle. A day of beautifully crafted deliveries might not yield a wicket, while half an hour of junk grabs five.

But Starc’s pitch map at the Gabba looked more like a star chart. He bowled everywhere. In the second innings, his frustration at least created pace: the speedometer read 147, 149, then topped 150.

But bowling to Sri Lanka’s number eight, whose thumb had been crushed by Patrick Cummins in the first innings, speed still didn’t equal incision. Dilruwan Perera looked unflustered in blocking and nudging singles.

It brought to mind the WACA in 2015, when Starc famously hit 160 kilometres an hour. Less remembered is that Ross Taylor calmly defended that ball to mid-off. Speed alone isn’t enough.

Over the course of this summer, Starc’s erraticism has been ongoing. His spells haven’t built a certain kind of pressure or worked towards a clear plan.

In Durban just under a year ago, he opened an ill-fated series against South Africa with two displays of wicked reverse swing, winning the Test with nine wickets in two innings. Since then, he has 22 wickets in 17 innings.

His average over that period has blown out to nearly 47, and his strike rate to a wicket every 84 balls. Before this flat patch, his wickets cost less than 27 runs and came every 47 balls.

Nor has he taken influential wickets. Across two Tests in the UAE, where Australia’s bowlers at times put Pakistan under pressure, Starc picked up the often sloppy opener Mohammed Hafeez twice, along with a couple of tailenders.

In Adelaide, where Australia should have won after a dominant bowling show on the first day, Starc’s contribution was the struggling opener Murali Vijay and a couple more bowlers.

When he did pick up some marquee names, it was Cheteshwar Pujara caught down the leg side in Perth, then Virat Kohli and Rishabh Pant smashing late runs from a dominant position in Melbourne.

Starc bowled a ripper to get Ajinkya Rahane in Sydney but didn’t take another in the match.

Pointing these things out will be construed by some readers as deriding the player. But responses like Langer’s are overly prickly. It’s just being realistic that a fine bowler is off the boil. 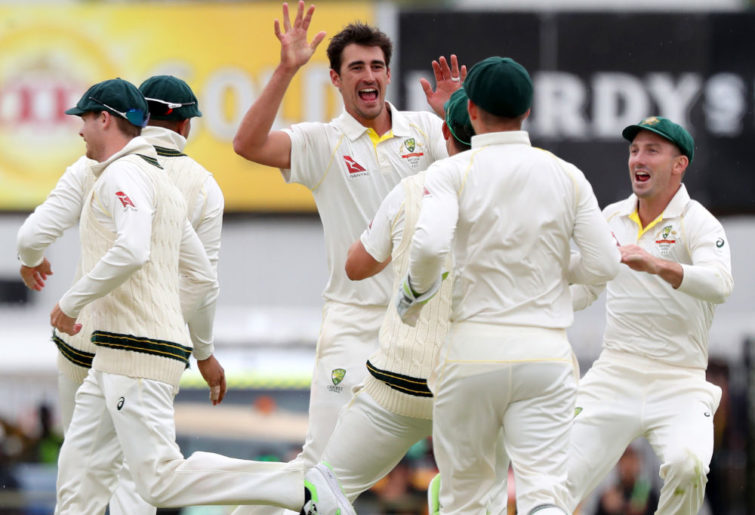 The response around the Australian team has been to hope this will fix itself. “The thing is with Starcy, you always feel he is going to break open the game at any point,” said Cummins in Brisbane. “I would love him to take a couple of wickets and click because I don’t think he is far away.”

Maybe he’ll suddenly take a bag in Canberra this week. Or maybe more substantial problems need addressing. This isn’t a question the casual observer can answer, it’s one that experts around the team are paid to figure out.

Are there technical issues with his action? Would he benefit from time off? I interviewed Mitchell Johnson a couple of years ago about struggles with the touring schedule.

“When you’re in that bubble it’s really hard,” he said.

“You know there are things you need to work on but you just don’t have the time. You’re going from one hotel to the next. You can’t do it in a game, because you haven’t practised it.”

Starc is probably the most constantly in-demand player across all formats since Johnson around that 2011 era. If anything is awry, Starc may well face the same problem in addressing it.

There’s also the question, whether fair or not, that plenty of observers are asking about the correlation with sandpaper suspensions. In an era when Australian fielders have to be extremely conservative with the ball, there have been no notable spells of reverse swing since the second Test in Port Elizabeth, in 2018.

But then, Starc doesn’t need reverse in one-day cricket. In that format, he does his damage with the new ball and conventional hoop. And his next big assignment is the 50-over World Cup.

This could be the trigger to get Starc back to his best. He was player of the tournament in 2015, taking his 22 wickets at an eye-watering average of 10.18 and a strike rate of 17.4.

Find me a supposed critic who doesn’t want to see a bowler that good performing at his best.

Not that Starc can just replicate such a performance, especially after playing relatively few ODIs in the past couple of years. But the coming months will contain plenty. Perhaps the clarity and simplicity of the shorter form will help him find his groove.

You’d hope that those in the national setup will help as well. Or that they at least have a better strategy than insisting there’s no problem. For the sake of the game, it would be good to have him back.