Essendon aren't the finals lock you think they are, and here's why

Essendon have been all the rave this off season in the football world, with many pundits predicting them to make the top four.

At the very least they’re predicted to get back into September action, which they missed last year after a horrible first half of the season.

I think the main reason for this is because the Bombers won seven of their last ten games last year, to narrowly miss the finals.

However, they had an easy draw in the back half of the season. They beat Port Adelaide, St Kilda, Sydney, Fremantle, Gold Coast, North Melbourne and West Coast in those games.

Granted, the West Coast win was fantastic – beating them in Western Australia is incredibly difficult.

Barring that, they only beat one team who made the finals in Sydney, who lost to Gold Coast the week before.

The positions, at the end of the year, of the teams they beat on that run, were: ninth, 17th, 14th, 16th and tenth. Hardly good opposition.

I think the main question is always where a team can improve, and whether they can improve more than the teams above them and around them.

Essendon aren’t, and won’t be, better than any of Richmond, Collingwood, Melbourne and West Coast this year.

They simply don’t have the talent or system to do that. Greater Western Sydney have more scope to improve than Essendon, as do Adelaide, who played in a grand final two years ago.

That’s six teams who are more talented than them, and you could easily argue that Geelong’s midfield in Patrick Dangerfield, Gary Ablett, Joel Selwood, Mitch Duncan and Tim Kelly can see them still play finals football.

Essendon were active again in this year’s trade period, trading in midfielder Dylan Shiel from Greater Western Sydney. Club and supporters alike were excited by that acquisition.

The thing is… he’s not that good. He’s never averaged more than 28 disposals across a year, and never kicked more than fifteen goals.

Essendon’s midfield was a major issue last year, and I can’t see that changing this year.

McGrath is unproven, and Shiel and Heppell aren’t great by foot. Tom Bellchambers isn’t even close to the top five ruckmen, so they won’t be getting first use again either. 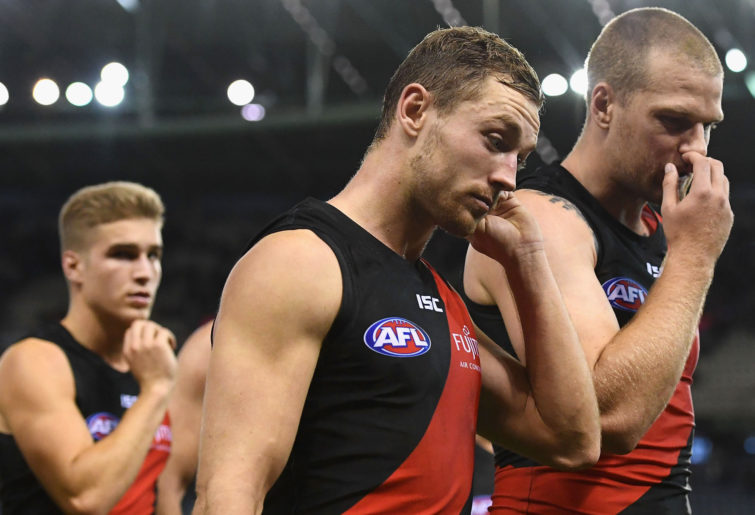 The defence is still worrying. Hooker and Hurley are both very good defenders, the former is probably top three in the league. However, the lack of depth in that back six is astounding.

Marty Gleeson, Conor McKenna and Adam Saad will come undone against the good teams. Saad and McKenna just don’t have a football brain – yes it’s good to take the game on, but the amount of times they got caught running out of defence last season needs urgent attention.

The forward line is better, however it isn’t fantastic. The fortunes of Joe Daniher could make or break Essendon’s season.

Without him, Shaun McKernan and James Stewart just aren’t going to get it done as the two pillars of the forward line.

Nobody really knows where Daniher is at. Some people are saying he will be fine to play in Round 1, and some are saying he’s struggling to train still.

Jake Stringer and Anthony McDonald–Tipungwuti accompany him to make a good small forward line. But again, they need Daniher there.

The game plan probably needs an overhaul too, if they are going to be a top team. When you look at all of the top teams of the last few years, none of them have had that free-flowing, all-out attack game plan the Bombers do.

Hawthorn relied on precise kicking, moving slow or fast, to win games. Richmond play a somewhat scrappy game, and always win the territory battle which leads to scores, and also an easy transition back into defence. The Western Bulldogs played a similar brand in the year they won their premiership.

A game plan that revolves around attacking and playing on at all costs, will simply not work in the modern game. It’s the exact reason that Essendon conceded such a big amount of goals most weeks last year.

For those people saying that Essendon are a ‘lock’ for the finals – well, they are kidding themselves.

They have major question marks all throughout their team. Starting from their depth in their best 22 (and especially their depth from that 22 – 26 player mark), to whether Joe Daniher will be fit, and whether they have enough improvement in them, to go past seven or eight pretty good teams.

Essendon could make finals – but it’s far from a done deal.