A congested Road to WrestleMania pay-per-view schedule continues this Sunday (Monday 11:00am AEDT in Australia) as WWE presents its Elimination Chamber event from Houston, featuring the superstars of both RAW and SmackDown.

In one of the two elimination chamber matches, six of the blue brands best vying for the WWE Championship inside the unforgiving steel structure. In the other bout, six teams will fight for the honour of becoming the first ever Women’s Tag Team Champions, in yet another step forward for the Women’s ‘Evolution’ – as it has been so often referred to as – in the WWE.

The undercard will undoubtedly produce its share of intrigue and memorable moments as well, with plans for WrestleMania continuing to become a little more clear as the WWE’s slowly approaches.

Also participating in that match was Akira Tozawa, who earned yet another shot at the title – this time in a one-on-one environment – when he won a No. 1 Contender’s Match on the February 5 episode of 205 Live.

It would be disappointing to see Murphy’s impressive title reign come to an end so abruptly, and in a match which has garnered little fanfare due to the weak buildup.

There are a number of exciting challengers to Murphy’s title reign aside from Tozawa – himself a former Cruiserweight Champion – which makes a victory for the Australian the most likely outcome for what will nonetheless be an exciting affair.

No Disqualification Match
Braun Strowman versus Baron Corbin
A No Disqualification stipulation has been added to this match at the last minute, a wise decision given that it otherwise looks like a typical RAW match-up; not exactly worthy of a PPV to say the least.

It has been particularly frustrating following the career trajectory of both Strowman and Corbin in the last few months, with both men seemingly treading water despite showing promise at various stages throughout 2018.

Strowman in particular has struggled to capatalise on the momentum produced through various efforts of prodigious strengths and chaotic destruction in the last 18 months, as the WWE seem at a loss as to which direction they should push him next.

Strowman’s quest for the WWE Universal Championship came to an abrupt end following the Crown Jewel event in November, as Brock Lesnar defeated him in a mere three minutes and 16 seconds. It was Baron Corbin’s interference in that match – which played a part in Strowman’s loss – that established the feud between these two men.

However, a scheduled match at December’s Tables, Ladders andamp; Chairs event never came to fruition due to an injury suffered by Strowman, who still made a surprise appearance to help the RAW roster beat up Corbin, pinning “the Lone Wolf” to make the victory official.

As a result of this defeat, Corbin was stripped of his duties as the ‘constable’ of RAW, resulting in him losing all authoritative powers over the rest of the roster. Strowman also defeated Corbin in the Royal Rumble match the following month.

In the weeks leading up to Elimination Chamber, this feud has lost much of its luster, as Strowman has already proven his superiority over Corbin, thus giving fans no real reason to invest in their rivalry.

The addition of the ‘No Disqualification’ match should add intrigue, but fans will no doubt breathe a collective sigh of relief once this feud comes to an end following an almost certain Strowman victory.

Handicap Match for the Intercontinental Championship
Bobby Lashley (c) and Lio Rush versus Finn Balor
While many fans have been quick to demonstrate their displeasure about Balor’s involvement in a feud with Bobby Lashley, considering he is coming off a Universal Championship encounter with Brock Lesnar at last month’s Royal Rumble, there is actually good reason to get excited about seeing how this feud plays out.

There is an added element of excitement in the form of Lashley’s hype man Lio Rush, himself an experienced in-ring competitor with plenty of charisma to boot, but it also gives the Irishman an opportunity to show that he has what it takes to defeat larger competitors such as Bobby Lashley, especially after his courageous yet ultimately disappointing outing against Lesnar.

A Finn Balor victory over Lashley will go a long way toward proving that he indeed has what it takes to defeat Brock if the two men fought again, particularly given the similarities that Lashley has with the current Universal Champion in regards to his athletic pedigree as well as MMA background.

Expect to see a Balor victory in this bout following a finish in which Lashley does not lose, resulting in this feud continuing following Elimination Chamber. I, for one, would not complain if this feud indeed lasted until, and came to a head at, WrestleMania.

Elimination Chamber for the Women’s Tag Team Championship
Nia Jax and Tamina versus The Riott Squad (Liv Morgan and Sarah Logan) versus Mandy Rose and Sonya Deville versus The IIconics (Billie Kay and Peyton Royce) versus Bayley and Sasha Banks versus Naomi and Carmella
Following on from last year’s Elimination Chamber, which saw women compete inside the Chamber for the first time, this year’s event sees the top six female tag teams in WWE vie for the opportunity to be crowned as the inaugural Women’s Tag Team Champions.

In a somewhat unpredictable field, Nia Jax and Tamina stand out as the favourites following their devastating performances over the past few weeks, and in the case of Nia Jax a standout year in 2018 which saw her win her first Women’s Championship, and go toe to toe with Ronda Rousey.

Following closely behind are fan favourites Bayley and Sasha Banks, who no doubt will be heavily supported by the crowd in Houston, as well as most of those watching at home. However, the re-aggravation of an already existing shoulder injury by Banks may have severely hurt their chances before the match has even begun.

The team of Naomi and Carmella stands out as the least likely duo to emerge with the gold, given their inexperience as a tag team.

WWE RAW Women’s Championship Match
Ronda Rousey (c) versus Ruby Riott
There have been very few occasions in the history of WWE Pay-Per-Views in which the outcome of a championship match has been so certain. 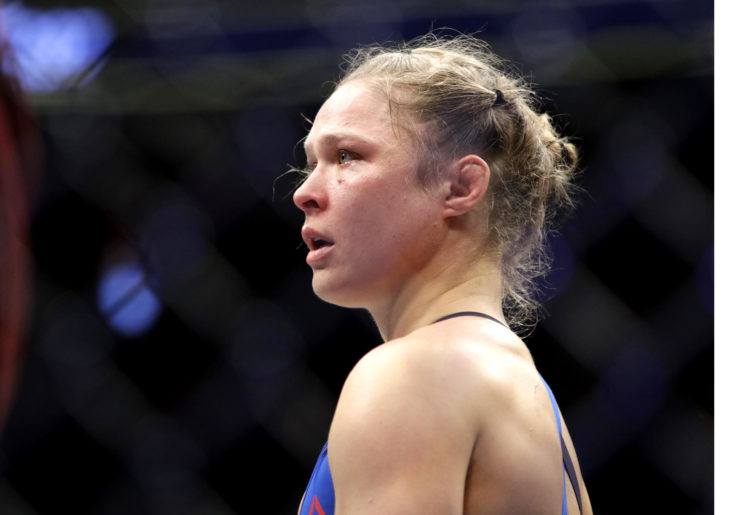 With Ronda Rousey already involved in a rivalry with two potential WrestleMania opponents, and the WWE already having advertised her on its website as defending the title at WrestleMania – first against Becky Lynch, then Charlotte – Ruby Riott has been a mere afterthought in the buildup to this encounter; a shame given her talent.

Nonetheless, it should be an entertaining, yet predictable, ¬WrestleMania warm-up for Rousey, as well as a chance for Ruby to exhibit her talents in a big match environment.

In a testament to The Miz’s ability to make almost everything he’s involved with entertaining, while also giving credit to Shane’s talent, the two men have emerged as one of the most entertaining parts of SmackDown, and should continue their impressive momentum with a win over former champions The Usos at Elimination Chamber.

While an eventual feud between The Miz and Shane McMahon is probable going into WrestleMania, it wouldn’t be the worst thing if they stayed together.

That being said, their championship reign and the limelight placed upon them comes at the expense of many other talented duos in the tag team division, so perhaps it would be for the best if Miz and McMahon went down singles paths sooner rather than later.

In the case of Shane McMahon, this current run may only last a couple of more months at the most before he is off television once again.

Elimination Chamber Match for the WWE Championship
Daniel Bryan (c) versus AJ Styles versus Jeff Hardy versus Randy Orton versus Samoa Joe versus Kofi Kingston
The last time the WWE Championship was defended inside of the elimination chamber a new champion was crowned, as Bray Wyatt pinned AJ Styles to win his first title at the 2017 event.

As it pertains to the 2019 edition, Daniel Bryan will do all he can to ensure that trend doesn’t continue, although it will be a hard task given the level of competition he is facing. This past week on SmackDown, all six participants were involved in a highly entertaining gauntlet match, with Randy Orton emerging victorious following a surprise RKO on AJ Styles for the pinfall.

The surprise packet – which shouldn’t come as too much of a surprise given his decade long tenure in the WWE – was New Day member Kofi Kingston, who remained in the match for over an hour, eliminating Jeff Hardy, Samoa Joe and WWE Champion Daniel Bryan before being eliminated by Styles.

Not among the original six competitors, Kingston was named as a replacement for the injured Mustafa Ali, who himself has had an impressive run since his debut on the blue brand last December. Although he will inarguably be a crowd favourite going into the match, particularly after his aforementioned performance this past week on SmackDown, it is difficult to imagine Kofi leaving as WWE Champion.

Furthermore, no other contender in the match stands as a clear cut favourite to pry the gold from the champion’s desperate hands. While RAW has already established which two men will be vying for the brand’s top championship at WrestleMania, SmackDown has yet to determine who will be involved in the brand’s main storyline going into the company’s showpiece event.

For that reason, as well as the fact that his title reign has just begun to hit its stride, expect Daniel Bryan to retain the gold. Any other outcome should be considered a momentous upset.

And so concludes my review of WWE’s Elimination Chamber. Will you be watching? Do you agree with my predictions? Do you even care about wrestling? Let me know in the comments below. Thanks for reading.