The AFL and state leagues are on a collision course

While the media spotlight is on the AFL this week with Round 1 commencing a host of local clubs around the country are also preparing for the 2019 season.

This is the case for SANFL club South Adelaide who announced last week that new recruit Hayden McLean had departed the club to join the Sydney Swans.

The 20-year-old only arrived at South Adelaide from Sandringham at the end of last year and was expected to be a key player for the upcoming season.

New rules allow AFL clubs to add players to their list in the off-season (supplemental selection period) between December 1st and March 15th when a spot on their list becomes available when a player is placed on the long term injury list.

A knee injury to Jack Maibaum opened the door for the Swans to take advantage of this new rule which has seen a host of players earn a spot on an AFL list in the same fashion.

South Adelaide CEO Neill Sharpe while extremely happy for McLean getting his chance at the highest level also acknowledged it leaves a massive hole at South Adelaide on the eve of the new season.

“As an individual, we are extremely pleased to see Hayden realise his dream of making an AFL list. It is however very disappointing for our club to lose one of our key recruits on the brink of the new season.” 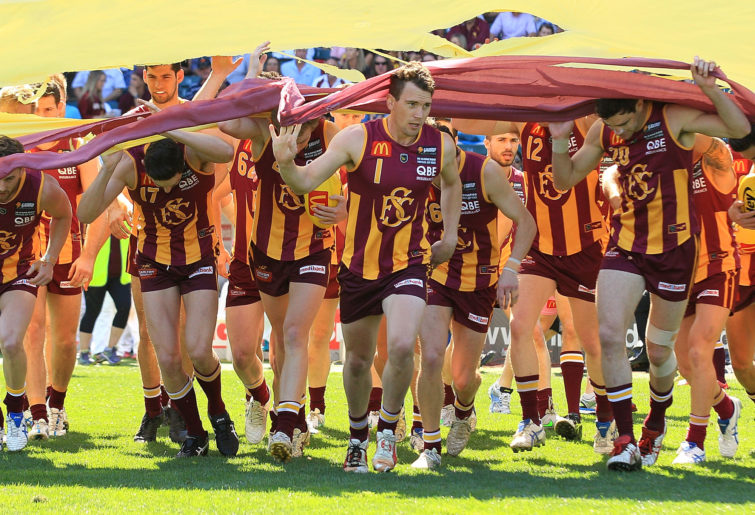 Kyal Horsley of Subiaco leads his team thru the banner during the WAFL grand final match between Subiaco and West Perth at Domain Stadium on September 27, 2015 in Perth, Australia. (Photo by Paul Kane/Getty Images)

Mid-season draft
While the above is less than ideal for South Adelaide it begs the question on whether the AFL needs to give more consideration to second-tier competitions with the implementation of such rules and what compensation should be in place.

In addition to the supplemental selection period, we will see the introduction of the mid-season draft for the first time since 1993.

It might be a stretch to suggest this has the possibility to completely derail premiership aspirations for a team that loses a player to AFL level during the year but it certainly doesn’t help.

SANFL and WAFL management both share concerns around the impact the draft will have on their respective competitions.

WA Football Commission CEO Gavin Taylor has been particularly strong in his views and these sentiments have been echoed by SANFL CEO Joe Parkinson.

“While we naturally want to encourage players to aspire to the highest level, we do not believe that should come at the expense of clubs who are trying to win an SANFL premiership only to have their best players cherry-picked midway through the season”

The worry from lower competitions is logical. But offering another pathway to AFL level for talent outside of the traditional draft has rightly been applauded by many as a positive.

A foot in both camps
As a member of both an AFL and SANFL club I find it intriguing the differing views on the draft adjustments that have transpired.

Make no mistake about it, SANFL fans are extremely passionate and loyal and some of these fans simply have no interest in the AFL competition.

This would be the same scenario in other states with patrons that feel a closer affiliation to a sporting club in their local area. In some circumstances, people have supported the local suburban team for longer than the AFL competition has been national.

These supporters are however in the minority. You only need to look at crowd numbers, members, sponsors, financials and any other key metric to confirm what position a league like the SANFL is placed in the pecking order.

The AFL is doing what they feel is in the best interests of the AFL. Recent history would suggest what Gillon McLachlan and company get what they desire and worrying about the intrusion of lower leagues perhaps not all that high on the agenda.

It is harsh and you can understand the objection from the WAFL and SANFL in particular. Sometimes you need to know your place in the food chain and the AFL sits comfortably on top. Damage to lower leagues might just be the cost of progress and the reality of football having a national competition.