Cruze Ah-Nau is a rare species in Italy.

The Perth-born former Melbourne Rebels front-rower is one of just a fistful of Australian rugby players currently competing at the top level in Azzuri-land.

Ah-Nau signed with Zebre (The Zebras) in November 2017, and is now in his second year playing for the Parma-based club.

The 28-year-old previously spent five seasons in Super Rugby with the Rebels (2013-17).

The last of these, as many will recall, was the year of the infamous Melbourne Rebels-Western Force saga.

Although his team ended up surviving, the culling of the Force had a large knock-on effect for players like Ah-Nau.

“When the Force got the chop, a lot of players lost their contracts, including myself,” he says.

Ah-Nau left the Victorian capital after the 2017 campaign with his career seemingly in jeopardy.

“I moved back to Perth and was ready to start my new life with my family, then Zebre called,” he recalls.

Ah-Nau linked up with the northern Italian club in November 2017, where he has henceforth been competing in Europe’s five-nation competition, the Pro14.

Zebre are still a relative newcomer to this scene. They are in just their seventh year of existence after replacing Aironi – also from Italy – back in 2012.

Their current roster consists of no less than 20 current and former Italian internationals. Ah-Nau is among a phalanx of foreigners from faraway lands such as New Zealand, South Africa and Tonga that make up the rest of the squad.

The black-and-white-striped side have been perennial strugglers.

Competing against the best clubs from Wales, Ireland, Scotland and lately the Kings and Cheetahs from South Africa has been an uphill battle from day one.

Despite his team’s trials on the field, Ah-Nau is savouring his experiences playing abroad. He claims that the different emphasis for forwards in the Northern Hemisphere has helped him become a more complete player.

“Back home a lot of the focus for the tight forwards is on ball skills,” he says.

“European rugby is much more set-piece-based with a lot more detail into the scrum and line-out, which has helped my game a lot.” 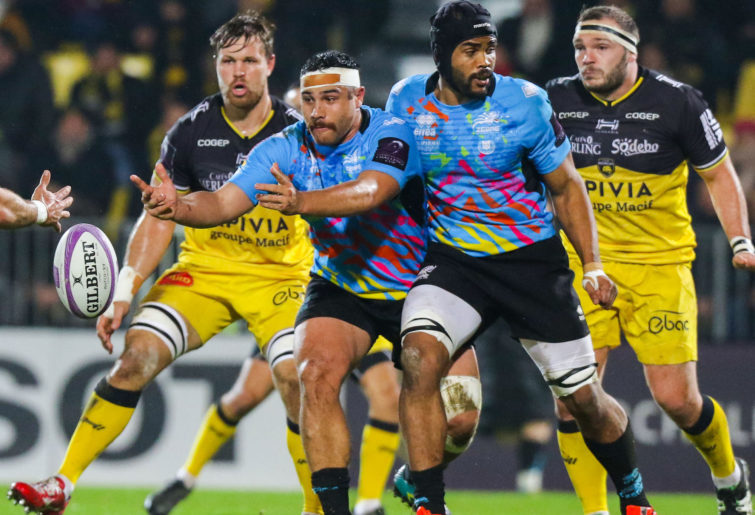 The increased physicality inherent in Northern Hemisphere rugby has resulted in changes to his training regime. Ah-Nau now spends more time building strength in preparation for his brutal exchanges with Europe’s rugby warriors.

“We gym five days a week leading into a game. They expect the front rowers to be a lot bigger and stronger and (to lift) a lot of high weights for bench press (and) squats.”

His experiences competing back home have not been forgotten. Au-Nau’s Aussie-developed kit bag is also proving valuable at Zebre.

“What I like to bring to this club is (to show) that front-rowers can pass the ball and not just hit rucks all the time,” he notes.

“The boys have appreciated that, and it has brought a good shift to our game as a whole.”

Zebre play their home games at the 5000-seat Sergio Lanfranchi Stadium. The field is located just north of central Parma, which is a city of approximately 200,000 inhabitants.

The team’s supporters are apparently willing travellers, but their modest attendance at home games has Ah-Nau bemused.

“The good thing about (Zebre) fans is that there is a specific group that travel with us, especially in the European Challenge Cup. They just don’t seem to come to our home games as much, which is a bit strange, really!” he admits.

Away matches with Zebre have brought Ah-Nau to such places as Pau, Gloucester and the rugby cauldron of La Rochelle.

He has also managed a jaunt or two away during his downtime, including to Rome where he beheld history’s greatest sporting theatre, the Roman Colosseum.

Other highlights of living abroad have been sharing his first white Christmas with wife Sophie and their three young children. The Italian gastronomic delights, of course, have been another pleasing feature.

Parma is home to a couple of world-famous foods: Parmesan cheese and prosciutto, or Parma ham.

Ah-Nau gives both thumbs up to the local offerings, which have not only been bellissimo to his palette, but provided the perfect fuel for a prop forward.

“The food culture is top notch, and definitely one my favourite things here,” he says.

Tagliatelle, tiramisu and Trebbiano will remain on the menu for Ah-Nau until at least the end of this season when his contract expires.

He is not ruling out playing rugby Down Under again, but is hopeful of remaining in Europe where the style of play seems more to his liking.

“It would be great to have an opportunity (in Australia) again, but I’ve left now and I’ll (probably) stay away and finish my career in Europe,” he says.

“I enjoy the rugby here… it’s tiring in a different way. In Super Rugby you’ve got to be much fitter, whereas here it’s more physical.”

Ah-Nau is currently in contract negotiations with Zebre. Let’s hope that this rare and rampaging animal from Western Australia thrives for many years to come on the green rugby pastures of Europe.

And he made it look easy!