Fremantle, and their obliteration of North Melbourne, fits the bill.

This column always – without fail – finds the first column of the football season proper the most difficult to write. There’s only so many ways you can say “Round 1 doesn’t really matter, everyone!” before you find yourself staring at a Wednesday evening deadline and a blank sheet of paper in equal measure.

Guess what? Round 1 doesn’t really matter, everyone! Unfortunately six words isn’t a column. Instead, let’s talk about projection.

The footy media’s reflex reach for the negative has been the dominant theme of the week. There’s something deeply wrong at Essendon, according to Zach Merrett’s inability to apply pressure a couple of times.

St Kilda should win a gold star for ineptitude, according to their decision to allow Dan Hannebery time away from formal club duties to focus on his body (somewhat important for a professional athlete: body. Somewhat less important: job title). Anyone who thought Adelaide would be any good this year should report to the Take Factory for execution. And so on.

Well, if they’re allowed to extrapolate the negativity based on skerriks of material, let’s do the opposite. Friends, I want to talk about Fremantle, and their obliteration of North Melbourne on Sunday evening. 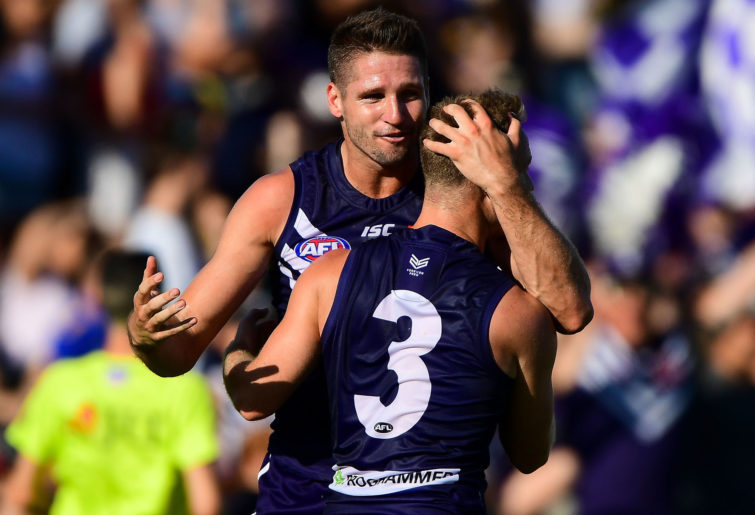 Over the past four seasons, as scoring has ebbed a little lower year on year, 12 teams have scored over 100 points and beaten their Round 1 opponent by more than six goals. Ten of those teams have gone on to play in the finals of their year; five of them played in a grand final, and three of them won the premiership.

The two teams that didn’t make the eight were the 2016 Gold Coast Suns, who got to face the WADA-banned Bombers in Round 1, and last year’s Port Adelaide, who were in the top four until they cratered.

It’s not that simple of course. But in keeping with the theme of extrapolating a single result and drawing grand statements, what if it is?

The Dockers scorched North Melbourne in a way we haven’t seen Fremantle scorch a team under Ross Lyon. His style is more of an 18-hour slow cook, stewing you until you collapse into a pile of mush.

Instead, we are living in a world where a Ross Lyon-coached side booted the highest score of the round, which has happened just ten times in his tenure of 284 games.

What was most striking was the freedom with which the side played. The Dockers eschewed the possession-heavy stylings of many teams in the league, and focussed on territory and speed of movement.

It was enough to overwhelm an underdone and undermanned North Melbourne defence, who couldn’t stand up to the sheer volume of 68 inside 50s and 55 minutes of possession.

The Dockers recorded a kick to handball ratio of 1.54, up from 1.27 last year. Despite that, the team’s turnover rate was broadly the same as the duration of 2018, which may be due to the opposition, but still one normally expects turnover rates to go up in line with kicking.

One metric which was substantially different to last season was North’s tackle rate against the Dockers. Last year, Fremantle absorbed 65.1 tackles per 50 minutes of possession, and against the ‘Roos they took just 54.6. That’s a bi-product of pinging the ball around.

Has Fremantle discovered a new way of doing things? According to captain Nat Fyfe, they have. In post-match remarks, Fyfe – who himself will have earned three votes in what was a clear standout performance by him compared to the other big dogs in the game – said the Dockers had adjusted their style, and “modernised” their game plan.

Nat Fyfe will be one of the big names in the 2019 AFL season. (Photo by Daniel Carson/AFL Media/Getty Images)

The Dockers weren’t the only club who hit that early-season benchmark. The Greater Western Sydney Giants, the forgotten contender – even by this column, who has been as orange and grey as royal blue and yellow at times – put Essendon to the sword.

The Giants looked at their offensive best playing a line up chock full of mid sized players, with the return of Toby Greene straightening them up transitioning from back half to front half, their clear weakness in 2018. While he himself had 14 touches, and just one inside 50, 1.1 and four additional score involvements was a handy return indeed.

Speaking of handy, Stephen Coniglio lived up to his billing as 13th in The Roar AFL Top 50 (where he wasn’t so highly fancied by others) in winning 32 possessions, kicking three goals, laying seven tackles and being responsible for eight inside 50 entries. In an undermanned, as far as the Giants go, midfield he was a standout.

All along the knock on the Giants has been their supposed inability to get down and dirty, and do all the “hard stuff” as those types like to say. That concern has always been overblown, and after their win against the Bombers it’s fair to say that is no longer a concern.

Indeed, the Giants now look about as “normal” as any premiership contender you may wish to compare them to. There’s the right amount of cooks to complement the Michelin-starred chefs.

But wait, there’s more! A third team hit the Round 1 benchmark: the Brisbane Lions. Granted, West Coast was missing four of its six premiership forwards, and plays its football in a way where that is important.

Still, the Lions looked about as good as the optimists thought they would. A big win against the reigning premier (the biggest in AFL history, according to some sharp research via r/AFL) is a significant feather in Chris Fagan and his team’s hat.

Like Fremantle and GWS, the Lions were content to move the ball quickly and gamble a little with possession retention. Brisbane closed down West Coast’s space well, denying the kick-mark game that propelled the Eagles to a premiership. It was impressive; a sign of a side on the up.

In all three cases there are reasons to doubt what we saw on the weekend is a reflection of reality. Fremantle changed their entire business model.

The Giants played a team that looked like it had just come back from its end of season trip. Brisbane hosted a reigning premier with key absentees all in one area of the ground. But even if things aren’t as rosy for them as their Round 1 victories may suggest, recent history is on their side.