It’s not panic stations yet, but the clock is ticking

When Kyle Langford and Matthew Guelfi both bizarrely left the field of play after the former gave away an unnecessary free kick in front of the interchange bench on Saturday, they were simply doing what all Essendon people wanted to do; stop watching the game and run away.

Four putrid quarters against the Giants, so bad that we thought it couldn’t be matched, were arguably bettered (or worsened, depending on how you look at it) in the opening half hour, resulting in a chorus of boos at the quarter-time siren from a loyal supporter base that expects so much more.

Let’s not kid ourselves; this game should have been killed in the first quarter. St Kilda kept Essendon in the game by not taking their opportunities in front of goal, posting 2.7 from a massive 17 inside 50s in the opening term. Michael Hurley, Aaron Francis and co did their best to keep the Bombers in the game, but the weight of numbers was getting the better of them.

And when Francis kicked the ball into the back of an unsuspecting Hurley from short range, completely oblivious to incoming sherrin, fans were left to watch the remaining 57 seconds of the quarter through gaps in their fingers, heads firmly buried in hands.

Despite wanting to play a safe, slow game out of the back half, Essendon was anything but assured with the ball in hand. They took 30 marks to 18 at quarter time, yet St Kilda racked 14 more disposals in the opening quarter, with their ground coverage making it nigh-on impossible to move the ball.

At one stage St Kilda recorded nine consecutive inside 50s as they kept Essendon to a goalless opening term for the second time in two weeks.

As the game continued, it looked like the Bombers were starting to find their groove. Despite finishing the opening term with a differential of -9 inside 50s, the final tally was 54-50 in the Bombers’ favour. They also finished ahead in the clearance battle (+2) and contested possessions (+13) after being -40 in that category in Round 1.

Critical mistakes that were so hard to swallow kept stymieing momentum at such critical times. Orazio Fantasia (0.4) and Shaun McKernan (1.2) were plagued by inaccuracy all day, while despite giving away 19 centimetres and 21 kilograms, Jack Lonie was somehow able to strip Hurley of the football in a significant moment and launch an attack.

That, coupled with Blake Acres’ effort to outmark Zach Merrett, Fantasia and Adam Saad at centre halfback was a neat summary of one team’s ruthless desire against another’s confusion and frazzled mental state.

Meanwhile, minutes later in Essendon’s forward line, David Zaharakis and Andy McGrath spoiled each other’s marking attempt on a moon-ball when trying to keep the ball in attack, as if to hit the nail on the head.

Saad and Francis worked their way into the game very well, and could certainly hold their heads up high as two of the better players in the red and black on Saturday. Dylan Shiel had moments where he looked the classy, All-Australian midfielder we all want to see, and Devon Smith began to assert himself on the contest as they worked away at the deficit.

Ultimately it was the forward entries that killed them. 20 shots on goal resulting in 9.11 from 54 inside 50s is unacceptable. Even after St Kilda’s wasteful opening, they still managed 10.16 from their 50 entries.

They were more efficient, their pressure was excellent, they defended the ground brilliantly and their halfbacks were wonderful in repelling inside 50s.

So Essendon’s 70,000 members are faced with a 0-2 start, and a must-win contest with the also winless Melbourne to begin their dominance of the Friday night timeslot in 2019. Essendon has been a perennial slow starter over the years, but I don’t think too many would have seen this coming. 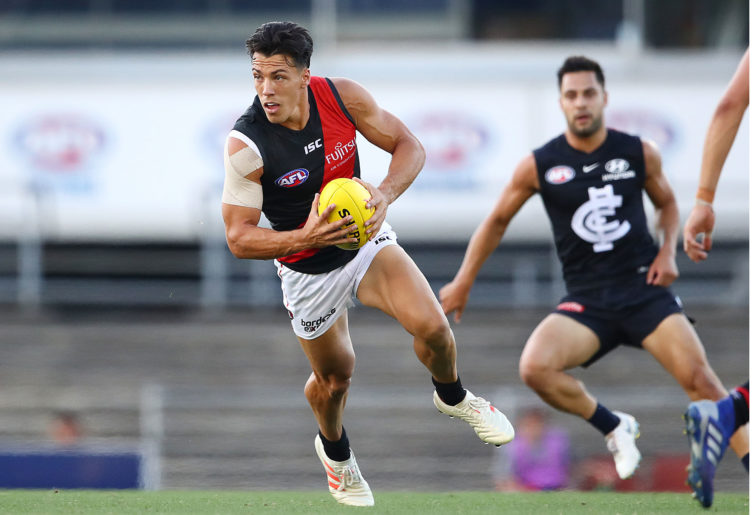 Questions that I would like answered by the Bombers’ brain trust:

Why the desire to play slow?
In Merrett, Saad, Conor McKenna, Fantasia, McGrath and Anthony McDonald-Tipungwuti, Essendon have enough speed to make the opposition nervous on a fast break. So why not maximise the advantage? With Shaun McKernan struggling as the primary target in the absence of Joe Daniher, is there a lack of confidence in the ability to keep the ball in the forward line once it’s there, and therefore not enough time for the defence to prepare for the returning foray?

No doubt the success of the West Coast Eagles playing a kick-mark game is having an influence, with the inevitable game of follow-the-leader from the previous year in full swing. It goes away from what makes Essendon such a dangerous side though, and the game style perfectly suited for the list that Adrian Dodoro and his team have crafted.

Why was the captain squeezed out onto a wing?
Dyson Heppell was stationed on a wing for the majority of the contest. Now, this is a man who, based purely on personal observations, hardly missed a stoppage last season during the 10-4 run to finish the year, to finish inside the top ten in the AFL Coaches Association award voting.

He does his best work in tight, as one of the bigger midfielders in Essendon’s undersized engine room. He looked frustrated at his inability to influence the contest at stoppages, where he excels.

Where was the urgency?
Down by ten points with 13.53 left on the clock in the final term, Josh Bruce puts a shot on goal across the face. Despite the situation, Saad calmly jogs over to the goal square to take the kick-in, giving St Kilda precious extra time to establish their zone.

Later in the quarter, with time becoming more and more critical, Merrett submits his audition for dancing with the stars, elegantly stepping through multiple defenders at half back to find Kyle Langford in the corridor. Despite the game situation, Langford waits, and waits, and waits, allowing the Saints to get extra numbers behind the ball.

Even the skipper was slow to get back to the top of his mark and begin his set-shot approach with two minutes remaining.
Lots have been made of the lack of access to the runners and the ability of the coach to influence the game. But this was entirely on the players.

The lack of awareness was frightening, and it gave the impression that the cue was in the rack way too early.

Collingwood were 0-2 last season before making their season clicked into gear. Ditto the Swans in 2014. Being 0-2 is not the ‘end of days’ scenario that the footy world is making it out to be. John Worsfold is not going to get sacked this week and the list is too talented and aged appropriately to advocate wholesale changes.

With that being said, the time for action is now.