Wow! Who could have seen this coming?

To say that Sydney and Melbourne have struggled during the opening three rounds of the 2019 AFL season is an understatement!

The Swans looked ordinary in their losses against the Bulldogs and Crows before opening their account with a workmanlike 19-point win against the winless Carlton Blues.

However, this was somewhat expected for the Swans given the fact that they lost by 49 points in last year’s elimination final against their cross-town rivals, the GWS Giants.

Arguably their best players, Lance Franklin, Josh Kennedy, and Jarryd McVeigh (the latter who is currently sidelined due to an injury against the Blues last week) are showing signs of ageing and are arguably past their best.

Another possibility is that the Swans have struggled to adjust to the new 6-6-6 rules.

In addition, their disappointing recent record at the SCG suggests that they now have a home ground disadvantage.

So, their struggles during the first three rounds are not exactly unexpected.

And as for the Demons?

After making it to the preliminary final last year, Melbourne was expected to challenge for the flag this year.

I think it’s safe to say no one expected their 0-3 start.

The Demons looked competitive in their losses against Port Adelaide and the Essendon Bombers, at least on the scoreboard, though they were ordinary in their 80 point loss to the Geelong Cats.

Perhaps the combination of a tougher draw, off-season surgeries, the new 6-6-6 rules, out of form players (Tom Macdonald, for instance), and the fact that teams seem to have figured out how to neutralise Max Gawn have all contributed to the loss of form.

However, despite the loss against Essendon, I thought Melbourne showed some good signs given the fact that they scored 112 points through kicking accurately (18.4).

Despite his age, I have a feeling that Jarryd McVeigh’s skill, poise, and leadership be missed tonight.

Also, the fact that Sydney has had a horrendous record at the SCG in recent times could give Melbourne a slight chance of an upset tonight.

In addition, the fact that Melbourne was undefeated at Marvel Stadium last year could give them the confidence to play well against and possibly win tonight as the SCG has similar dimensions.

Call me crazy but I just have a feeling that the Demons will get up tonight.

Regardless of the result, it should be an absolute cracker!

Fingers crossed for the Tigers star. 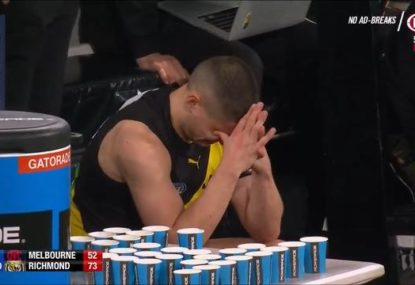 Richmond’s Nathan Broad suffered a nasty dislocated finger against the Demons – not that you’d have known it from looking at him. 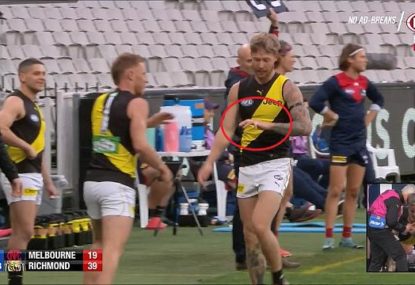