Where will Israel Folau play next?

Now Israel Folau has been told Rugby Australia intend to sack him, what are his options for the future?

Folau is Super Rugby’s all-time top try-scorer and one of the game’s most electrifying runners with ball in hand. The 30-year-old signed a four-year, multi-million dollar extension with Rugby Australia earlier this year and has scored 37 tries in 73 appearances for the Wallabies since switching from AFL to rugby in 2013.

Folau’s unapologetic stance on homosexuality, coupled with public outcry and the denunciation and opposition being voiced by players and coaches around the world, doesn’t paint a very promising picture for his future in the sport. I personally commend Rugby AU for taking a stand against this toxic ideology, and am glad he won’t be playing here anytime soon.

So with Rugby AU shutting the door on him, where could Folau end up? Here are some of the options.

Rugby league
This condemnation of Folau’s remarks extends to the NRL, where Australian Rugby League Commission boss Peter Beattie said, “Israel Folau fails the NRL’s inclusiveness culture, which is a policy strongly supported by the ARLC.”

Any hope of a return to the NRL, where he began his career, is therefore gone.

However, he could eye off a move to England’s Super League, which has been a home to controversial players who couldn’t find a home in the NRL – Ben Barba, Greg Bird, Joel Monaghan and Todd Carney are but a few. 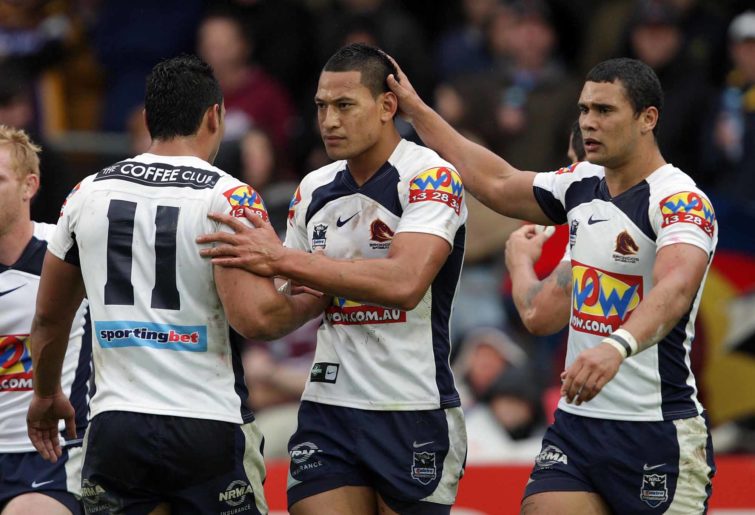 English Premiership
If he wants to stay in rugby union, the England Premiership immediately comes to mind. Unfortunately for Folau, multiple members of the competition have adamantly spoken out against his actions.

Former England prop Joe Marler tagged Folau in a tweet of an image of two men kissing, accompanied by a heart demonstrating a clear stance against bigotry.

“For the good of the game, I hope no English clubs – or any clubs – offer him a contract.

“He’s a world-class full-back with some of his best years ahead of him but, even if he’s available on the cheap, it would send out all the wrong messages. I’d be really angry.”

That said, Folau is an undeniably talented player, and some clubs may be willing to overlook his recent controversies to have him on their squad.

French Top 14
The most viable rugby union option for Folau seems to be in France, where there isn’t as much of a ‘role model’ ideology for professional sportsmen. There’s also a stack of money floating around the French clubs.

But it actually might not be that much of an option for Folau. Even notoriously controversial Toulon owner Mourad Boudjellal has dispelled any rumours of his club picking up Folau, while France also repped rainbow laces and captain arm-bands last year, in support of inclusion and acceptance of the LGBT community.

Japanese Top League
This could potentially be a viable option for Folau. While the Sunwolves’ Michael Leitch has spoken out against Folau, I’ve not seen anyone from the Top League speak out against his actions or take any solid stance on the issue.

He would definitely be a big fish in a smaller pond in this league, but there’s money in the league, and plenty of other Australians have headed to Japan for a payday at the tail-end of their careers.

The rest
I would not rule out Folau heading for Global Rapid Rugby, although it’s probably unlikely. The Andrew Forrest-run league have also stayed silent on the issue thus far and could be willing to get Folau playing for the Western Force in order to boost their profile.

Another left-of-field option could be a Super Rugby franchise outside Australia. We can rule out all five of the New Zealand clubs – plenty of Kiwi players have spoken out against Folau, and they’re not exactly short on talent – but playing for a South African side, or maybe even the Sunwolves, isn’t impossible. Unlikely for sure, but not impossible.

All up, things aren’t looking too good for the fullback. Any side which picks him up will likely receive significant condemnation from around the rugby world. But he is a remarkable talent who will help any side out on the field – if not off it.