The biggest match on the AFL calendar outside of the grand final is nearly upon us, and it brings together two of the game’s most successful clubs in Essendon and Collingwood.

Regardless of where the teams are on the ladder, the annual Anzac Day clash always attracts the largest crowd of the regular season, and expect this to be no different with both the Bombers and Pies in good form entering Round 6 of the 2019 season.

After dropping their first two matches, during which they copped all sorts of criticism from all corners of the media, John Worsfold’s side has hit back in impressive fashion, defeating Melbourne, Brisbane and North Melbourne to vault up to seventh on the ladder.

In his first game for nearly 12 months after being a controversial late inclusion, Joe Daniher made an immediate impact, kicking two goals in the Bombers’ Good Friday demolition of the Roos at Marvel Stadium.

The previous week, Anthony McDonald-Tipungwuti kicked a career-best seven goals as the side put the Brisbane Lions to the sword at the MCG, winning by 47 points, after beating Melbourne by 18 points in Round 3.

Essendon were touted as potential improvers in 2019, and a win over the Pies tomorrow afternoon will go a long way towards silencing the critics, some of whom declared their season on life support after their Round 2 loss to St Kilda.

As for Nathan Buckley’s side, they too have a 3-2 win-loss record, and sit fourth on the ladder thanks to their superior percentage of 125.2 to the Bombers’ 109.5. 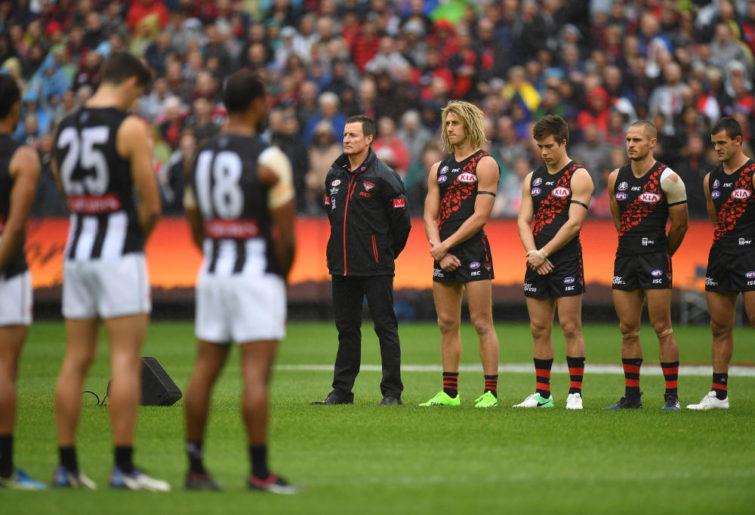 Last Thursday night, they made a mockery of what was supposed to be a tough clash against the Brisbane Lions at the Gabba, romping to an easy 62-point win in front of AFL’s biggest crowd in the Queensland capital since Round 2, 2010.

It was a triumphant return to the ground for Dayne Beams, who spent four fruitless seasons at the Lions before returning to the Holden Centre at the end of last season.

Beforehand, they lost to Geelong in Round 1 and West Coast in Round 3, but were able to beat Richmond in Round 2 and the Western Bulldogs Round 4.

The Pies have dominated the Anzac Day fixture in recent years, winning ten of the last thirteen clashes on this day since 2006, the year the MCG’s capacity was expanded to 100,024.

In that period, the lowest crowd was 84,829 for the 2009 match, which many will remember for David Zaharakis kicking the winning goal for the Bombers at the death in a match played in driving rain.

However, the lowest crowd in the history of this fixture remains 57,294 for the 2004 clash, which was played while the MCG was being redeveloped ahead of the 2006 Commonwealth Games.

This year, it’s hard to predict a winner, although the fact that it’s Essendon’s home game might give them somewhat of an edge.

Meanwhile, Richmond and Melbourne will go head-to-head in the fifth edition of the Anzac Eve match tonight, with a crowd of over 75,000 expected to witness what has become an annual event since 2015.

After Melbourne won the first two editions in 2015 and 2016, the Tigers have hit back to win the last two in succession, and will start favourites to register their fourth victory of the season and continue their rise up the ladder.

And while a loss for the Dees would but another dent in their season, an upset could provide the turning point as they attempt to turn their campaign around after four losses in their first five matches.