Newcastle Jets host Sydney FC on Saturday afternoon, and there will be two very different strategies going into this game.

Sydney FC have already secured their semi-final spot and the Newcastle Jets having no chance of making the finals.

Although they both have nothing to play for, Newcastle will be looking to give their fans something to cheer about after a terrible season.

Meanwhile, Sydney will hope none of their players get injured as they focus on the finals and qualifying for the knockout stages of the Asian Champions League.

Captain Boogaard has yet again been a consistent performer this season, and he is a great asset for Newcastle against Sydney’s attacking prowess.

Vargas most likely won’t return to the starting squad after the club announced their intent to release him in the next transfer window, along with Nick Cowburn, Jair, Daniel Georgievski, Kwabena Appiah and Jake Adelson.

It is sad for the Newcastle fans to see Georgievski go, as he’s been a versatile contributor over a number of positions across two seasons.

Ernie Merrick will probably name a similar squad to the one that thrashed the Brisbane Roar, although Nigel Boogaard should come in for Lachlan Jackson.

Lewis Italiano deserves another go in goals and Angus Thurgate should be retained as defensive midfielder. 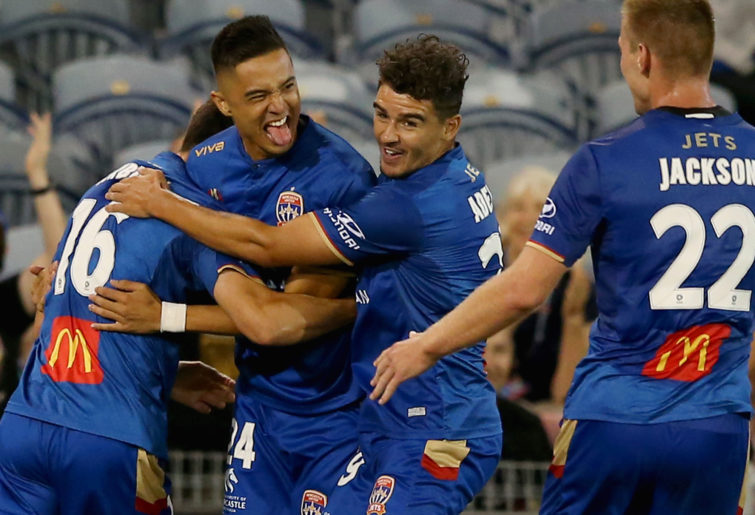 They are giving Siem de Jong and Anthony Caceres a break, making sure everyone is fully fit for the finals.

Alex Brosque and Michael Zullo remain out with a heel problem and a hamstring problem respectively, but they will be ready for the finals.

Milos Ninkovic did not play in their ACL clash mid-week, so he will most likely start.

Jacob Tratt will take the place of Alex Wilkinson to give him a rest, and Joel King could be given his starting debut in place of Paulo Retre.

It is also likely that Cameron Devlin will make his starting debut with Mitch Austin.

I would rather Luke Ivanovic up front, but Austin has to be given a chance before Sydney decide whether to give him a contract, which will give Reza Ghoochannejhad a break.

Prediction
If Sydney decides to put their foot on the gas, they have a great chance to win.

Mitch Austin and Adam Le Fondre will be looking to get in behind the Jets defence, and if they are utilised correctly, they can cause a headache for Ernie Merrick.

But if Newcastle’s front four continue their great form, then it could be a really exciting attacking game.

My prediction is Sydney 2-1.