How Geelong gets robbed by the AFL

On Sunday, Geelong host Essendon at the MCG in the annual Country Game.

And what better way to represent country football than by taking the league’s only regional team and having them host a game away from home at a ground big enough to hold the population of 20 country towns?

It’s a travesty that Geelong are forced to host games away from home.

Essendon last came to Kardinia Park in 1993, the year Dustin Fletcher made his AFL debut. Yes, 1993.

Leading into the 2016 season, the Bombers and Cats were scheduled to play each other twice: the first an Essendon home game at the MCG, the second a Geelong home game at Docklands, Essendon’s home ground.

Leading into that season, 12 Bombers were suspended for their part in the supplements saga, and it became clear Essendon were not going to be a significant crowd-drawing team.

The Round 18 clash drew a crowd of under 30,000. No one in the lead-up suggested it should be moved down the highway.

The following year, people noticed that Richmond had been scheduled to play in Geelong. Hysteria turned to panic as the season went on and the Tigers’ form strengthened, and panic took over: they’re going to lock out 40,000 Richmond fans!

Of course, the game eventually sold out, but people in their rage missed the 1000 tickets that went on sale six weeks before that match.

In fact, they were so enraged, these tickets did not sell out for three weeks.

Richmond CEO Brendan Gale said the Tigers were too big to play in Geelong, just as he had when they played there previously in 2012.

Tension built, and as luck had it, Geelong finished second and Richmond third, and we all know what happened then.

The AFL could have possibly not scheduled that final for a Friday night, to at least give the ‘home’ fans a chance of getting there, but let’s not dwell on that. 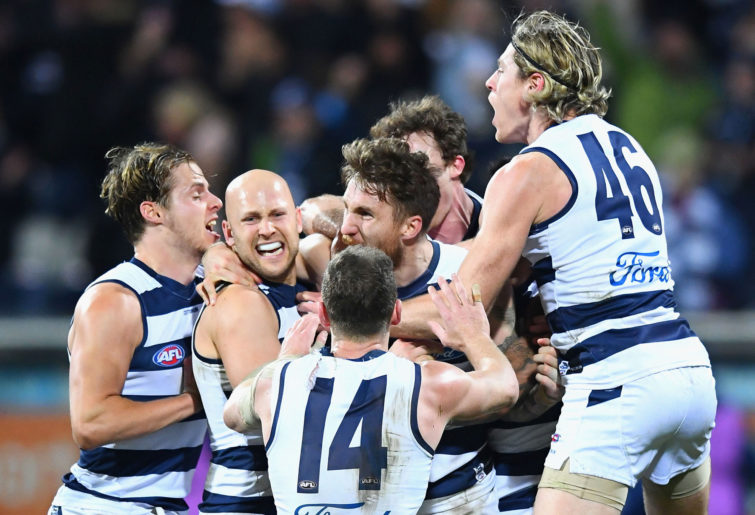 Last year, Carlton came to Kardinia Park for the first time since 1997. The same Carlton who have won five wooden spoons in that time. But of course, it’s all about crowds, or so the story goes.

Carlton – a club that’s supposedly too big for Geelong – met Hawthorn – another also too big for the Cattery – on the weekend in Launceston.

The two also met there in 2016, two years before Carlton returned to Geelong.

No one ever complains about the small capacity in Tasmania. So are we beginning to detect a double standard here?

I can already hear your protestations: the AFL need to promote the game in smaller areas.

Yes, they do. But let’s get some perspective here. Every game Hawthorn host in Launceston, Melbourne host in NT, North host in Hobart, the Western Bulldogs host in Ballarat, or St Kilda host in China gets a smaller crowd than if they played at home.

Every one of those clubs want to host matches at those venues for their own reasons, while Geelong want to play all their games at home.

And while the game needs to be promoted in those areas – with the exception of China – Melbourne doesn’t need extra matches to promote the game. The city already has more than 80 of them.

But Geelong have an unfair advantage at home, you all say.

Well, if any of you have ever watched any sport, you will know every team has an unfair advantage at home. That’s why it’s referred to as home advantage.

My favourite argument is that the ground is narrow. They know how to utilise the unique shape to their advantage, and all of that nonsense.

The more unique your home ground is, the more different away grounds will be, and therefore it’s just as difficult to go away from home as it is for the teams that visit your ground.

Now picture this: you scan the 2020 fixture later this year and notice the Easter Monday game has been scheduled for Kardinia Park.

You ask yourself, ‘How can this happen, Hawthorn are too big aren’t they? This is a high-drawing game, and the Hawks fans will be locked out!’

Then consider why you don’t ask yourself the same thing every time Hawthorn host a game in Launceston.

Then ask yourself why everyone is outraged by the very idea of Geelong playing a final in Geelong – many by the idea of them playing there at all – but no one raised an eyebrow when the AFL said a GWS vs Sydney final would be played at Giants Stadium, but a Geelong vs GWS final would likely be in Melbourne.

If you are one of the vast majority of people who think Geelong should have to move their home games for crowd reasons but never cares about crowds for any other games, consider everything I’ve said.

When your stance can no longer be logically backed up, because it no longer makes sense, but you still think Geelong should not get home games, just accept you have no logical justification for this view.

See you down at the Cattery. Well, some of you.