Four of Round 9’s nine games were decided by a margin of three goals or less.

Only one out of the matches was won by the away team – Sydney defeated North Melbourne in Hobart – but unfortunately the story of the weekend was probably Carlton’s obliteration by Greater Western Sydney.

Top five coaches of Round 9

Demons lost the unlosable game. Despite controlling the balance of play, Melbourne failed to take their opportunities. They had a total of 24 scoring shots to the West Coast’s 20, but they still lost the game. Max Gawn had 56 hit outs, considerably more than any other player on the field. The Demons should have won, but somehow managed to lose despite the Eagles not performing to an adequate level.
Eagles team lifter: Josh Kennedy
Demons team lifter: Max Gawn 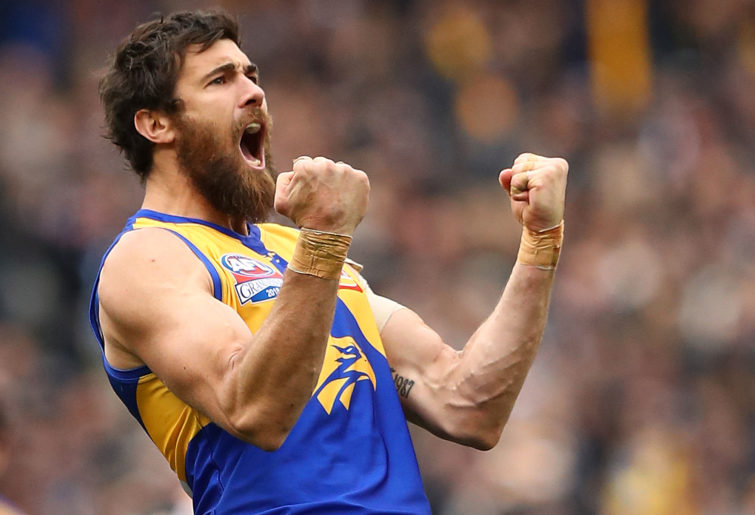 The Saints were competitive for the first three quarters – they had 20 scoring shots to Collingwood’s 15 at three-quarter-time, yet they trailed on the scoreboard. It was a pity that the scoreboard was so one-sided at the end of the game, because St Kilda should have been leading going into the final term, but the Magpies showed their quality in the fourth by running away with the contest.
Magpies team lifter: Brodie Grundy
Saints team lifter: Tim Membrey

The game was a close contest throughout, with the Lions claiming the four points by the narrowest of margins. Lachie Neale showed why he could win the 2019 AFL Brownlow Medal – he was outstanding with 39 possessions for the Lions – while Brad Crouch was most probably the Crows best player, collecting 32 possessions.
Lions team lifter: Lachie Neale
Crows team lifter: Brad Crouch

It was 21 scoring shots apiece at three-quarter-time, illustrating the tight contest. The Bulldogs played some decent footy, but unfortunately they didn’t sustain that level for four quarters and therefore failed to walk away with the four points that were within their grasp for three quarters.
Cats team lifter: Mitch Duncan
Bulldogs team lifter: Mitch Wallis

Only six goals were scored in the first half, with both teams kicking just three goals each. It was one of the more monotonous contests for the neutral spectator, at very least as far as the scoreboard is concerned, but that’s no surprise given Ross Lyon is renowned as a defensive coach. the Dockers have now kicked eight goals or fewer in four of their nine games this season.
Bombers team lifter: Zach Merrett
Dockers team lifter: David Mundy

The Swans won the game even though they scored only three goals in the second half. The second quarter was the most pivotal as far as determining the result, with the Swans kicking seven goals to two.
Kangaroos team lifter: Ben Cunnington
Swans team lifter: Tom Papley

The Hawks kicked just three goals in the first half while the Tigers managed to kick six despite Hawthorn having just one fewer shot on goal in that time. It’s remarkable that the Tigers are playing such good footy despite missing such important players.
Tigers team lifter: Dustin Martin
Hawks team lifter: Luke Breust

A comprehensive victory by the Giants. Jeremy Cameron failed to kick a goal for the second week in a row but still had an impact on the game, with 27 possessions, but it would be pleasing for the Giants that they didn’t rely on him to kick a winning score.
Giants team lifter: Lachie Whitfield
Blues team lifter: Nic Newman

Some me time from Razor? 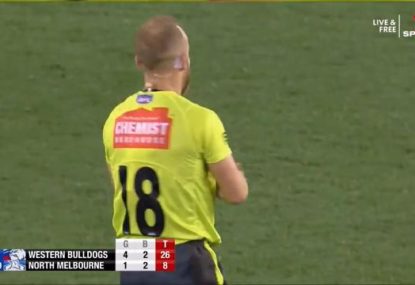 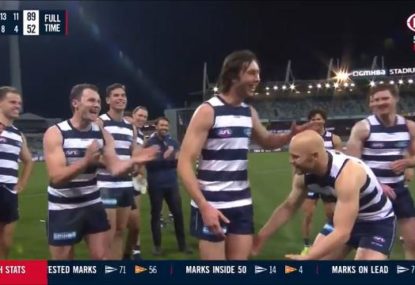 What was Charlie Ballard meant to do? 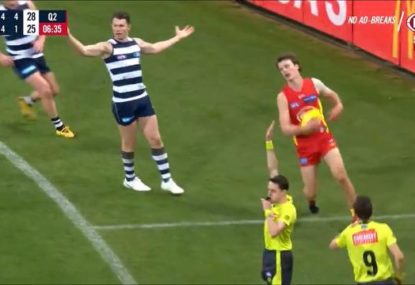 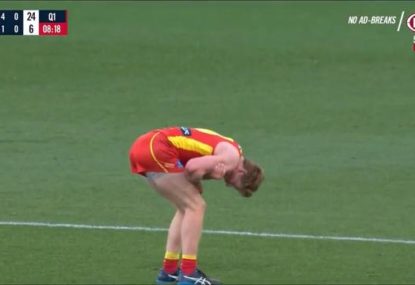 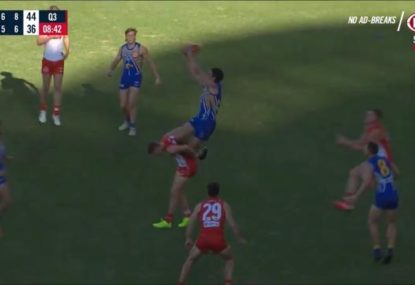