The Crowd
Roar Guru
20th May, 2019
0
Join the conversation
Advertisement
Write for The Roar

Australian-born Anton Minenko is the first and only Australian to ever win a medal (bronze) at Abu Dhabi Professional World Championship 2019 at the Adult Black Belt level.

If this is not a big enough achievement, Anton accomplished this only five months after a knee reconstruction.

“I am proud and humbled by the whole event. My doctors said I would need at least 9 -12 months of recovery before I could even start light training. He also said that would need to consider the serious likelihood my top-level competition days may be over”. Anton explained

The Abu Dhabi World Pro is one of the most prestigious Jiu Jitsu competitions in the world. Bringing the best athletes together from more than 140 different countries.

Athletes must earn their place by competing in a year of qualifying competitions held all over the world. Events are fully televised and with the main tournament holding the biggest prizes money in Jiu Jitsu. These spots are highly contented.

Before his injury, Anton competed in several tournaments in Australia but had travelled to Japan, Thailand and Brazil to ensure he earned enough points to finish in the top two of his country. Anton’s hard work paid off and he earned his all-expenses paid trip to Abu Dhabi and the honour of representing his country. 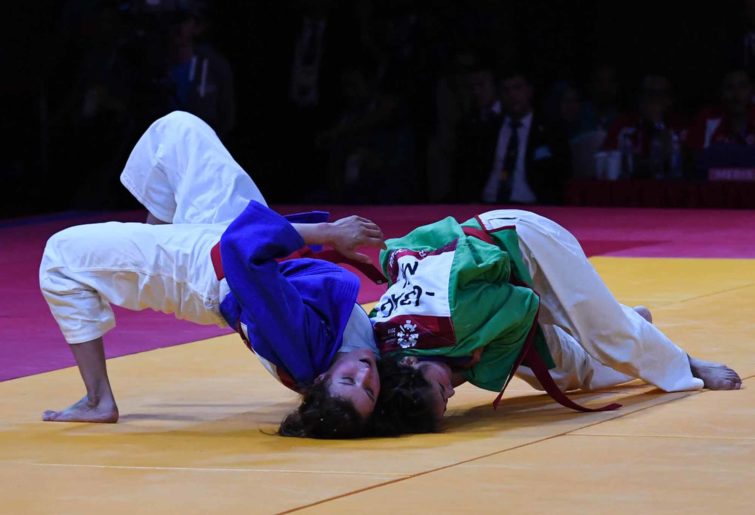 Jiu Jitsu is growing in popularity around the world. (Photo by Anton Raharjo/NurPhoto via Getty Images)

“The qualifiers can be brutal. Some competitors will travel half way around the world to compete trying to earn their spot in the main tournament. These are not your average Saturday morning Jiu Jitsu tournaments in the local school hall. This is a business, there is a lot at stake and competitors take it very seriously.”

Anton is no stranger to competing in Abu Dhabi. In 2018 he was the Australian Champion in the qualifier rounds and took the number 1 ranking in Oceania and finally Bronze in the 110kg Adult Brown Belt division.

Anton now competes in the 94kg Adult Black Belt division. Arguably one of the most disputed divisions of the tournament. On his way to earning third place Anton faced (4) opponents submitting several including Haisam Rida (GHA) and most notable Erberth dos Santos in a somewhat controversial match.

Erberth is a World, European, Brazilian and Pan American Champion just to name a few of his accomplishments.

“People keep asking about what happened (regarding Erberth dos Santos) as I explained to in my interview with Flograppling, he just gave up. No controversy, no pee”.

Anton is based in Brisbane Queensland. He trains and teaches out of Garra Brazilian Jiu Jitsu Academy in Kelvin Grove.

“In my eyes as a coach, Anton always had that something special. His capacity to learn and evolve his game in short periods of time is unique and is matched by his relentless dedication. This win proved that with determination, hard work anything is possible. Anton’s achievement is another step towards showing the Australian Brazilian Jiu Jitsu scene is legitimate and hold its own in any arena”! Eduardo Dias said (Anton’s Coach and Head Instructor of Garra Brazilian Jiu Jitsu)