Khawaja at risk of being axed for World Cup opener

The make-up of Australia’s starting XI for the World Cup remains unclear as they head into their final warm-up match today against Sri Lanka.

Meanwhile, neither Coulter-Nile nor Behrendorff has made a commanding case for selection as the third pace bowler to complement Pat Cummins and Mitchell Starc. Cummins has been in dominant form with the new ball this year, taking 17 wickets at 11 in the five ODIs he has opened, all of which were on lifeless pitches in Asia.

Australia surely, then, will hand him the new ball in the World Cup given the enormous importance of taking early wickets. 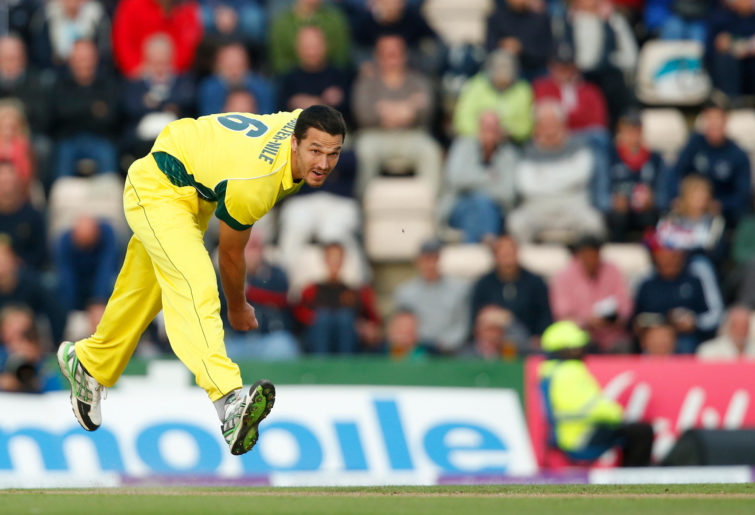 Starc too seems like an obvious choice to open the bowling. The left-armer’s phenomenal record with the new ball in ODIs, his ability to swing the white ball and his knack for taking wickets in the first ten overs cannot be ignored.

That complicates matters because Australia clearly see Behrendorff as a specialist new-ball bowler. The Sandgroper has opened the bowling in all ten one-day matches he has played for Australia, including six ODIs and four practice matches this month.

Like Starc he has the skill to consistently swing the new white ball and has a capacity for taking big wickets in the first powerplay. But it is hard to see how Behrendorff could be handed the new ball ahead of star pair Starc and Cummins.

The selectors, then, will need to consider whether Behrendorff could adapt to an unfamiliar position as a first-change bowler in the World Cup.

This is a role Coulter-Nile knows well, having rarely opened for Australia in his 27 ODIs. The right-armer could have the edge over Behrendorff in the eyes of the selectors due to his familiarity with bowling first change, his greater international experience and his superior batting and fielding ability.

But Coulter-Nile did himself no favours by being hammered for 61 runs from six overs against England while Behrendorff was very impressive in the same match. It will be interesting to see if Australia play both of them against Sri Lanka today to offer them one last chance to press their cases.

The make-up of Australia’s top six today may also hint at how they intend to line up in the World Cup opener. One of Stoinis, Marsh or Khawaja will have to be omitted against Afghanistan. Stoinis has the advantage of offering a handy extra option with the ball. But the all-rounder’s batting touch has been dire for well over a year now, having averaged just 25 across his past 20 ODIs.

Stoinis’s form has been no better in the practice matches, in which he has made just 43 runs at 14. What’s more is that he has scored at a gentle strike rate of just 76 across those matches to go with a very slow strike rate of 82 in his past 20 ODIs.

Stoinis is tasked with being a swift scorer batting at No. 5, but instead he chews up a lot of balls as he tries to get set at the crease, which is unacceptable for a No. 5 batsman in modern ODIs. Yesterday, as Australia beat England, it was Khawaja who was in this fifth position, with Warner shifting up to open. That was a strange move considering Khawaja has made 665 runs at 66 as an opener in ODIs this year, including two tons.

It may suggest Khawaja is in danger of being axed for the World Cup opener to allow Warner to open and Stoinis to retain his middle-order spot. While Khawaja has a sensational record as an opener in ODIs, he has averaged just 24 in his ten matches batting elsewhere in the order.

A perceived lack of versatility could count against the left-hander if it comes down to a choice between him and Marsh. The West Australian, by comparison, has flourished all over the ODI batting order. Marsh averages 39 as an opener, 45 at first drop, 48 batting at No. 4 and 43 in the six matches in which he has batted at five, six or seven.

Combined with his excellent ODI record in England – an average of 46 and two tons from nine matches – Marsh may just edge out Khawaja for the final World Cup batting spot.