The New South Wales Blues were outclassed in a come-from-behind victory for the Queensland Maroons during State of Origin 1 in Brisbane. After going into halftime 8-0 up, the Blues capitulated in the second half to lose 18-14.

Which players flopped, and which were the stars? Here are my player ratings from the opener.

1. James Tedesco – 9/10
A typical Origin performance from Tedesco. He hasn’t turned in a bad game in Sky Blue yet, and must be just about first picked in this side.

He made one bad error in the second half, but apart from that, didn’t have a blemish on the record and was the Blues best by a distance, finishing with 267 metres from 30 involvements. 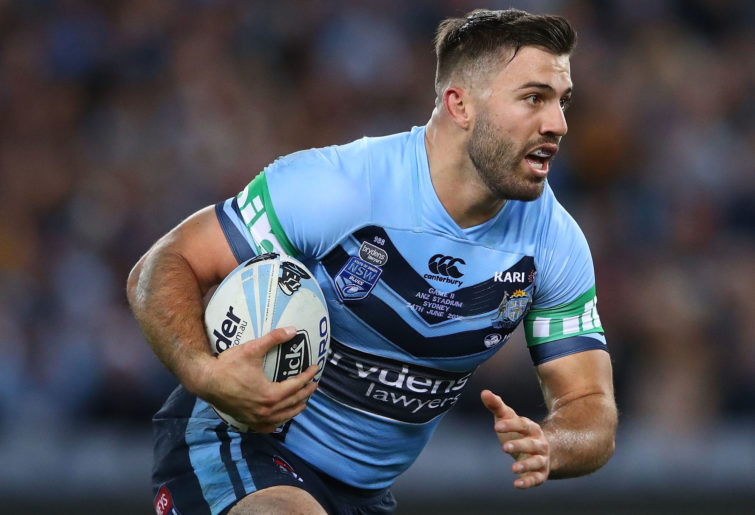 James Tedesco of the Blues. (Photo by Cameron Spencer/Getty Images)

2. Nick Cotric – 6
Cotric had a solid Origin debut. His areas of strength were undoubtedly under the high ball and running the ball out of trouble for the Blues, particularly during the second half when they faced wall after wall of pressure.

He’ll be back, finishing with 114 metres and six tackle breaks, never really letting the Maroons get on top of him, although some of the defensive work on the ground is cause for concern.

3. Latrell Mitchell – 3.5
You just about get a cold shiver up the spine thinking about Mitchell’s performance. He wasn’t the worst player on the field, but he certainly wasn’t far away.

His sin bin just about summed it up. Sure, it probably saved a certain try, but the Maroons were able to create plenty of pressure while he was off the field and reinforce their dominance over which part of the ground the contest was being played in.

When he was on, Mitchell just didn’t go looking for work, and while his defensive statistics don’t make for terrible reading, his positioning and decision making at times made for putrid watching.

4. Josh Morris – 6.5
Morris was an eyebrow-raising selection, but answered the call brilliantly.

Scored the opening try of the game and was just all around solid, as we have come to expect from Morris over the years. 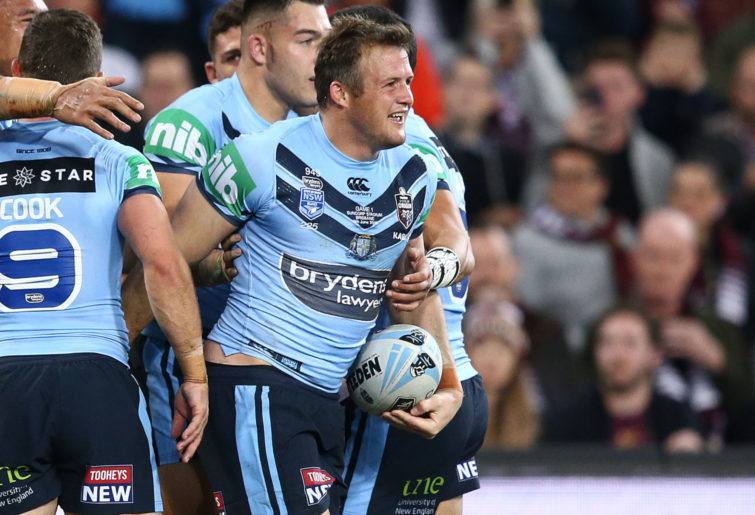 Josh Morris of the Blues (Photo by Jono Searle/Getty Images)

5. Josh Addo-Carr – 6
Addo-Carr has the speed and flare to scare any defensive line, but unfortunately, we didn’t get to see a great deal of that last night.

He did make 142 metres from 13 carries, but unfortunately, a lot of that was bringing the ball out of trouble, which, like Cotric, he did pretty well.

Hopefully he gets more space to operate in Game 2.

6. Cody Walker – 3
A rough, rough Origin debut for Walker, who was hooked by coach Fittler in the second half.

He just never found his groove. Didn’t carry out the ball running job he was supposed to, nor was he able to help Nathan Cleary all that much with the kicking game or organisation.

He’ll get another chance because he is that good, but four missed tackles won’t go over well either.

7. Nathan Cleary – 5
In a nutshell, picking a majorly out-of-form Cleary was a mistake for the Blues. It’s hardly his fault he was given selections, but I’d like to think the result might have been different if Luke Keary didn’t pick up yet another concussion last week.

Cleary was serviceable in his long-range kicking game, but didn’t take the line on and seemed to lose all control over the Blues attacking structure in the second half as they fell apart trying to hang with the Queensland side.

It wasn’t a terrible performance, far from it. But it just wasn’t good enough to be considered one which alleviated blame off him for the loss.

8. David Klemmer – 8
The way Brad Fittler managed the interchange for New South Wales last night was an absolute travesty. Almost reminded me of Paul McGregor at the Dragons, and that’s not a class of coaching you want to be in.

Klemmer was just immense during the first half, and probably at one point was on track for best on ground honours.

Every time he touched the ball during the first half, he commanded attention from multiple defenders and more often than not found a way to get back to his feet quickly.

But then, he played just 11 minutes in the second half, and with him and Tyson Frizell among others on the bench for far too long, it’s hardly a surprise a group of rookies off the bench weren’t able to hold off the juggernaut at home.

9. Damien Cook – 8.5
Cook hasn’t let anyone down at Origin level yet. Thought he was almost the best for the Blues.

Incredibly, he ran the ball 14 times for 132 metres and came up with 45. Unfortunately, he missed another eight, but that’s the only knock you could put on an otherwise stellar performance for the Blues hooker.

He was dangerous with the footy, burnt tired marker defence at times, and was a key part of the reason the Blues were able to have any chance in the last couple of minutes.

10. Paul Vaughan – 7
Like his front row partner, Vaughan was solid in starting the game for the Blues, but like the rest of the pack, found himself on a poorly managed bench and was off the ground at pivotal times. 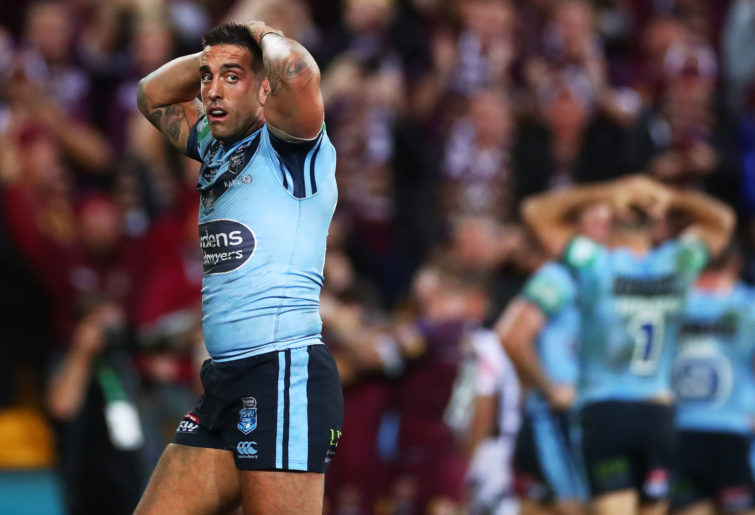 Paul Vaughan of the Blues (Photo by Cameron Spencer/Getty Images)

Still, in 42 minutes, he made 28 tackles very efficiently, and like he has for the Dragons all year, ripped in as he cracked a century of metres across his 12 runs.

11. Boyd Cordner – 6.5
A captain’s knock from Cordner. He was better than solid throughout the 80 minutes (of which he played 71), but was certainly not unbelievable.

Took some good hard runs at trying times out of the own end, but will be pretty disappointed in his sides second half as he came up with 91 metres and 34 tackles, although six missed is an issue.

12. Tyson Frizell – 6
Frizell’s first stint was very solid and in fact, he was probably among the Blues best forwards during the open half an hour with some good, solid runs.

Unfortunately, that’s just about where it he ended. He only played 40 minutes and while his impact was good, you just can’t bump up a bloke who made 92 metres and wasn’t given the opportunity to play much during the second half.

However, based on his first half, I tend to think he might have been able to reverse the momentum a little bit when Queensland had all the running.

13. Jake Trbojevic – 7
Jee, Jake Trbojevic is just about the most reliable performer in the NRL, and the perfect option to start at lock for New South Wales.

He might one day come under threat from Cameron Murray, but for now, he has this position locked and sealed with his name on it every year.

Just a solid performance, and while he wasn’t a star, he didn’t need to be to do his job. Ended up with more than 130 metres and was dangerous with the footy.

14. Jack Wighton – 4
I don’t like doing this to Wighton, but I’d say he is going to be very lucky to receive a call-up when the Game 2 teams for the trip across the country are announced.

It’s not that Wighton was bad. He made one mistake – unfortunately, one which put the Blues well and truly behind and will be remembered – but otherwise, was solid.

His ball running was strong, and when Cody Walker got hooked, he was the right option to bring on. It’s just unfortunate that he didn’t have more of a chance.

15. Payne Haas – 5.5
Haas had 31 tackles without a miss and nine runs in what was a pretty solid Origin debut for a young guy who was just supposed to make an impact.

He did more than that though, ending up playing 40 minutes, which it has to be asked whether the time was more than it was supposed to be.

Still, he had some good charges and will belong at this level into the future, although, there was one dumb penalty he gave away which hurt New South Wales.

16. Cameron Murray – 7
Murray is probably going to captain the Blues one day. I don’t think there is too much doubt about that at this point, and he answered all the critics who thought he should have been behind Victor Radley in the pecking order last night.

In 51 minutes from the bench, he came up with 112 metres from 14 runs and tackled like his life depends on it – as he always does at club level.

But it was the speed and quickness of play the ball which made the biggest impact to the Blues and their playing style.

Murray took to Origin like a duck to water and isn’t going anywhere from this team for the rest of the series. Just a brilliant presence off the pine.

17. Angus Crichton 4.5
Crichton was one of the big breakout stars last year, and was solid in Origin, but he was just about a no name last night. 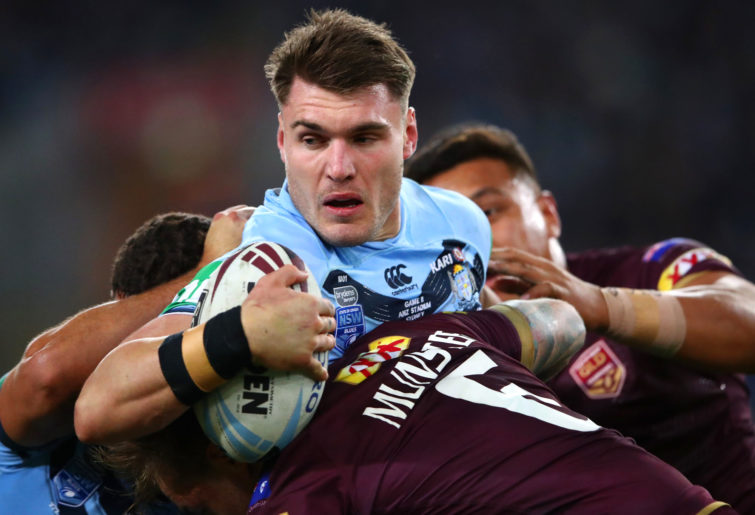 Didn’t go looking for the ball, and didn’t try to get involved in what was a long stint on the field.

He played 52 minutes, but had just eight runs for 55 metres, and while his defence was solid, he failed to do the job that he needed to do for the Blues, even without the ball.