Numbers game: Which teams will rise and fall in the second half of 2019?

The top eight looks mighty settled through 11 rounds of the 2019 season, but there’s still plenty of room for teams to rise and fall in the second half of the year.

2019 has gone extremely quickly. The season is half way finished, and while things appear sorted up top the bottom half of the eight could change markedly in the next three months. Still, if we got to the last week of August and the ladder looked like it does now one wouldn’t be surprised.

The context of this year’s half season numbers game is a little different than last. This time last year we were talking about how even the season was, and how unpredictable the eventual battle for the flag would be.

So it was, with only two teams sitting in the top four at this point retaining their places, and two teams jumping from outside of the eight into finals, come the end of the year.

In 2019, you would be braver than I to predict a material change to any tranche on the ladder. The top three of Geelong, GWS and Collingwood look a level above the rest of the finalists, while the likes of West Coast, Richmond and Brisbane are another level above the teams below them.

Then it’s really a raffle between Port Adelaide, Adelaide and Fremantle for the last two spots, with the five games the trio play among themselves critical to working out who plays finals.

From there teams are injured, struggling or playing for 2020 and beyond. The team that finishes tenth this season will not feel like it has missed an opportunity to play September football.

But I digress. This is the 2019 ‘Half Year Numbers Game’, where we take a look at five purely quantitative indicators and work out which teams could be expected to have a better second half than their first half. Or vice versa. If you don’t know what some of these numbers mean by now I’m sorry, I can’t help you.

Pythagorean wins
The original and the best, Pythagorean wins look at a team’s underlying scoring patterns and allocate shares of wins based on how that looks against the rest of the competition. Winning more than your Pythagorean tally? You’re performing ahead of the maths.

The first half of the year has thrown up two absolutely fascinating Pythagorean outcomes for two finals/finals-adjacent teams. 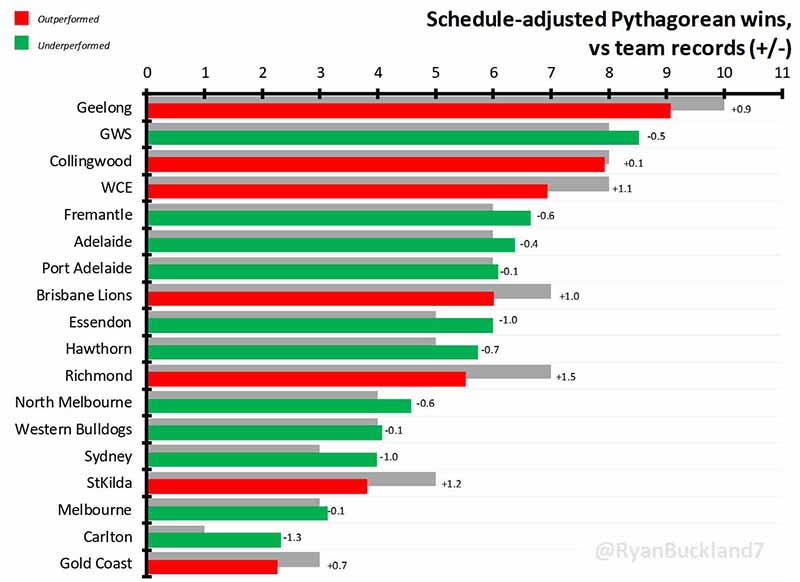 First things first: the top three are as far above the teams fourth and below as I can remember seeing in this column. Geelong is the clear number one, with a Pythagorean total of 9.1 wins. GWS is second, with 8.5 Pythagorean wins. Collingwood is third, with 7.9 wins. The trio is a clear win above West Coast in fourth place.

Geelong is outperforming the maths, but only for mathematical reasons. The further a team is away from the hypothetical average 5.5 Pythagorean wins, the more underlying points it needs to collect wins.

By contrast, GWS are slightly underperforming its Pythagorean total (by half a win), while the Pies are performing more or less in line with expectations (+0.1).

There are plenty of teams with significant (more than one win) differences in their Pythagorean totals, which is generally a good indicator that there will be some progression or regression in the second half of the season. 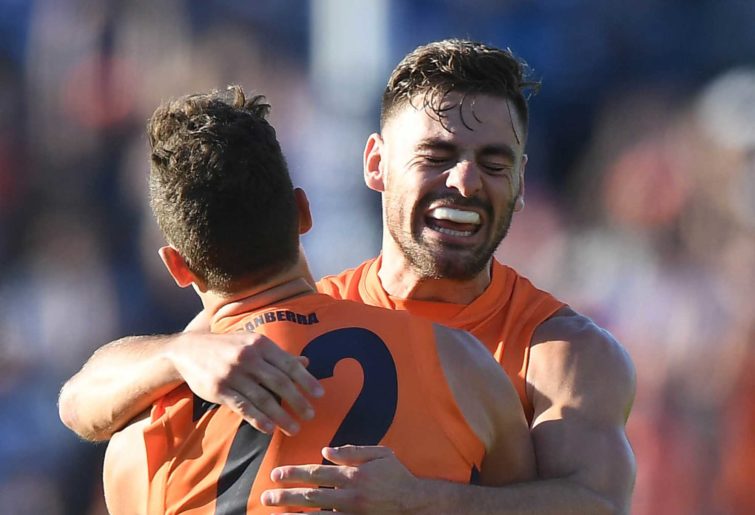 Chief among them is Richmond, which the formula suggests has been a more or less average team through 11 games (5.5 Pythagorean wins). That they’ve pieced together seven wins in the face of a significant rash of injuries sets them up well; equally it suggests that if the Tigers play like they have in the first half of the year we may expect them to fall away a touch.

Other teams who have outperformed include St Kilda (+1.2), West Coast (+1.1), and Brisbane (+1.0). Two of those teams find themselves in the eight despite patchy form, the other played its early season fixture well but in reality wasn’t a finals contender coming into the year.

Close games
If you feel like there has been an inordinate number of close finishes in the AFL this year, you would be right.

So far there has been 24 games decided by 12 points or less through 99 games, meaning more or less one in four games has seen a tight finish. That’s up from 18 this time last year.

More than anything I’d speculate it is down to the continued decline in scoring across the league. Less points scored will naturally bring margins closer. But it also means close game luck plays should play a more important role in teasing out underlying performance.

However, this is not the case. The distribution of close wins across the league has been broadly random, as you would suggest, with only St Kilda benefiting by one win (three wins from four close games), and only Adelaide, Carlton and Essendon’s records being negatively impacted (1-3 for the Crows and Dons, 0-2 for the Blues).

In the case of the Saints, this close game performance explains away their Pythagorean win situation. That’s about it. Every other team is within half a win of their expected performance in close games, despite there being a whole heap of close games. Numbers, eh. 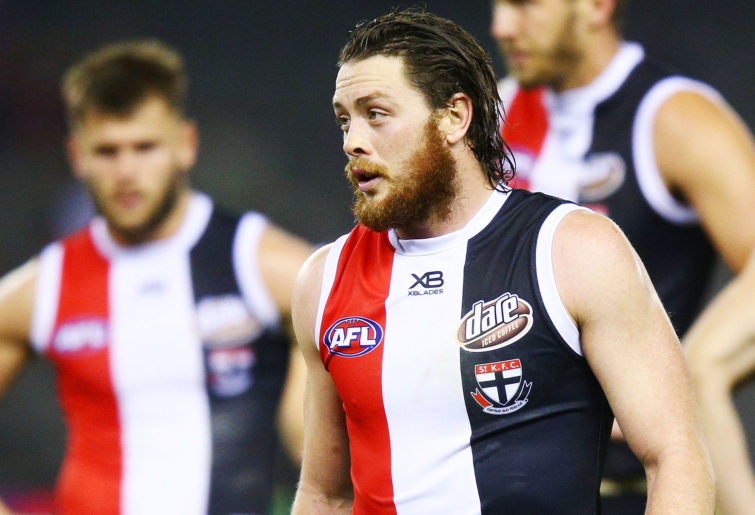 Jack Steven of the Saints. (Photo by Michael Dodge/Getty Images)

Blowouts
Despite the increase in close games, there hasn’t been much change in the volume of blow out games (a game with a margin equal to the average plus one standard deviation). What’s interesting here is the figure that constitutes a blow out has collapsed between 2018 and 2019.

Just one team has recorded more than two blow out wins in their first 11 games: the GWS Giants. Their victories against Carlton (+93), Gold Coast (+83) and Essendon (+72) are the signs of a strong team; history shows the very best teams lay waste to their opponents when given the chance. The Giants have been blown out once, meaning they’re two up on the ledger.

The Cats have recorded two blow out wins, and are yet to be blown out themselves, meaning they also sit two up on the blow out ladder. No other team sits at the end of Round 11 with a similar differential.

Meanwhile, two teams sit with a negative two differential: Carlton and Gold Coast. Both have been blown out twice, and haven’t blown out an opponent so far in 2019. History suggests things are unlikely to get better for them in the second half of the season.

Fixture change
So long as the AFL has an unbalanced fixture there will be winners and losers based on who plays who. So far this season, I estimate the fixture has conspired to shift aRound 4 wins from some teams to other teams – a relatively modest amount but an impact nonetheless.

To date, Port Adelaide has been the biggest beneficiary, with their fixture worth around an extra 52 points on a hypothetical perfectly even fixture. Other significant beneficiaries include GWS (48 points) and the Adelaide Crows (23 points).

At the other end of the spectrum sits the West Coast Eagles (34 point penalty), Melbourne (33 points), Sydney (30 points) and Gold Coast Suns (26 points).

Those are 11 game totals; the impact on a game to game basis isn’t enormous, but in a competition where there are more and more close games every point counts.

What we’re interested in here though is how each team’s fixture is set to change in the second half of the year. On that front, there’s a handful of beneficiaries: West Coast, St Kilda, Melbourne, Fremantle and Collingwood all figure to have a less challenging fixture in the second half than they did in the first half. 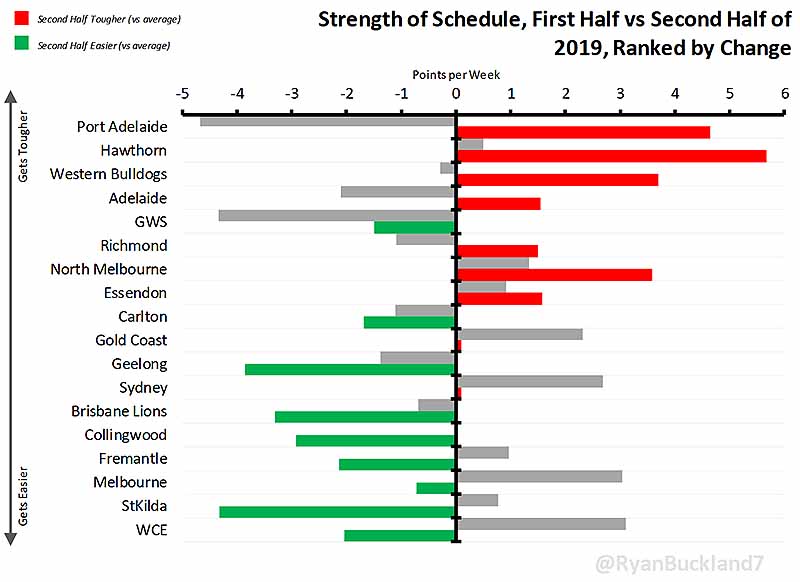 By contrast, Port Adelaide’s script is set to flip significantly, with a 102-point aggregate swing in their fixture difficulty in the second half of the year. Other teams who’ll face more challenging fixtures include Hawthorn, the Western Bulldogs, Adelaide and GWS.

Key Performance Indicators
The final aspect of the half year Numbers Game is a brief look at three critical statistical categories I track closely throughout the year. They are:

Territory: Inside 50 differential. You can only score if the ball is at your end.

Possession: Time of possession differential. You can only score goals if you have the ball in your possession.

The three tend to be uncorrelated, but individually are quite useful indicators of success. Given this, success in two or three of these metrics has historically been a sign that overall success is not far away. In this case, we seek teams that rank in the top six on each individual metric, and look more favourably upon those.

Another fun fact: West Coast, who sit fourth on the ladder, rank 16th in ball-winning, 15th in territory and tenth in possession. Last year they didn’t set the world on fire on any of the metrics, but still ranked 14th, fifth and 12th in 2018.

Here’s what the rest of the league looks like.

All told, the Numbers Game does very little to sway me from my prior views on the season. We have a clear top three, a clear middle three, and some teams in the box seat to make up the numbers inside the final eight.

Will that hold? We’ve got 11 weeks to go until we find out for sure.