The Eagles are a false flag contender

It’s not often you can draw a line through a top four team at the half way point of the season. But here we are, with the West Coast Eagles in 2019.

Before we get to the guts of today’s column, I just wanted to let readers know this will be my second-to-last regular column for The Roar. It is ending for overwhelmingly good reasons: a growing family and growth in my professional life have made it hard to write to the level I want – and you all demand – and so I do not want to keep tapping the keyboard just because I have the chance.

My intent is to contribute pieces on a more ad-hoc basis going forward; as far as weekly coverage goes – this is it.

I wanted to say it this week so as to leave next week’s grand finale completely clear to make the point I want to make. So in advance of that: thank you everyone for reading, it’s been a lot of fun, and I will still be around the place every now and again.

Anyway, the Eagles. The Eagles kind of suck this year hey? Which is an unusual thing to say about a team that sits a game clear of fifth spot with ten games to go.

Indeed, there’s a pretty strong chance West Coast end up in the top four by virtue of their fixture and their strong home ground advantage.

Andrew Gaff of the Eagles (Photo by Paul Kane/Getty Images)

But they aren’t winning the flag, because there is a fatal flaw in their game which will prevent it. Unless, of course, they address it over the next ten weeks leading into September.

That flaw is the Uncontested Mark, or UCM. Specifically, it is West Coast’s reliance on the UCM as a mode of attack, and for its ability to set up its defence.

So far in 2019, West Coast is one of the teams that leans on the UCM more than any other. Through 12 games, the Eagles average 90.8 uncontested marks per game, third behind Collingwood (93.1) and the GWS Giants (101.0). The AFL average is 80.6, and the majority of teams (ten of them in fact) sit within one or two UCMs of that average.

What’s interesting about this for the Eagles however is how their UCM outcomes map to their wins and losses. So far in 2019, West Coast has taken an average of 100.8 UCMs in its wins, and just 71.0 in its losses.

The gap of +29.8 in wins versus losses is the largest such gap in the league. Further, West Coast’s UCM differential in wins is +18.1, and in losses is -23.8. The differential in its differential – second last column guys, you don’t have to be subjected to this for much longer! – is 41.9, the third highest in the league behind GWS (who’ve been belted twice) and Geelong (whose one loss came to the UCM-happy GWS Giants).

It is incredibly arbitrary but at the same time it is instructive: when West Coast have taken 100 or more uncontested marks in a game this year, it is 5-0. When they have taken less, it is 3-4. It seems that if you take the UCM off the Eagles, you limit their ability to win games of football.

Sydney was the latest team to halt the Eagles kick-mark game, and ride that strategy to a victory. The Swans held the Eagles to 79 UCMs, a figure which would have been even lower if not for a burst of around 15 in the final stage of the last quarter (I was checking the stat in line and I noted the Eagles were sitting on around 60 total marks at three quarter time).

West Coast had a number of key structural players unavailable, including Modern Half Back King Shannon Hurn (who is inside the top ten for UCMs per game, along with Jeremy McGovern and Brad Sheppard), but that goes part of the way to explaining it.

The Swans were able to do what plenty of teams have done to the Eagles this year: play frenetic or play extremely slow. There weren’t a heap of long balls kicked in hope to a congested Eagles’ defensive 50 – a huge achievement for the Swans given that has been John Longmire’s game plan for a couple of years now.

There was amps of pressure applied to the Eagles as they attempted to exit their defensive half of the ground.

It’s an increasingly obvious blueprint to beat the Eagles. And to be frank it isn’t that hard to implement. Any team worth its salt will give it a go in the final ten games of the year.

Meanwhile, there’s a bit of signal in those three wins with less than 100 UCMs. Those wins came against Collingwood, St Kilda and Adelaide, and were also three of the Eagles’ five best performances winning the ball in tight.

It was the approach West Coast took to winning its way through to last year’s grand final. A maligned midfield got to work, got their collective hands dirty, and gave the coaches box something else to work with when Plan A failed. So far it has largely deserted them in 2019.

Coach Adam Simpson has talked about the side as “just going” so far this season. As it stands, the gulf between the Eagles in fourth and Geelong in first feels insurmountable.

If the finals started this week the Cats would jump a significant favourite over the Eagles despite the latter’s better recent performances at the MCG and Geelong’s historic struggles. 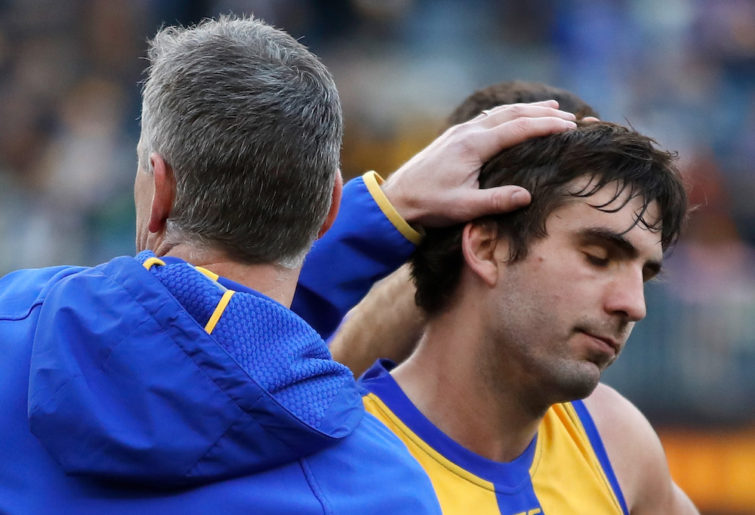 But that isn’t the case. West Coast has ten weeks of football to turn around its struggle to cope with teams who take their marking game away from them.

The Return of the Nat – Nic Naitanui – will shore up the club’s ball-winning and stoppage units instantaneously. Particularly given Naitanui’s recommencement has been delayed to ensure he can return at something approaching peak fitness (as far as mid-season fitness goes). We all forget just how strong a groundball player Nic Nat can be.

Nic Naitanui of the Eagles (Photo by Michael Dodge/Getty Images)

Andrew Gaff has gone from a net negative to a net positive over the past six weeks, providing some more intent with the ball in hand. Ditto Elliot Yeo, who has gone back to his roots as a tackling machine in an effort to kick start his year. Jack Redden can’t sink too much lower form wise; we know from his end to 2018 that he is at the very least a serviceable AFL player.

West Coast will have most of its first choice defensive set available after the bye, given Tom Barrass looks likely to return. Hurn’s issue is by all reports relatively minor and should resolve before Round 13. Something approaching normality will return in the back half, which is critical given how the Eagles want to play.

The forward line is much more of a live concern, and there aren’t many compelling solutions on the list. Josh Kennedy is showing his age – as is to be expected – and Jack Darling’s planet-destroying first 10 rounds of 2018 feel like they never happened.

Jamie Cripps is in career best form, which surely cannot hold. Willie Rioli’s importance as the glue guy was underrated by all – including me – coming into the year. Liam Ryan can’t shoulder much more load given how he likes to play.

While the Eagles’ forward challenges are likely to persist, the club is scoring at an above average clip per inside 50. Their rate of inside 50s per game – another Simpson sore point – is just 48.2 per game, which is the fourth worst mark in the league.

Just lifting that to league average would see the Eagles score an extra eight points per game, before we consider what that might mean for their rate of territory concession.

Slapping all that together, it’s still tough to see a premiership on the horizon for this team in this year. Geelong is a street ahead of the competition – figuratively and literally given it is two wins up on second – and have no obvious chinks in their armour. The Eagles’ date with the Cats exposed its critical problems in every way possible.

There is time for West Coast to address the challenge. Naitanui’s return will help, as will some natural improvement from the midfield and a more settled backline. But right now, West Coast looks a world away from the 2019 premiership despite sitting in the top four.