Round 16 of the 2019 NRL season is upon us – the last of the Origin-affected bye rounds where there’s only four games to be played ahead of next Wednesday’s State of Origin decider.

New South Wales and Queensland players are having the weekend off, which leaves a very interesting set of team sheets for this St George Illawarra vs Melbourne match-up.

We’ll see a sprinkling of new and familiar faces, new club signings getting their first run in a different jersey and a few regulars who we know can be relied on.

The Storm are three games clear on top of the table and are racking up points for fun. They’ve got the best attack (359 points), matched by the stingiest defence (only 169 conceded, just 12 per game). Their 12-2 win loss record is without peer this season.

Their hosts St George Illawarra sit tenth with six wins from 14 games. Their season to date has been anything but what was expected from Dragons fans. They were one play away from a preliminary final in 2018 after finishing seventh, but they’ve regressed badly from the side that was in the top four for the majority of last year.

Life doesn’t get any easier against Melbourne, who in their last meeting put a lazy 52 points on the Dragons. It was another strange Origin period game back in Round 17 last year. The Dragons led 30-28 after an hour, then lost 52-30. The Storm hold the recent head-to-head record 7-3. 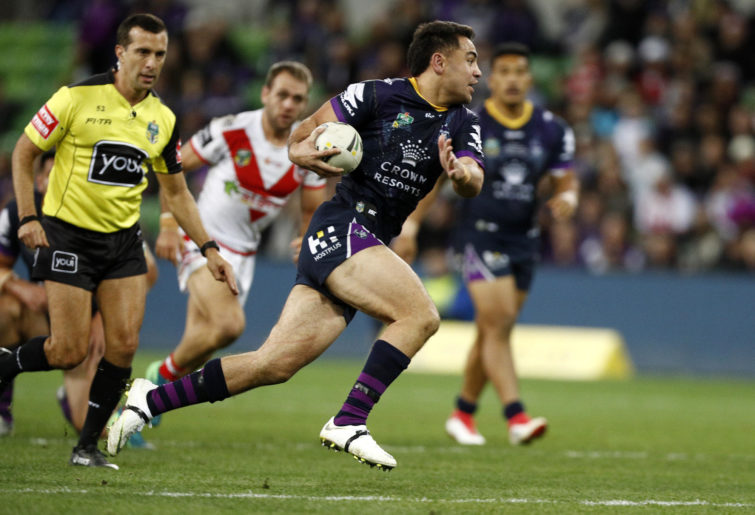 Origin has had a massive impact on this game. For the Storm, Queensland coach Kevin Walters’ son Billy Walters will play five-eighth in the absence of Cameron Munster. He’ll partner with halfback Brodie Croft. Former New Zealand Warriors centre Solomone Kata will make his Storm debut in the centres and Sandor Earl returns on the wing.

For the Dragons, Jai Field and Darren Nicholls will take the reins in the halves. Nicholls is a 30-year-old halfback with a solitary first grade game to his name, Field a 21-year-old who has played five games this season. There’s a lot of responsibility on this couple.

Cameron Smith’s decision to hang up the maroon jersey has paid dividends for the Storm. He’s in great form with seven try assists and he gets on his bike out of dummy-half quickly. He’ll revel in the uncertainty he can create for a jumbled Dragons line-up.

There’s a lot of pressure on St George Illawarra rake Cam McInnes to match Smith’s effort, and he’ll need to to give his team a chance of the upset. McInnes is a quality player who’s on track to at least match his 2018 output, which had him in discussions for the New South Wales No.9 jersey before Damien Cook swept all before him.

Melbourne are an attacking threat from anywhere, with line breaks (58) and tackle breaks (492) that will make the most of the Dragons’ ineffective tackles (254, second worst in the NRL).

On the plus side, the Dragons don’t give away too many penalties (85, third least in the NRL) and their ball security is pretty good (125 handling errors, fourth best in the NRL).

If you want to beat the Storm, no matter how depleted they are because of State of Origin, ball control and discipline in the tackle is absolutely critical.

Dragons coach Paul McGregor knows what’s at stake and it’ll be interesting to see how his reshuffled forward pack and makeshift halves pairing go about their business. After this week the Dragons have Canberra, Penrith, Souths and Parramatta – all teams above them. If they can’t at least break even in that run, they’re gone.

Somewhat surprisingly, McGregor’s sides match up pretty well against the Storm and their master coach Craig Bellamy. Bellamy leads the head-to-head 5-3 and the teams have traded wins in their last five meetings.

Prediction
With a combined 11 players missing for Origin duty, the quality or entertainment factor we’ll get from this match-up is genuinely up in the air. We could get an absolutely error-riddled barn burner where defence is optional like we did in 2018, or we could get a too-scared-to-make-a-mistake cautious grind.

Both of those outcomes suit the Storm just fine, but there’s too much on the line for the Dragons if they want to keep their finals hopes alive.

It’s a speculative call, but I’m tipping the upset because of the unpredictability of the Origin period and because this is simply a must win game for McGregor’s men.