Collingwood's failure is all too familiar

To fully understand Collingwood’s unraveling over the last couple of months, you need to look past the current muckraking about internal issues.

It’s such lazy journalism. Somebody cites internal issues. Naturally, the club (if asked) would deny it. Nothing is proven or disproven. The accusation still stands. Wow. These people must have sources.

Logically, though, does it make sense?

Outside of the first quarter last week, Collingwood matched Greater Western Sydney and actually won many of the stats – including the inside 50s.

A week earlier, the Pies defeated premiership fancy West Coast on their own turf.

This disharmony is pretty selective, whimsical stuff, because it’s only affecting effort sometimes.

The truth is lots of things have happened that have gnawed away at the fabric of what made the club successful last year.

For much of the season, they’ve missed Taylor Adams and Brayden Sier. The game against GWS was the first match they’d played together. Dayne Beams hasn’t worked out.

It means lacking those first-possession mids who’ll win the ball at any cost, and feed it out to the likes of Scott Pendlenbury, Steele Sidebottom, Adam Treloar and Tom Phillips.

When these guys get to play on the outside, their strengths can be maximised to create, link, and attack – with Pendlebury his class and decision-making, Sidebottom his skill, Treloar his line-breaking pace, and Phillips is gut-running.

However, these guys have been getting dragged inside and being stifled, which means the team loses the bulk of that other productivity.

If you look at the match against West Coast, Jordan de Goey went into the middle and started providing the drive from stoppages. Once that happened, it pushed these other mids into positions that could maximise their strengths.

The Magpies clicked into gear – the same gear they sporadically hit against the likes of St Kilda, Carlton and the Bulldogs, when they kicked away in those games.

Because of the midfield’s struggles, they’ve failed to click with arguably the most dominant ruck in the league – Brodie Grundy. There’s no real synergy. The midfield is too often caught flat-footed and trying to handball their way out of congestion, but nobody’s providing any run. Often, it’s seemed as if Grundy has got frustrated and decided to start doing it himself by plucking it out of the ruck or tapping to his own advantage.

The defence started strongly, but has become pockmarked. Jeremy Howe and Tom Langdon have both missed games (and Langdon will miss the rest of the season), which means Collingwood have been deprived of their intercept marking and go-to defenders who can play tall and small.

Darcy Moore started brightly but has struggled with injury. Jordan Roughead has been a great addition, but he’s the cornerstone the defence is built on, rather than the fanatical counter-attacker.

In regards to the defensive runners, Brayden Maynard has occasionally been forced to play tall, while Jack Crisp seems to be playing higher. James Aish has been in and out. Nathan Buckley has used Levi Greenwood and Chris Mayne as stopgaps. With no disrespect to either player, they’re blue collar, rather than fast, manic counter-attackers – like Crisp and Maynard as their best – who can break open opposition.

They’ve often been dragged to the last line also and neither are last-line defenders. Opposition coaches must salivate at the prospect of Greenwood or Mayne (and Aish) being dragged to fullback. This has meant the talls have been sucked up the ground, which has left their defensive structure inverted.

In short, the run’s gone, which is why they’ve been gambling on the likes of Isaac Quaynor, John Noble, and Flynn Appleby.

Last year, the unpredictability of the forward line was a strength. In any given week, you could expect Jaidyn Stephenson, Jordan de Goey, Will Hoskin-Elliott, or Josh Thomas to pop up and kick goals. Brody Mihocek played as a running tall. Mason Cox drifted in and out. As an opposition coach, it was impossible to plan against, because the side never relied on just one or two players being the go-to forward.

This year, it felt like Jamie Elliott was being nursed into his return through full-forward, while Stephenson was initially thrown back. 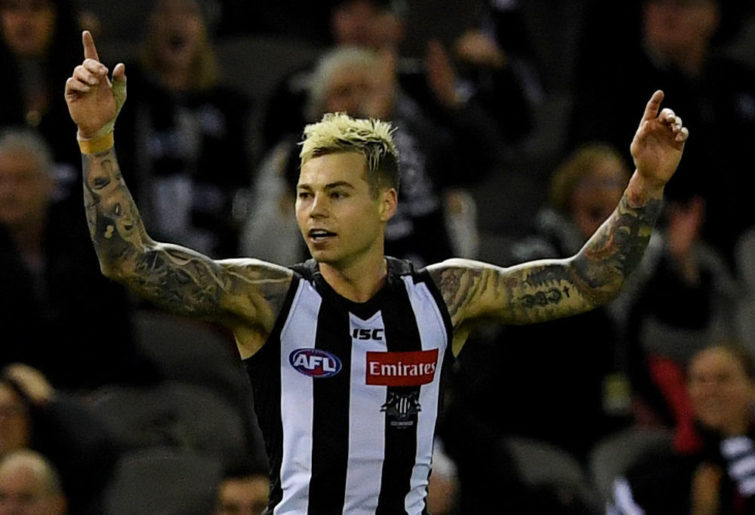 Since Elliott’s injuries, Stephenson and de Goey have both camped at full forward, which has meant other smaller forwards have been pushed wide and high, and Mihocek and Cox are drifting up higher. The loss of Stephenson has hurt, as he constantly presented with relentless leading which was impossible to zone against.

Now, the forwards struggle more so because of what’s happening further afield.

The Pies move the ball glacially, which allows the opposition to flood back. When Collingwood near their forward 50, they bomb the ball blindly to Cox, hoping he can drag in a miracle mark, but opposition swarm and maul him (again, Cox may miss this week with general soreness – is it any wonder that’s happening with this delivery).

Once the ball hits the ground, there has been nobody to crumb or to apply pressure to opposition taking the ball out. De Goey plays more as a lead-up forward. Josh Daicos has had limited chances. Callum Brown has shown glimpses. They lack the Anthony McDonald-Tipungwuti-type – a small forward who can apply frenetic pressure and capitalise on half-chances. Travis Varcoe had done this to some extent, but is struggling. Josh Thomas is now in the reserves.

The team has become predictable, and failed to adapt as they did last year when injuries hit. In 2019, it’s bomb, bomb, bomb, and hope for the best.

A forward line of Gary Ablett Snr, Tony Lockett and Peter Daicos would struggle in that system, let alone Mason Cox and Brody Mihocek – both players who are actually still inexperienced (Cox has played 56 games, and Mihocek 33 games).

Compare that to the clash against the Eagles, when Collingwood tried to move the ball quickly and with purpose. Suddenly, Cox and Mihocek looked dangerous. Wayne Carey cited people are dreaming if they believe Cox would reproduce his 2018 preliminary final form.

The difference between that game and this year isn’t Cox but the delivery. In the prelim, they dropped it out in front for him to lead to. Now they’re bombing it high.

Every facet of the side is misfiring. Whereas last year injuries provided opportunity – the injury to Ben Reid forced them to play a smaller, and unpredictable forward line – this year they’ve lost players they can’t afford to lose and failed to adapt.

Shifts have changed the team dynamic. It seems the only thing the coaching staff have done to try change this is throw de Goey in the middle, and to rely on three youngster to solve their lack of run out of defence.

The worst problem here is that this form decline has happened before. Last year’s surprise effort and getting within 90 seconds of winning a flag has wiped clean a lot of memories.

But as I watch now, I don’t wonder what’s happening. I don’t gravitate to rumours of internal issues. I don’t think it’s rocket science.

Collingwood reached the halfway point of the 2014 and 2015 seasons with an 8-3 record. In the second half of those seasons, they went 3-8 and 2-9 respectively, crashing ingloriously out of the top eight.

When things start going wrong, when they don’t have their ideal team to execute their ideal gameplan, they struggle.

In Nathan Buckley’s eight years, Collingwood have always been top-of-the-table with injuries. One year is an outlier. Two years is bad luck. Three years? Well, you’d have to start asking questions. But eight years? Nobody queries it. The club itself don’t seem to investigate it. It’s almost accepted now that they’ll just keep happening.

Throughout 2014 – 17 I defended Buckley. In two drafts, they netted Matthew Scharenberg, Nathan Freeman, Ben Kennedy, Tim Broomhead, Jackson Ramsey, Jonathan Marsh, and Brodie Grundy – that’s one hit from seven choices (five of those in the top 20). Then throw in recycled players such as Jordan Russell, Clinton Young, and Quinten Lynch who didn’t work out.

So they tried to rebuild but didn’t get quality in and when they did, the players struggled with ongoing injuries, as was the cases with Scharenberg, Freeman and Young.

Belatedly, the Pies finally started getting that list management right and then it became a case of waiting as they pumped games into the inexperienced players and developed a system.

Richmond’s flag wasn’t made uniquely in 2017, nor was Bulldogs’ in 2016. The same with Hawthorn’s three-peat or Geelong’s multiple flags. These were all a result of long-term construction.

It seemed logical that once Collingwood had got experience into their players, once they’d got some continuity together, they’d rise up the ladder.

And they did that in 2018. Even if they lost the grand final, it seemed they’d arrived and would at least be in contention a few more seasons. That’s the way of things, right?

Yet it’s already being undone.

Carlton and North replaced their coaches, and they were immediately galvanised. I’m not suggesting Buckley be replaced, I simply cite those clubs to show that different handling of the same list produced different results.

From the outside looking in, Collingwood’s strategy is to do the same thing yet again and hope desperately at some point it’ll click. In all likelihood, it won’t.

They do have the benefit of some players coming back, but is it too late?

If the deteriorating continues, if they’re to yield the same result, who could ever have faith in this coaching and playing group to ever produce a different outcome? Even if they were sitting 11–0 in 2020, why should anybody be confident they’ll keep motoring forward given the crushing weight of historical evidence?

The challenge now is for the coaching staff to work out a new way through their issues, rather than repeat the mistakes of the past.