The first rush of enthusiasm on looking at this is clear: a high-achieving swimmer on the circuit – Australian Mack Horton – decides to take a stance.

It’s not about refugees, Donald Trump or climate change. Unlike other sportspeople of history, his opposition is directed at his sport, his spear of indignation sharpened against a target closer to home (or pool).

He will not share a podium with others who have won medals, taking what he no doubts regards as a principled position.

He nabbed the silver in the 400m freestyle, but it is clear who Mr Gold is. At the world swimming titles in Gwangju, it was China’s Sun Yang, a sporting titan with a blemished record. 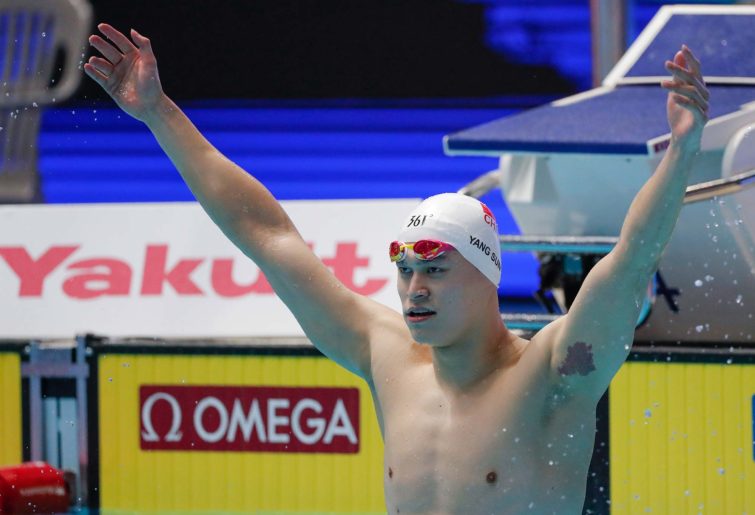 Horton’s stance – in this case, a visible one of standing back from the podium and refusing to share the stage with Sun – might be seen as more ethical than political; divorcing these, however, is often an exercise in futility.

In the 200m freestyle, British bronze medallist Duncan Scott decided to take a leaf out of Horton’s book and give Sun the same treatment.

Sun served a three-month doping ban in 2014 and is facing a Court of Arbitration for Sport hearing in September over claims he smashed a vial of his own blood due for drug testing. A panel of the international swimming federation FINA bought Sun’s account, the World Anti-Doping Agency duly appealed the decision.

“His actions and how it has been handled speaks louder than anything I could say,” explained Horton.

At the Rio Olympic Games in 2016, Sun splashed Horton in the warm-up pool. Horton sniped, telling the media his opponent “splashed me to say hi and I ignored him because I don’t have time for drug cheats.”

Sun returned the watery serve, suggesting that Horton was using “cheap tricks” to unsettle him in an overly inflated psychodrama.

“I have done what it takes to prove I’m clean,” the Chinese swimmer said. “All athletes should be shown respect.”

His current riposte directed at the Australian swimmer is to conflate the issue of performance and country: “Disrespecting me was okay, but disrespecting China was unfortunate.”

This latest display of indignation did not impress the executive of FINA. Administrators, in the great filing tradition, tend to see moral matters in sport as matters best left aside: it if can be placed in a cabinet, preferably marked ‘secret’, all the better. If not, punish the principled irritant.

Issuing a curt warning to Horton, FINA claimed to respect “the principle of freedom of speech” but such freedoms could only be exercised “in the right conduct”.

This stance is shoddy, treating athletes as apolitical beings who are meant to partake in the show with a blissfully untroubled conscience. Accordingly, they are to follow regulations and sporting policy with mute approval.

“As in all major sports organisations, our athletes and their entourages are aware of their responsibilities to respect FINA regulations and not use FINA events to make personal statements or gestures.”

“I am no fan of Sun Yang,” he observed on Twitter. “But he has served his suspension for a doping violation and he has been cleared by a FINA panel of refusing to provide a sample. Innocent unless and until proven guilty.

“Not standing on the podium with him should attract a hefty penalty.”

Never you mind that WADA has appealed the decision, casting a lengthy cloud over aquatic proceedings.

I am no fan of Sun Yang

But he has served his suspension for a doping violation and he has been cleared by a FINA panel of refusing to provide a sample.

Innocent unless and until proven guilty.

Not standing on the podium with him should attract a hefty penalty.

It was left to such figures as Australian Olympic Committee chief executive Matt Carroll to offer his side order of support for Horton.

“The Australian Olympic Committee is all for supporting and protecting clean athletes,” Carroll said, continuing that Horton is “obviously an athlete of great conviction, a strong young man and we respect Mack for his conviction.”

Now Sun’s body, like most elite athletes, is not his own. He is the property of the state, real estate and flesh in water, an owned athletic porpoise. In a sense, he is right to suggest that repudiating him as swimmer is not merely personal, but a broader rejection of a policy, an idea. Systems come into play, and we are faced not only with individual decisions, but those of higher powers. Sporting bodies straddle the middle, often compromised ground.

Horton’s judgment may seem extreme to those more interested in ceremony than substance. Such a view reduces protest to the level of spiteful choice in a jungle of competitive instincts.

All professional, sponsored athletes are in the business, desperate to win and belied into thinking that their own efforts are somehow elevated in their distance from the manipulation of state.

Whatever the disgruntlement or the disagreement with Horton, it is admirable to see a figure who at least knows his mind. We can question it, probe its failings, question its righteous self-importance.

But the reprimand from FINA is unimpressive, showing again how sporting administrators remain fickle when it comes to public displays of opinion on the part of sports personalities.