That is as good a Test win as you’ll see.

To come back from 8-122 to not just win, but to do so by 251 runs, is remarkable. If Australia do go onto retain the Ashes, Edgbaston 2019 will long be remembered as one of their more important Test wins.

While Steve Smith was obviously the standout for Australia, he was ably supported by a number of his teammates – although a few need to lift for Lord’s.

Cameron Bancroft: 3/10
Made just 15 runs on his return to the Australian side, which only makes dropping Joe Burns (you know, the guy who averages 40 and has four Test centuries? No?) more perplexing. Gets a couple of bonus points for an outstanding short-leg catch on Day 5 to dismiss Joe Root.

David Warner: 1
Warner made even fewer runs than his opening partner, falling twice to Stuart Broad as the England veteran targetted him perfectly from around the wicket. Needs to find a way to counteract that tactic, and soon.

Usman Khawaja: 4
After failing in the first innings – not that he was alone on that front – Khawaja’s aggressive 40 in the second helped carve off much of England’s lead.

Steve Smith: 10
The performance of the Test. Smith’s first-innings century was a masterclass in pulling his team out of what seemed an un-rescuable situation. His second was just inevitable. Fitting that the ball flew his way to second slip for the catch to finish the Test – even if he did drop it. Not that it mattered. He made no mistake with the next one.

Travis Head: 7
Head has cemented his place in this side with another couple of strong contributions. Needs to stop losing his wicket after strong starts, but there’s plenty to like about the value he puts on his wicket early on.

Matthew Wade: 8
Played all around a straight one in his comeback Test innings, but Wade was superb in the second. His first century in the format since 2013 put England out of the game, and showed just how worthwhile the radical idea of picking an in-form batsman is. 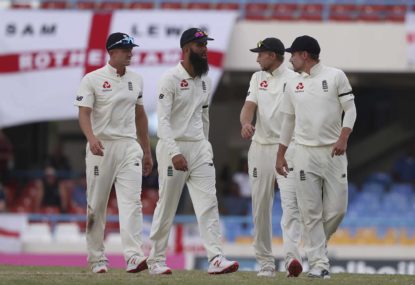 Tim Paine (c): 5
A mixed bag for Paine. His Day 1 dismissal came via a wretched shot, and he missed a few tactical tricks as England got close to 400 – not getting Pat Cummins or James Pattinson to go at Stuart Broad with the short ball early, for example. But he chipped in with the bat on Day 4, captained the side just about flawlessly on Day 5, and showed behind the stumps how valuable picking a genuine gloveman can be.

James Pattinson: 7
A solid return to Test cricket for Pattinson. Was the most dangerous Australian bowler in the first innings and bludgeoned a few handy runs to ensure the side’s lead was a bloated one. Wasn’t really needed on Day 5.

Pat Cummins: 8
Cummins looked as un-threatening as I can remember with the new ball in England’s first Test. Thankfully for Australia, that didn’t last long. Got a hint of reverse swing as he claimed important breakthroughs in both innings. His seven scalps for the Test helped him to 100 wickets in just his 21st match – and all at an average under 22.

Peter Siddle: 8
It’s an injustice that Siddle only finished with two wickets for the match. He was the most consistent bowler throughout, hitting an immaculate length and scrambling the seam to find consistent purchase on a quite lifeless pitch. Without his 44 runs in the first innings, Australia probably don’t win this Test.

Nathan Lyon: 9
Two chasms in class were obvious at Edgbaston. The first was between Steve Smith and every other batsman. The second was between Nathan Lyon and Moeen Ali. Lyon might have been a little out-of-sorts early in the first innings – although he still finished with three wickets – but was unplayable in the second as he bowled Australia to victory. Is now just the fourth Australian to claim 350 Test wickets, and it won’t be long before he passes Dennis Lillee’s 355.