Facing a full-pitched Ben Stokes delivery at Edgbaston, Steve Smith’s front foot was outside leg stump, his back foot deep in the crease as he creamed another boundary through the covers.

Stokes stood bemused mid-pitch. He uttered some words towards Smith, presumably some technique tips. Smith shrugged his shoulders and gave a bit of lip back. Stokes, like many of the world’s bowlers over the years, no doubt wondered how Smith can be so unconventional yet so incredibly effective.

It wasn’t as if his footwork was sluggish because it was early in Smith’s dig. He was on 89 in Australia’s second innings of the first Ashes Test in Birmingham, with the score at 4-209 and a lead of 116 runs.

Smith, of course, went on to make 142 – his second century of the Test – to set up Australia’s thumping win after being in massive strife on day one.

His batting is intriguing for many reasons; the fidgeting, the idiosyncrasies, the wrist-work.

But what makes Smith so unique is how he values practicality above anything aesthetic. He plays some stylish strokes, but he’s not as graceful as Ricky Ponting or Michael Clarke. He doesn’t whack it as hard as Matthew Hayden or Andrew Symonds.

He’s more Steve Waugh than Mark Waugh. Smith is so proficient is working the ball into gaps and so attuned to the risk and reward depending on the state of the game.

Smith isn’t worried about appearances and being lauded for his elegance and polish. Smith infuriates opposition bowlers.

His technique isn’t textbook but he thinks deeply about how he can steer, manoeuvre and guide the ball around the field.

Pragmatism is key. In fact, selectors were happy for the Australians to get into the grind with England by picking Peter Siddle and not Mitchell Starc.

They went for Cameron Bancroft and not Marcus Harris. They weren’t focussed on blowing England off the park with pace and power. They were comfortable to be patient and combative.

It worked. Australia only really got on top midway through day four.

It’s not too far-fetched to draw a parallel with the mindset the Wallabies might look to adopt as they head towards the World Cup with two Bledisloe Cup matches against the All Blacks, starting with Saturday’s match in Perth.

One major similarity is practicality.

We’re all familiar with the recent record: four wins from 13 Tests in 2018 — the worst year for Australian rugby since 1958.

The Wallabies conceded a heap of points. They averaged just 19.2 points per game – just the second time since 1984 the Wallabies failed to average more than 20 points per match. Stephen Larkham, Australia’s attack coach, was sacked.

So the Wallabies can’t expect to light it up during the World Cup in Japan. They aren’t going to morph into a lethal attacking juggernaut over the next few months.

Plus World Cups, in the knockout stages at least, tend to be low-risk battles. Springboks coach Rassie Erasmus and All Blacks coach Steve Hansen have already stated they expect this World Cup to be dominated by smothering, rush defences that will likely mean low-scoring affairs.

So how should the Wallabies approach the Bledisloe Tests? Aim to win ugly.

Michael Cheika has repeatedly stated that he wants to craft a Wallabies team that Australian rugby fans can be proud of.

It’s an admirable ambition, but it seems like the coach might quantify that goal as moulding a side to be entertainers, with an emphasis on keeping the ball in hand and moving the pill side to side.

It hasn’t worked. Wallabies fans can be proud of a side that can keep it simple and grind out a victory. To win ugly. 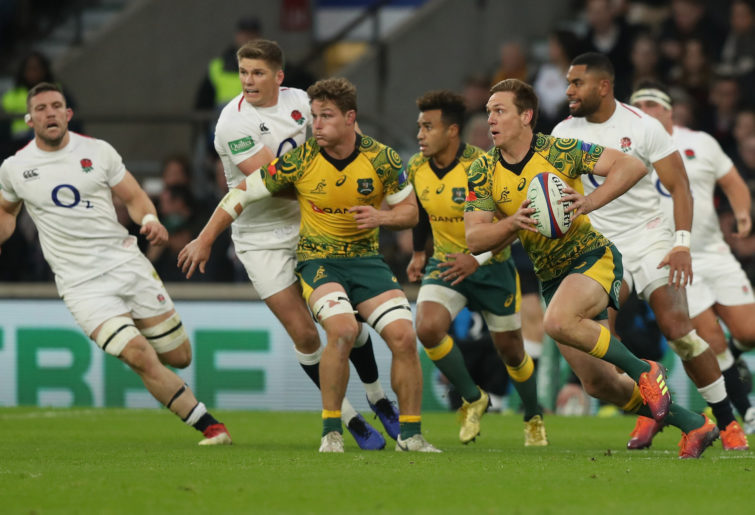 Are the Wallabies ready to shelve the running to win ugly? (David Rogers/RFU/The RFU Collection/Getty Images)

Kick for territory. Get Nic White or Will Genia throwing up box kicks for Reece Hodge and Marika Koroibete to contest. Get Christian Lealiifano chipping and grubbering in behind rush defences.

When deep inside opposition territory, set up for field goal attempts and be content with moving up by three points. Kick for the corners and try to scrap for a lineout win against the throw.

Stay disciplined and aggressive in defence, and ensure that if only two tries are conceded per game, you’re always in with a chance. South Africa have proven this works over the last few years against New Zealand.

The Boks have stripped things back and have pushed them hard every time, including a memorable win in Wellington last year and a draw in the same city a few weekends ago.

Don’t think Boks fans are depressed that Erasmus hasn’t got them being overly creative in attack. They’re very happy to win ugly.

Do you think Brumbies fans were overly concerned that a good chunk of their tries during this year’s Super Rugby season came from lineout drives?

That hooker Folau Fainga’a dived over for 12 tries because of the simple and efficient ploy from the lineout? No way.

Perhaps Cheika doesn’t think the Wallabies can win ugly. Does he think that he doesn’t have the cattle, especially the dominant forward pack, that can assert themselves physically and bully other teams?

If so, the win over Argentina in Brisbane should give him confidence that they can grind out victories in big games. That’s a fine and feisty Pumas side, and to beat them, even in Australia was a top-drawer win.

Strip it back. Dial down the second-man phase play and wide midfield passing. Kick for space or kick it high and then pile through in defence. Win ugly.

They crave a gritty win over the All Blacks that gets them excited for the World Cup. There’s beauty in simplicity. It doesn’t have to be fancy. Just find a way to get the job done. Like Steve Smith.