To closer align the outcome of cricket matches with skill, I propose to replace the toss with a scheme to decide which team bats first.

In brief, the scheme calls for both teams to submit sealed bids where each specify their preference to bat first or to field first and also specify the number of runs that each is willing to give to the other for getting their preference.

An average of the bids is awarded as incremental runs for the team that bids the lower number of runs while the other team gets their preference for batting or fielding as specified in their bid.

Settlement at the average of the two bids allows for both teams to be happy with the settlement in comparison to their respective bids.

According to ESPNCricinfo, the 2019 Cricket World Cup witnessed a pattern of both captains wanting to bat first after winning the toss – a habit also seen in the IPL.

The book Fairly Random: The Impact of Winning the Toss on the Probability of Winning by Gaurav Sood and Derek Willis, who noted the toss-winner had a 2.8% advantage over a 40,000-game data set. This is a material advantage in elite sport.

The toss therefore undermines the fundamental requirement of any sporting contest that is to have competing teams start on even footing on all known conditions except for skill.

In my proposal, both teams submit sealed bids for a certain number of runs, based on their analysis of the conditions, for the right to bat first. Then the team with the higher bid bats first and the team that bats second will have their score augmented by the average of the two teams bids.

Let’s use an example. Suppose team A’s analysis of the conditions led them to believe that batting first is worth an extra 31 runs. Accordingly, team A bids 31 runs to bat first.

Suppose team B bids 53 runs to bat first. Since team B’s bid is higher, they will bat first and team A will be awarded 42 runs – the average of both teams’ bids.

Both teams, again, are happy. Team A got 20 more runs and team B gave away 20 fewer runs than their respective bids.

Let’s examine a third case. Both teams bid identical values for right to bat first. To resolve this case, we use a coin toss and the team that loses the toss gets the bid value as compensation to bat second. Alternatively, we can ask for new bids.

In a fourth example, both teams bid identical values for right to field first. We resolve this in the same way as the third case, with either a coin toss or with new bids.

The sealed bids of each team should be submitted at the time that is usually reserved for the coin toss – about 30 minutes before the match starts. The submitted bids are opened immediately and the batting order is determined.

Each team submits an odd number as a bid or zero.  In case one of the bids is zero and the other is an odd number, we can round up the second number divided by two. This ensures that if both bids are greater than zero, the average of two bids will always be a whole number that is either odd or even. 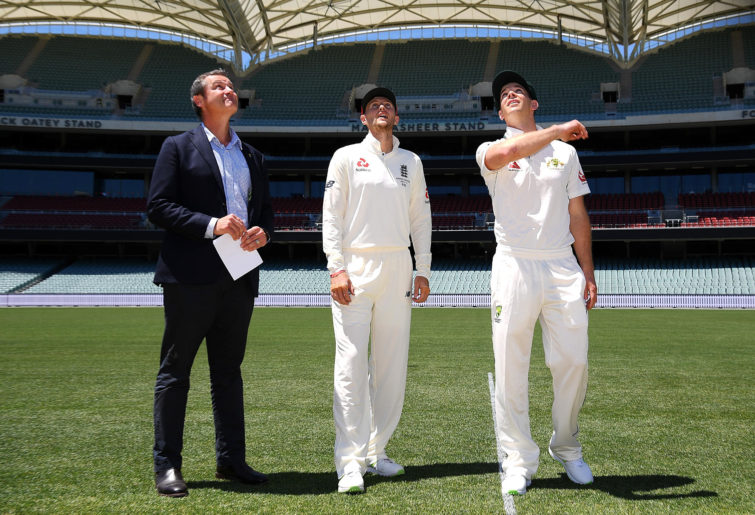 Time to toss the toss? (Photo by Daniel Kalisz/Getty Images)

In rain-affected limited games, the bids are prorated to the number of overs for which the game is contested over. Sometimes we may have to round off the prorated number.

In a sixth case, say team A bids 13 and team B bids seven for the right to bat first in a 50-over game. The game is shortened to 20 overs after team A completed 50 overs.

The average bid was ten runs, and the game is shortened to 40% of its original length, so team B’s target becomes the DLS score minus four runs.

Can this scheme be gamed? As long as a team bids what they deem fair, then they cannot be gamed.

Let’s say team B, trying to game team A, somehow knows team A was thinking of bidding 19 runs so bids 21 runs to bat first. Then, of course, team B will win the bid. However, team A gets 20 runs – only one run more than what they thought was fair.

Let’s say team B – again somehow knowing that team A plans to bid 19 runs – bids five runs to bat first, then team A will bat first and give only 12 runs instead of 19 runs that team A bid.

Let’s say team B bids seven runs to field first and team A wants to bid 19 to bat first, then team A will bat first and give away only six runs.

In all cases, we see that team A – regardless of what team B bids – will be happy in relation to their evaluation of what’s fair. Team A is immune to team B’s behaviour or misbehaviour.

In terms of sensitivity to match-fixing, the sealed bids are opened at the scheduled time usually reserved for the toss – and at this time, regulators, media and the public can know the bids submitted by each captain. This introduces an element of transparency and potential scrutiny to the process.

Any bids intended to impart favour to the opposite team can potentially be discerned by observing abnormal differences of the two teams bids or perhaps by comparing each bid to historical bids for that ground or those conditions. Captains have a natural disincentive to make such bids since abnormal bids will invite questions from the public, officials, or the press and risk reputational loss.

Furthermore, it is likely that teams, their management and support staff will debate the relative value of batting first vis-a-vis fielding first. This will make it harder for a single bad actor to have undue influence on the bidding.

Does the toss add to the allure of the game?

Including a bias to favour the team that correctly calls the toss adds no more to the game’s charm than umpire bias.

Removing the toss eliminates some of the prose and retains the poetry of the game. The allure of the game is preserved in the unpredictable outcome of skillfully directed activity and has no additional need for an external source of randomness.

The most skilled of cricketers cannot consistently control where they can direct a ball while bowling or while batting. There are inches between a half volley and a yorker, between a ball that beats outstretched hands and one that is pouched, and between the blade’s outside edge and the sweet spot. This is the game’s timeless charm.

David Franklin, writing in The Cricketer last April, proposes a scheme where each teams bids a certain number of runs without specifying whether to bat first or field first to basically win the toss.

The team with the higher bid, in effect, wins the toss and chooses to either bat or bowl and in turn gives away runs corresponding to the winning bid to the other team.

But by settling the average of the two teams – as outlined in my scheme – both captains walk away happier than under Franklin’s proposal.