Ken Hinkley upbeat despite Port being crushed by Roos

Port Adelaide coach Ken Hinkley was surprisingly upbeat after North Melbourne smashed his team by 86 points to knock them out of the eighth spot.

For the coach of an AFL side with finals aspirations dealt an embarrassing blow by an also-ran, Port Adelaide’s Ken Hinkley was remarkably upbeat after the 86-point smashing handed out by North Melbourne.

What Hinkley had to be so optimistic about is anyone’s guess because the Power’s confounding inconsistency returned in spades on Saturday night after a promising fortnight where they defeated Essendon and Sydney to replace Adelaide in the eighth spot.

Port barely gave a yelp as North, who managed to kick just one goal in an entire game the week before, carved them up like a Christmas turkey again and again in a 22.12 (144) to 8.10 (58) demolition at Marvel Stadium.

North star Ben Brown, with a brilliant 10.1 effort, eclipsed the Power’s score off his own boot, Todd Goldstein monstered Paddy Ryder and Peter Ladhams and the Roos had a staggering 514 possessions to Port’s 307.

But far from lash his players after the abysmal display that yanked their finals destiny from their own hands, Hinkley’s tone was almost conciliatory.

“Clearly it was incredibly disappointing … but the performance was so far away from what we’ve been,” Hinkley said.

“It’s a really difficult game for us to go through but what we need to do is not overreact right now…because if you look at that game everything we could possibly get wrong, we got wrong.

“We were belted in areas of the game where we’re consistently pretty good – at around contest, around stoppage, defensively we couldn’t control much of the game at all.

“We have seen sides have an absolutely disastrous game but turn it around and bounce back and that’s up to us right now.

“With one round to go there is still so much going on and so much still to play for.”

Cross-town rivals Adelaide, belted by Collingwood by 66 points just hours earlier, replaced the Power in the eighth spot on percentage on the back of the embarrassing result that cost Port almost six percentage points.

The Power must now defeat Fremantle at home in the last game of Round 23 and hope other results have gone their way to make the finals.

How did you not see it, Razor? 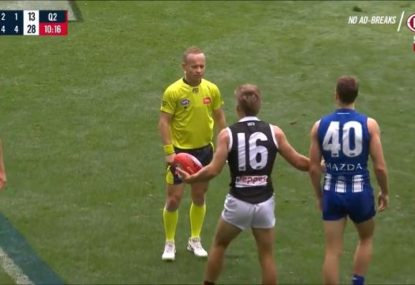 North Melbourne’s Majak Daw could still make a memorable AFL comeback on Sunday but has been sent home sick from Kangaroos’ training on Friday.