A story doing the rounds this week suggests the big wigs at the NRL have been listening to Beyonce – and heeding her advice.

Having awarded Cameron Smith a Waterford crystal football in recognition of his 400th NRL game, as well as commissioning a mural in his honour to be painted in a Melbourne suburb, the NRL also decided it was fitting to show some gratitude to Smith’s wife, Barbara.

Specifically, she was gifted a diamond ring for the hard work she has done behind the scenes to help her hubby become one of the greatest rugby league players of all time.

“Our biggest stars wouldn’t be where they are today without the women in their lives,” Todd Greenberg told News Corp.

“We make no apologies for honouring the amazing role Barb has played and the sacri­fices she has made throughout Cameron’s career.”

Todd liked it, so he put a ring on it. 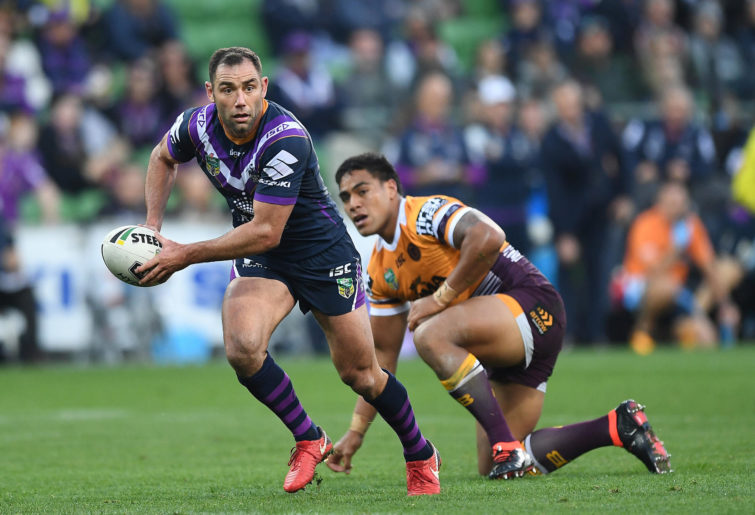 And, predictably, there have been those who have bemoaned the action as further evidence of the NRL’s all-too-cosy relationship with the Melbourne Storm.

Apparently, by giving Mrs Smith a nice piece of jewellery, the NRL are helping the Storm to circumvent the salary cap – the assumption presumably being that the Smiths took the ring to Cash Converters the next day.

News were keen to point out that the ring “was not included on the official register of gifts paid for by the governing body”.

I can kind of see where they are coming from on that one, but then again, it’s not a present for Cameron, is it?

Having spent my 20s with a stud in my nose, I’m hardly going to have a crack at a bloke who decides he wants to wear a diamond ring – but, and I may be wrong, Cameron Smith just doesn’t strike me as the type to ask his wife if he can borrow her bling for a night out.

And with his annual salary estimated at $1 million – just from his club, to make no mention of other endorsements – we can also assume that the Smith family don’t require visits from the Smith Family to keep food on the table.

The ring may be worth thousands, but it’s staying put on Barb’s finger, not being hocked to help pay for a sports car.

So the suggestion a nice token of gratitude to a woman who moved away from home and her support network, raised three kids with very little help – Cameron himself recently spoke of how much of the heavy lifting his wife did on that front on the Matty Johns Podcast – and backed her man to the hilt on his quest to be the best footy player he could be is some form of subterfuge is not only ridiculous, it’s insulting.

How about we give people a little bit of credit every now and then.

The NRL are trying really hard to no longer be the neanderthal code that treats women as second-class citizens, having instigated initiatives like this weekend’s Women in League round, the NRLW and seeing women whistle-blowers refereeing top-flight footy.

Then, a few weeks ago, a player racked up a quadruple century of NRL matches for the first time in history, and the governing body had the perspicacity to recognise the woman who made it possible.

James Graham’s 400 games is a wonderful achievement too, but considering more than half were for the Super League, it’s completely understandable that the NRL isn’t making the same song and dance over it – you don’t congratulate someone for ten years of work if eight of them were at another company.

And while the saying is ‘she deserves a medal’, Barb Smith probably preferred a diamond ring.

A woman who has done the hard yards that no-one else saw and gives 110 per cent for both halves – because her other half was away playing footy for large parts of the year – was given a gift. An expensive gift, sure, but it’s a multi-billion-dollar enterprise that bought it for her – did we expect them to give her a ring they won in a skill-tester?

As for suggestions it’s money that could be better spent elsewhere, that there are more deserving women at the grassroots who could have done with the financial boost spent on the ring? In a nutshell, piss off.

If you’re reading this, you’re likely living in Australia – a life of unimaginable privilege compared to 98 per cent of the world’s population, even if you are on our country’s bottom rung. So unless you live on bread and water and have never accepted a gift in your life, insisting that your friends donate to charity in lieu of buying you something nice on your birthday, you’re in no position to cast judgement on people who give gifts to those who don’t really need them.

It’s the world we live in – sometimes we spoil people. It takes a special kind of pettiness to try and make people feel bad for doing something nice.

And ultimately that’s what’s happened here: the NRL did a nice thing for a person who deserved to have a nice thing done for them.

The idea it was underhanded, manipulative or – as News reported – has left the governing body “scrambling” is laughable.

Congratulations Barb – yours is a huge achievement and you deserve any and all recognition that comes with it.