Australia have taken a massive step towards the World Cup quarter-finals – and confirmed a berth at next year’s Olympics – with a tense win over Lithuania.

Sick of near misses, the Boomers aren’t getting ahead of themselves after Patty Mills’ latest heroics dragged them within reach of a basketball World Cup quarter-final in China.

Mills (23 points) again delivered at the death, hitting a decisive three-pointer with 30 seconds to play in a 87-82 defeat of Lithuania on Thursday to emerge from Dongguan’s so-called group of death a perfect 3-0.

The good news kept coming soon after full-time, with New Zealand’s 103-97 loss to Greece knocking the Kiwis out of medal contention and ensuring the Boomers’ qualification for next year’s Olympics in Tokyo.

More immediately, victory has given Australia a massive leg-up entering the second round in Nanjing, where first-round results carry over.

An inferior points differential meant a loss would’ve left Australia at the mercy of other results, even with wins over both the Dominican Republic on Saturday and France on Monday.

Instead they enter ahead of both Lithuania (2-1) and the Dominican Republic (2-1) on wins.

They could even sew up a quarter-final berth early with a victory on Saturday, providing France also beat Lithuania. 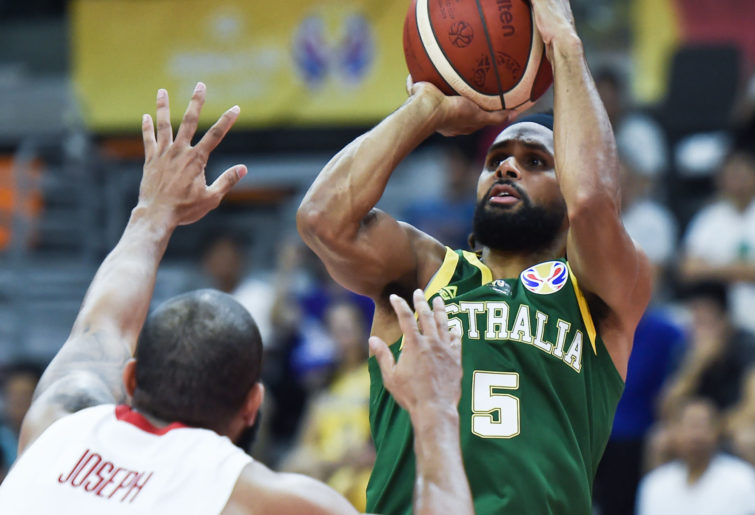 With that in mind, celebrations were muted on Thursday, Joe Ingles deflecting any suggestion that they had made a statement of sorts against a Lithuanian outfit that had dominated their first two games.

“That’s for you guys to write a cool little story about,” he said, adding he wasn’t surprised by Mills’ latest game-turning feats.

“We’re going to go into our locker room and prepare for the next game.

“But feeling good. They’re (Lithuania) a great team, got a lot of respect for them and I’m proud of our guys… it was a hell of a team effort.”

Australia, who have finished fourth in four Olympic Games and never made it beyond a World Cup quarter-final, have a clear-minded focus in China.

“Our goal is to win gold, that’s the goal we’ve set ourselves and as a group we’ve got a belief that’s something we can achieve,” Australian coach Andrej Lemanis said.

“We have a team that’s experienced enough to not get complacent, but the nature of the (World Cup) system forces you to come out and play.

“Even just advancing to the quarter-final, you’ve got to bring it.

“So I think that will be enough to avoid complacency.”

Australia had run hot to lead by 15 on Thursday night, but coughed up the advantage during a scoreless five-minute period to start the final quarter in Dongguan.

With Lithuania’s glued-on support base in full cry, Australia turned to Mills and the go-to guard had the answers.

“We trust in him and he trusts in himself,” Lemanis said of Mills.

“Coming down the stretch it was without question, ‘we need to get the ball to Patty’.”