The Eagles' uneven premiership defence ends without much fury

It ended, finally, with Nic Naitanui awkwardly spiralling a punt into the centre square and the waiting arms of an opponent.

It was fitting that West Coast’s final foray forward in the 2019 season finished like that – off balance and lacking, a figure of hope unable to make the intended impact.

There have been many worse premiership defences. The Eagles still won 15 games and a final. With a fortnight to go in the home-and-away season, they were second favourite for the flag.

Then it all came unstuck – in the second half against Richmond, the final quarter against Geelong and, most crucially, all night against Hawthorn.

The loss to the Hawks cast the Eagles’ fate. Not just in the standings, but on some deeper levels too.

It wasn’t so much that it cost the Eagles top four – it was that, in a must-win game, they’d lost by 38 points at home to a team that wasn’t going to play finals. It shouldn’t have happened, but it did, and it became clear that this wasn’t the same team as 2018.

For much of the year, things didn’t look too different. The Eagles still had their elite intercept markers creating a cruel web in defence, their clearance monsters in midfield, their two imposing key forwards and the army of skilled, pouncing crumbers at their feet.

But something was off – they looked almost as slick, but never as powerful. In the end, they went 1-5 against the top four – in all five losses they lost the contested possession count by at least 22. 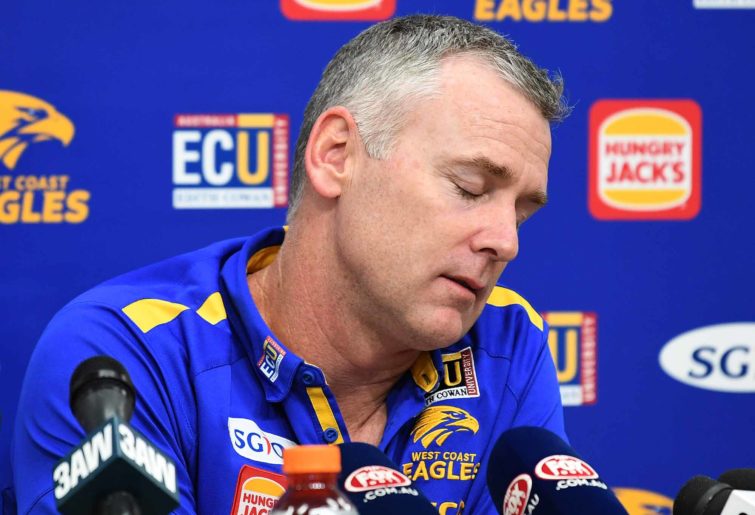 The Cats rattled them early on Friday night and broke them late. It was a familiar look this year – the first quarter of last year’s grand final recycled, where the Eagles couldn’t get their hands on the ball in the clinches, couldn’t establish any rhythm, and were made to look slow and disoriented.

This is a champion team, though, and they were never going to get blown out by a team with Geelong’s weaknesses. They arrested control through the second and third terms, playing the game as they do best – intercept marking parlayed into scything kicks into the corridor, setting up counter attacks where the speed comes in low trajectories through the air as much as pace on the ground.

Where last year the Eagles would have powered home, this year they just stopped. Geelong were harder in the contest, which could have been predicted, but also more disciplined and savvy in their structure, which was less foreseeable.

The West Coast defence is one of the strangest in the league – few high-profile back sixes oscillate as frequently between looking completely impenetrable and desperately vulnerable.

When there is pressure on the ball and it comes in high, Jeremy McGovern, Tom Barrass, Will Schofield and Shannon Hurn feast. When it comes in at pace, though, with those players isolated one on one, they can be made to look old and unathletic. The Cats took 17 marks inside 50, and that was the game.

Where the Eagles champions might have wrestled back control of a game like this last year, this year the cadences were off. Josh Kennedy is no longer a superstar – last Friday night his leap was compromised and his presence muted, as it had been for most of the year. McGovern looked eerily mortal. Andrew Gaff has looked joyless in his football, with none of the dynamism of last season, a lot of tough running leading to hurried 15-metre passes.

Gaff, Naitanui and Brad Sheppard were supposed to make this team even more unstoppable. But all year the Eagles looked more solvable than 2018, with opponents more able to take them out of their uncontested kick-mark artistry, and force them into more uncomfortable contested ground-level wars.

The absence of Willie Rioli hurt, and surely took its toll on Friday night, but West Coast’s defeat was the culmination of warning signs that had been blaring well before Rioli’s provisional suspension.

The Eagles aren’t going anywhere. Their core of superstars is still ripe enough and exciting youth is flowing through. This year ended meekly, but most premiership defences do. A reinvention propelled West Coast to a grand final in 2015 and a better reinvention earned them a premiership in 2018.

A third will be necessary to get them back to where they need to go.