The South Sydney Rabbitohs have kept their NRL season alive, winning a thrilling, high-scoring semi-final over the Manly Sea Eagles to book a trip to the nation’s capital next weekend. Here are my talking points from the match.

The refereeing was perfectly fine – if you have a problem, it’s with the rules
Regular readers of my work will know that I don’t love talking about the referees, but unfortunately, there were enough calls last night that received debate both ways for it to be a point.

You only have to look at our live blog, seeing it got over 650 comments, to know there were some calls which the wider masses weren’t seeing eye to eye on.

However, I’m not here to bag out the referees. That is simply not warranted.

The three sin bins were the main contentious points from the evening, but on each occasion, the referees and bunker ruled correctly.

In the case of Cody Walker, sure, he was retaliating to a mad bit of play from Jack Gosiewski where he pushed the head of a tackled Adam Doueihi into the ground, but open-palmed slaps have been banned, so he had to go. Gosiewski’s wasn’t technically a slap, so he stayed.

Again, bad look for the game when the instigator gets less of a penalty than the retaliatior, but they are the rules in this circumstance.

Then there was the sin-binning of Brad Parker, which was the clearest cut of the night. He had to go, sticking a leg out to get the better of James Roberts.

It absolutely wasn’t a penalty try given there were other Manly defenders in the vicinity, but Parker is looking at missing the opening week next year, given his prior tripping offence earlier this year.

The Jake Trbojevic incident may have been the most up in the air of the game after he was ruled to have pushed Dane Gagai over off the ball when he was running a support play for what could have been a Bunnies try.

But does that matter in the slightest? Absolutely not. The rules are black and white for a reason, and after years of “discretion,” they were changed due to outrage. You simply can’t have it both ways, and as they are written right now, Trbojevic had to go for a sit down.

Sure, the referees miss other blocking plays, other pushing plays and little bits of everything, but the semi-final in this instance was refereed well, and anyone claiming otherwise is on the sour grapes train.

This isn’t me agreeing with the rules either. I’m in the camp that some of these rules either need to be clarified or looked at and possibly changed.

But hanging abuse on the officials for following the book they are asked to follow is madness, and shows just how bad refsfault culture has become in the NRL.

It might just be time for fans to grow up and stop thinking the world is out to get their team in each and every game. 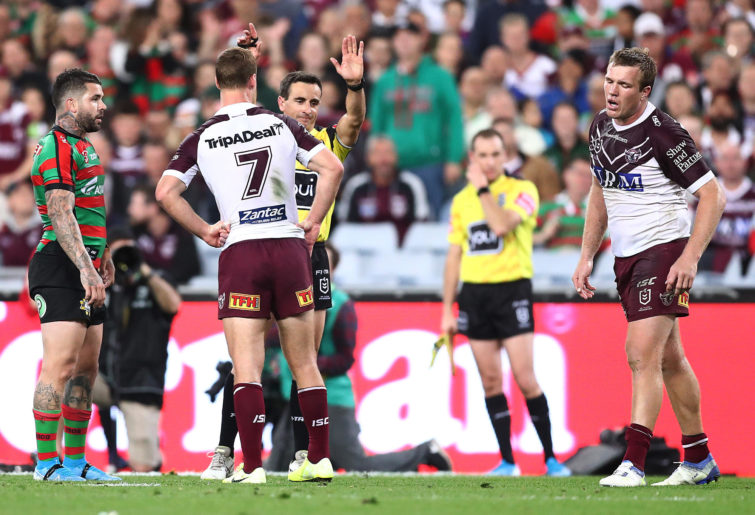 Souths must fix up their defence, or next week will be a bloodbath
This point was originally just going to be about the right edge of South Sydney, which was shredded multiple times during the first half, but it was so much more than that as the 80 minutes progressed.

While Adam Reynolds’ two missed tackles in the first half to allow tries to Brad Parker and Corey Waddell were in the same basket as inexcusable, their defence got worse the longer the game went on.

While the Sea Eagles were hardly poor in attack, they were their own worst enemy at times, dropping the footy, bombing tries and making life easy for the Rabbitohs whenever they needed possession and territory most, particularly during a woeful last 20 minutes of the contest.

The bottom line is that, if they come out next Friday night and defend like they did against Manly, the game will be over at halftime, so long as the Raiders are somewhere near their best.

And if the Raiders don’t get them, the Storm, Roosters or Eels will. You can not win a competition defending like Souths did last night.

Most of the time, 26 points will win you a game. It just so happened that Souths attack down the stretch was good enough to get them over the line, but they have a mountain of work to do, given the amount of points they have let in over the last two weeks.

The right edge, particularly now with likely injuries, is of particular concern, but it’s all over the park where Souths need an attitude and commitment check and change.

Manly should be more than happy with their season
When the 2019 season started, you would have been hard-pressed to find anyone who thought Manly were going to finish the year in the top eight with finals footy on the ticket at the end of the season.

If you had of offered most fans the chance to spend time in the top four, beat Melbourne in Melbourne, finish sixth and then beat the Cronulla Sharks will missing your best player in Week 1 of the finals before falling in a competitive, brilliant and entertaining semi-final, they would have bitten your hand off.

That’s the stark reality of 2019 for the Sea Eagles. They have overachieved and then some under the watchful eye and mentorship of Des Hasler.

This team with an unheralded pack of forwards behind two big names, and a backline with two stars but little else, have come good to a level no one was expecting.

They have caused upsets, turned themselves into a premiership dark horse, and then contender, and if it wasn’t for the crucial injury to Tom Trbojevic at the wrong time of year, it would have been intriguing to have seen where they ended up.

No one is suggesting they would have won the competition, but this is a club who have defied the odds all year long in what may be one of the best seasons for a club we have seen this century based on pre-season expectations.

They entered the year with a cold, hard and uncertain future ahead. By the end of 2019, Manly leave with a bright future, a new stable of rookies and one of the best coaches in the game. 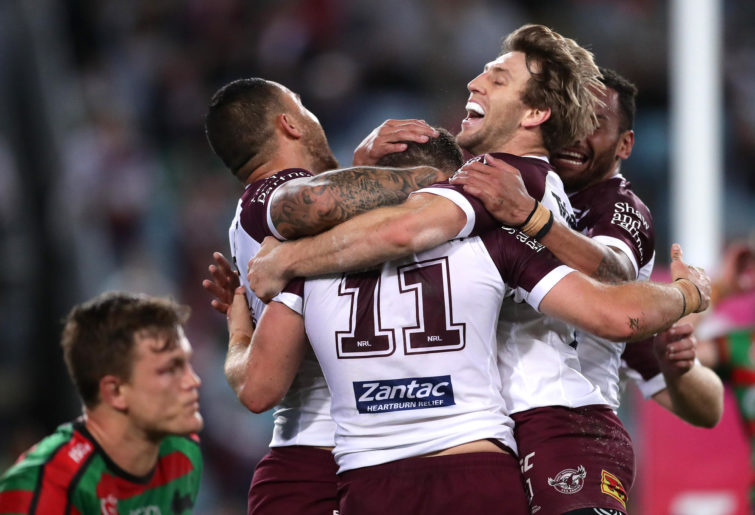 Cameron Murray is now the forward’s leader at the Rabbitohs
There is now no doubting who the man leading the Rabbitobs forward pack is – and it’s no longer Slammin’ Sam Burgess.

He might be fairly small in stature, but there is no one you’d rather be fighting behind than lock Cameron Murray.

There were plenty of questions in the pre-season about whether he was cut out to start in the middle and be an 80-minute forward, but while Burgess has been off fighting his own public battles at the judiciary, Murray has just been getting the job done.

He went to another level in the semi-final against Manly, and while his superman-style try will be what draws the attention, it’s all the little things he does, the things which won’t be shown on highlights packages which make Murray the player he is.

From his quick play the balls, to his smart thinking with the ball in hand and try-saving tackles in the middle third, all at a high-quality while playing big minutes, the breakout star is someone any club would love to have.

It’s no surprise he was handed a sky blue jumper this year, and it’s a jersey he will have for many years to come if he can hold similar form. 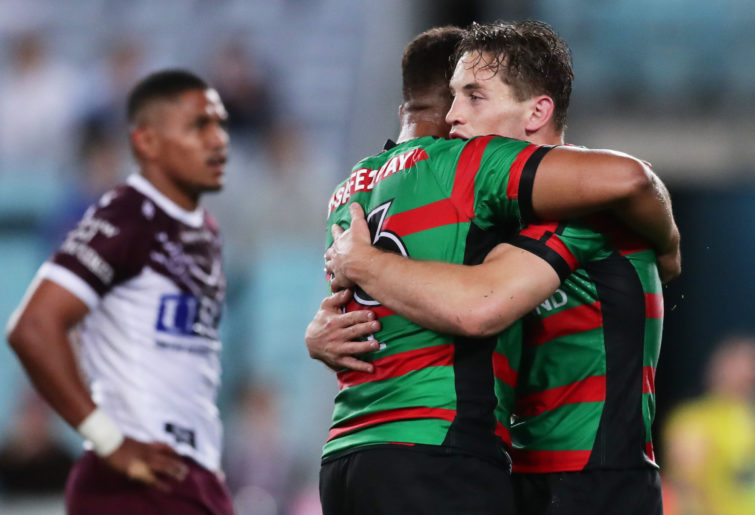 Can Moses Suli maintain his breakout form in 2020?
If there is one player who will have had nightmares overnight, it was Rabbitohs centre Dane Gagai.

Matched up against Moses Suli in the defensive job from hell, the in-form Sea Eagles centre trampled all over the Queensland and Australian representative to the point where Wayne Bennett was forced into a positional switch.

Heck, Suli was even able to slip over 50 metres from home in this semi-final and create a try out of nothing for Daly Cherry-Evans.

Suli is a player who has always had the potential to be among the best in his position, and the back end of 2019 has begun to show that potential.

It took a lot of guts from Manly to sign the youngster given the somewhat failed start to his career, but his speed, size and athleticism give him an edge few others have, and he is just starting to put that into practice.

At his best, Suli is incredibly hard to stop or run at, but there is still a lot between his best and worst games, and that’s something which must be fixed in 2020 if he wants to get to the top of the league.

Following the big Manly centre, who is clearly another success story for Des Hasler at this point, throughout next year could be one of the stories to watch, particularly as the club will now go in with expectations following their much better than expected 2019. 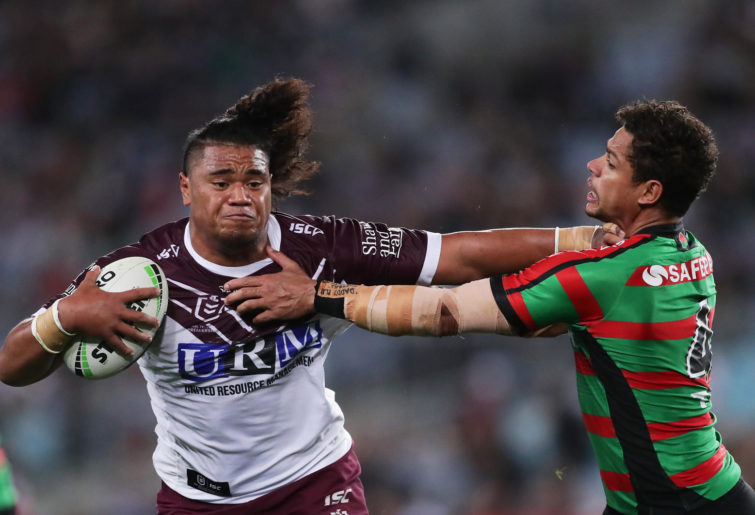 Adam Reynolds’ kicking game South Sydney’s only hope of a premiership
Just a quick one to finish off this game, and no I’m not talking about his goalkicking, which needs some improvement after last night.

But rather, the general play kicking of Reynolds is incredibly important to the Rabbitohs chances moving forward.

When he did it well for the Rabbitohs last night, he had a knack of putting them on the front foot, and from there, others could take over the game and the way South Sydney were playing.

He didn’t overplay his hand, pulled the strings nicely with a 40/20, try assist and a couple of forced drop outs, and has confirmed that, if the forwards do their job, Reynolds can, on most occasions, kick his side to victory, even in this cuthroat finals series.

Roarers, what were your thoughts on the game? Drop a comment below and let us know.