Rabbit raid? Why Wayne’s Bunnies are the perfect party poopers

Friday is a historic footy evening in our nation’s capital. It’s the biggest game of rugby league ever played in town, the most meaningful fixture at GIO Stadium.

There’ll be round about 28,000 people packed into the grandstands and the standing alleys will be shoulder to shoulder as the poor stadium ushers try fruitlessly to move people on.

Since the qualifying final win in Melbourne, the city of Canberra has been getting more and more worked up into a state of expectation, excitement and nerves. The green sausages in green bread are back, washed down with Raiders brand choc-mint-flavoured milk.

From all reports the town is humming with a Raiders fervour not seen since the glory days of the late 1980s and early ’90s – and well should it be.

When the Raiders are going well, the ACT gets buzzing. They love their local sporting teams but only one really gets the whole place truly up and about and that’s the Green Machine.

Even more than when the Brumbies, Capitals, Cavalry or any other local team start looking like winning something big, the Raiders get the capital pumping.

The fans on Friday night will be passionate, they will be incredibly loud and they’ll be engaged in the game.

They’ll also have high expectations of a grand final spot, coming up against a South Sydney side that was brutalised in Week 1, then lucky to escape last week for a variety of reasons.

The Rabbitohs are hardly busted up and staggering into Canberra, but they’ve had to play an extra match and after giving up 11 tries and 56 points in two finals games, they’ve not been at all convincing this series.

The whole scenario couldn’t be better set up for the men in green to advance to their first grand final since 1994.

And that’s what Wayne Bennett will use to have his side primed to cause the upset.

If ever you wanted to cultivate a classic ‘us versus them’ motivation, the master coach has had one handed to him on a platter, free of charge. He’s already got his players driving themselves to the game a day early, like they did before their 16-12 win at this venue in Round 10.

They’re a good team, South Sydney. They’ve got genuine superstars of the game in Damien Cook, Sam Burgess and Cameron Murray, a tried and tested halves combination of Adam Reynolds and Cody Walker, try-scoring threats all across the backline, and those two things Bennett loves the most – grit and grunt.

Tom and George Burgess will run with purpose. Former Raider Liam Knight has proven an astute pickup who makes metres and sticks tackles. These three have the ability to knock opposition forwards around. 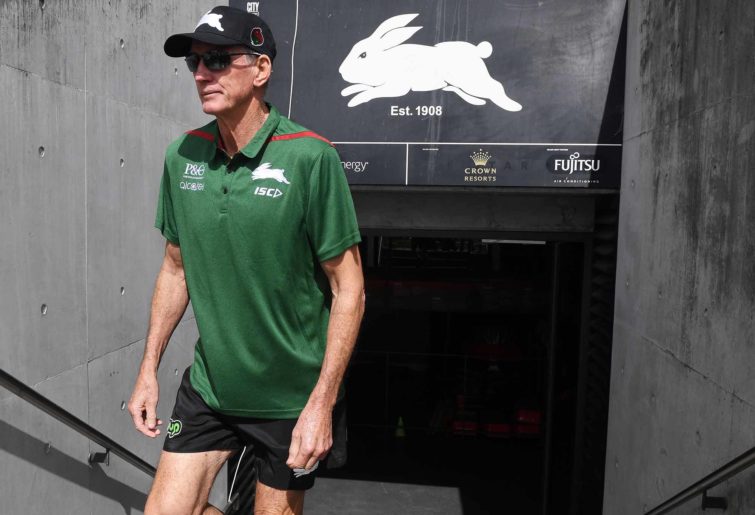 There’s plenty of signs to give cardinal and myrtle fans hope. Canberra’s journey to the top four wasn’t without its doubters. Until a Round 22 comeback win in Melbourne, the Raiders had lost all four games against top four sides. When the regular season was finished they’d also lost to Parramatta (fifth) and twice to Manly (sixth).

In fact, that famous win in Victoria, coming from 18 points down, was just Canberra’s second regular-season win against a team that finished in the top six. Against the top six sides they were 2-7, in addition to beating Parramatta in Round 5.

The Raiders have been very gettable at home in 2019, with six of their nine losses at Bruce. This included losses to the Warriors and Cowboys, teams you would expect to handle without too much trouble.

John Bateman of the Raiders scores a try. (Photo by Quinn Rooney/Getty Images)

Does this mean much now that we’re in finals? Yes and no. Ricky Stuart’s charges will have taken immeasurable levels of belief from the wins against the Storm. They absorbed everything the benchmark team had to offer and gave a little back of their own.

But it’s the two losses to Manly that may prove most instructive. Des Hasler’s men chipped away after falling behind early, tested the limits of referee tolerance and employed niggly, mouthy gamesmanship to get under Canberra’s skin. It worked at Brookvale (Raiders led 12-0) and it worked in Canberra (Raiders led 8-0).

Souths have the players to keep Canberra off balance and they have the quality to score points. It’s their defence and their discipline where they’ll be tested, but the 2019 Raiders have not been the freewheeling, heavy-scoring unit we’ve been used to of late.

The atmosphere during Friday night’s game will be phenomenal. There’s going to be pressure on the home team to come out blazing. If the Bunnies can’t get their defence set early, they’ll most likely be planning the end-of-season drinks during the halftime break.

But Bennett will have his side prepared for battle and desperate to take their season to the last game.

Facing up against one of the game’s best defences who are fit, firing and in front of their fanatical fans, it’s going to be bloody difficult. But Souths will embrace playing the role of the villain.