Nothing to lose: Why rugby has everything to gain from Toulouse at the World Cup

There is something special brewing down in the south of France, more specifically in the Haute-Garonne département.

French rugby, so long in the doldrums internationally, has a new spring in its stride, courtesy of the resurgence at club level of Stade Toulousain.

In its illustrious history, the Toulouse club has won more European Champions Cup gold medals (four) than anyone bar Irish province Leinster, but their decline has mirrored that of the French national team too exactly for comfort.

Toulouse’s most recent European triumph was in 2010, the same year in which France last won the Six Nations tournament. Coincidence? Probably not.

A vital element of the traditionally cavalier Toulousain approach, characterised by throwing caution to the wind and keeping the ball alive from impossibly deep positions, has always stirred the French rugby soul at the deepest level. Les Blues attack from the end of the world, and their supporters roar with pride.

Now the famous rouges et noirs are back with a vengeance, and the medieval pilgrimage route of Saint Jacques de Compstelle has become more than a historical curiosity to ardent rugby followers. It is the French rugby selectors who are now beating a path to the Stade Ernest-Wallon to marvel at some of the most vibrant young talents in the French game.

Toulouse won the domestic Top 14 league title in 2018-19 and reached the semi-finals of the European Champions Cup. The Leinster team who beat them at the knockout stage had already played them twice previously in their pool – losing away in France and winning the return in Dublin.

Toulouse was rated the most dangerous attacking side on Leinster’s schedule, and their threat drew the two most complete European performances out of the capital province in the Cup last year.

As Ireland centre Garry Ringrose said before the semi-final:

“There’s a lot of excitement around this match. We saw in the pool phase that Toulouse are a very difficult team to beat.

“They have a lot of experience in this competition and are dangerous in all positions. All the team are playing well, but we have to keep an eye out for [Cheslin] Kolbe, who has scored some incredible tries this season.”

Toulouse’s success has been sparked by the presence of two ex-All Black forwards up front in the shape of Jerome Kaino and Charlie Faumuina, and by a new generation of fearless young backs behind them.

Les rouges et noirs often play with a mix of halfbacks and back three players, and without conventional centres at all in midfield. Natural halves like Antoine Dupont and Sebastien Bezy at 9, and Zack Holmes and Romain Ntamack at 10 and 12, provide the bullets. Fullbacks and wingers like Sofiane Giutoune (who is pressed into number 13), Maxime Medard, Yoann Huget, Thomas Ramos and Kolbe then fire the ammunition.

That mix of distributors and highly skilled offloaders and line-breakers, with almost nothing in between, makes Toulouse extraordinarily hard to defend on turnover plays. They can shift the ball wide quickly and are lethal finishers in the 15-5 metre zones.

The opening Pool C game between France and Argentina gave a couple of early glimpses of the capabilities of the Toulouse backs. All of Dupont, Ntamack, Medard, Huget and Ramos were selected in the match-day squad:

Clermont’s Damien Penaud makes the break, but it is two beautifully weighted passes off the left hand by Ntamack and Medard, spanning the better part of 40 metres, which get the ball to him in a positive space out on the right.

In fact, there is very little choice but to move the ball wide, because none of the French forwards are showing much animation or urgency in the process of regrouping into their pods. There is a collective, and very Gallic, shrug of the shoulders which means that all the hard work will be left to Ntamack and Medard! 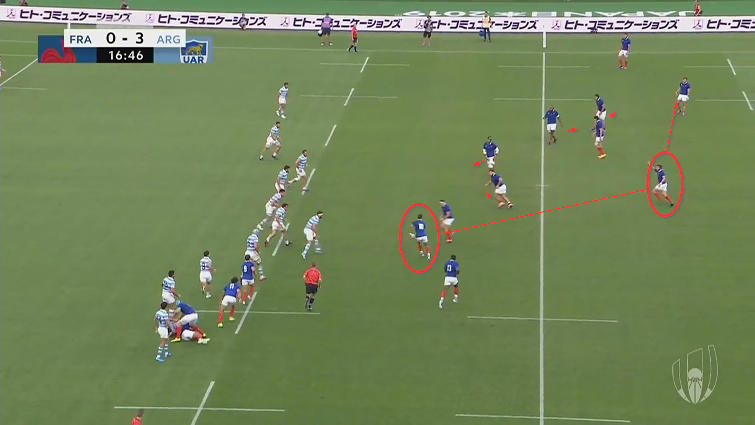 At the end of Penaud’s run, it is Medard and Dupont who are first up in support, because that is the attacking behaviour instilled at their club.

France were able to convert the opportunity a couple of phases later, via a mazy run by another winger playing at 13 in the Toulousain style, Virimi Vakatawa:

France’s second try in the 22nd minute was keyed by the involvement of the same three key players, with Medard making two terrific all-in-one transfers off his left hand, Vakatawa contributing an important offload, and Dupont on hand to finish the move:

As Garry Ringrose’s comments suggest, one player to whom Leinster paid special attention in the European games was Cheslin Kolbe, and he is a perfect fit for Toulouse’s ‘small man’ counter-attack philosophy.

Kolbe was selected on the Springbok right wing in the crunch group game against New Zealand. Despite his Shane Williams-like stature – he is listed at 5’7” and only 80 kilos – Kolbe is a not a defensive weakness, and this was perhaps the only aspect of the All Blacks’ preparation against South Africa which proved to be ineffective on the day.

While their attacks directed down Makazole Mapimpi’s left wing paid spectacular dividends, the probes against Kolbe ultimately only created chances for the Springboks.

New Zealand tested the diminutive winger under the high ball from their first attacking lineout:

All the while, they underestimated his ability to chase high kicks put up by the Springbok halves:

As we discovered in Europe with Leinster, Kolbe is also a terrier in defence, and attacks down his side have to be very carefully managed:

Kolbe first jags in off the right edge to snare Sam Cane and force the ball loose, then he collars Beauden Barrett in the follow-up, before wrapping up Sevu Reece. Three decisive actions, all accomplished in the space of six or seven seconds.

It is Kolbe’s ability with ball in hand which is so stupendous to witness, particularly for the local crowds in Japan. As a rugby nation which cannot produce physical specimens to compete with the likes of South Africa and New Zealand, it must be truly appreciative of the unique small-man skills displayed by Kolbe.

The All Blacks spun the roulette wheel of the kicking game once too often early in the second period:

Kolbe beats George Bridge to the ball before seeing off two other chasers in the follow-up.

A special mention should be made at this point about the excellence of the All Blacks’ scramble defence: Beauden Barrett does all of the running necessary to close off the infield option for Kolbe, which means Richie Mo’unga is left with only one side of the pitch to defend – a task he achieves with outstanding accuracy. If Mo’unga had been left one-on-one without support, it would have been a certain seven-pointer for the Bokke.

The lack of intelligence of a South African attack which did not once feature Kolbe as the spearhead from set plays will remain a mystery known only to their coaches.

Kolbe is a rapier in this area too – just watch this first try:

When Kolbe wanted the ball, he had to go and get it directly from the South African scrumhalf:

Cheslin Kolbe has to virtually pry the ball out of Jesse Kriel’s hands before setting off on another explosive run downfield. For South Africa, it is really a case of what might have been – and they will know that they have only themselves to blame.

Summary
The biggest positive underswell in French rugby for many a year is underpinned by the revival of the Toulouse club. Their results in the 2018-19 season indicate they are at the point of regaining former glories, and French fortunes at the national level may well mirror that upswing.

Toulouse have ex-All Blacks in Kaino and Faumuina up front and they now have the twin towers (Rory and Richie Arnold) in the second row. They have a new generation of adventurers in the backline – from Sebastien Bezy and Antoine Dupont at 9, to Romain Ntamack at 10 or 12, and a clutch of high-class performers from 13 outwards: Sofiane Guitoune, Yoann Huget, Maxime Medard, Thomas Ramos and Lucas Tauzin.

Above all they have Cheslin Kolbe, who is picking up the fluttering standard of the small man temporarily set down by Shane Williams in the modern era. Kolbe can handle the physical and aerial tasks, but he offers so much more besides – so many positives which are a direct result of his diminutive stature. 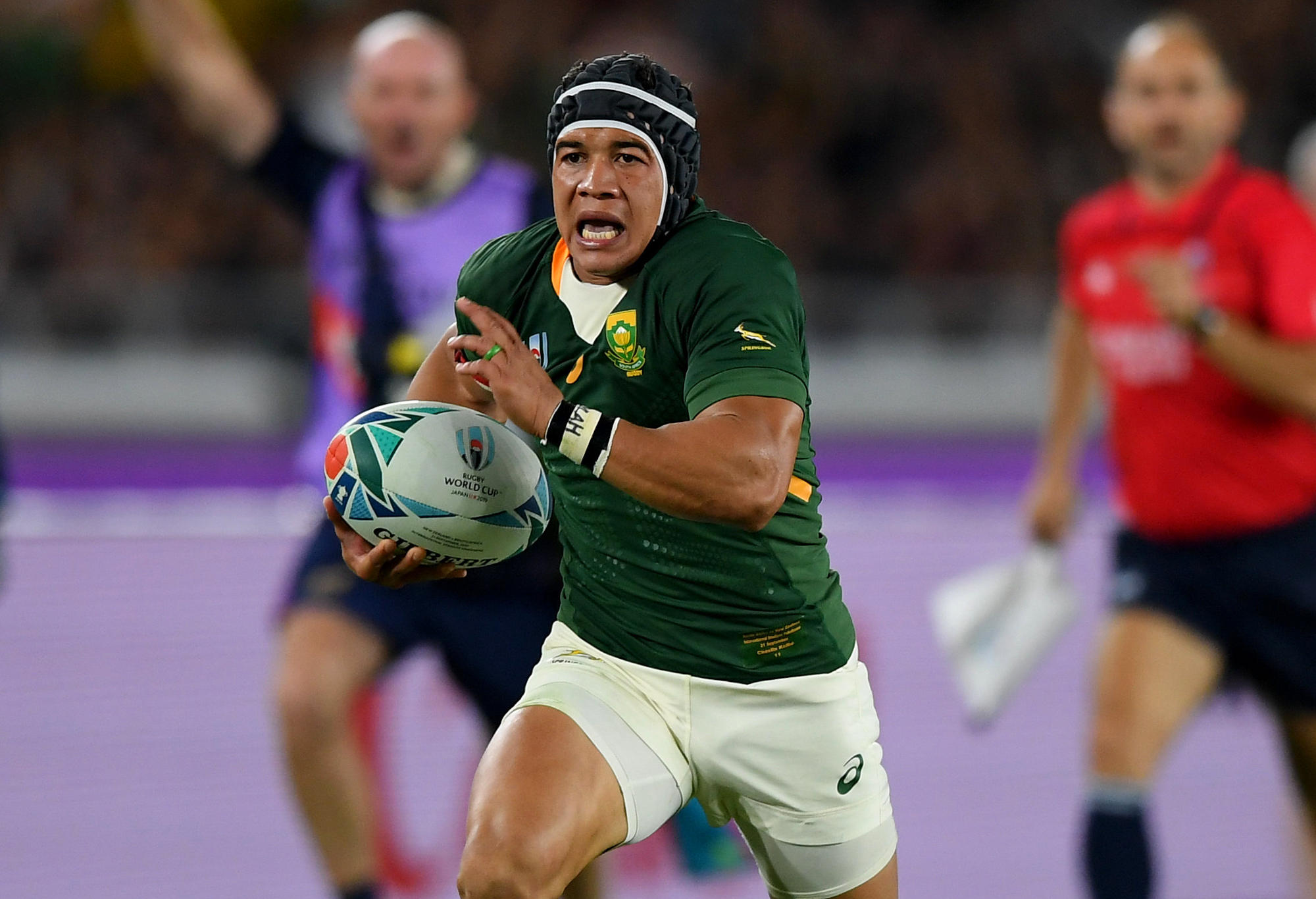 Kolbe is the one Springbok back who, on the evidence of the weekend, would walk into the starting All Blacks backline. If the Springboks are to progress to the final stages of the competition, they will have to find more ways to utilise his range of attacking skills, and quickly.

They will not overcome Ireland in a likely quarter-final with a performance like they displayed Yokohama – not a chance.

The wider rugby audience can meanwhile enjoy the skills that Stade Toulousain players are showcasing on the world stage. A strong Toulouse means a strong France, and a strong France means a better game globally.

Maybe it is time for the pilgrimage to begin again, and lend it a modern flavour. Let’s whisper the names together, like rosary beads: Arles, Saint-Guilhem, Toulouse, Pampelune, Logrono, Burgos, Saint Jacques de Compstelle.