On Thursday, June 13 2019, the Richmond Tigers walked off Adelaide Oval at full time on the receiving end of a 33-point loss to the Crows.

It was the Tigers’ third successive loss and they headed into the bye weekend with a cloud above their heads.

They lost those games by 37, 67 and 33 points respectively. They sat ninth on the ladder with a percentage of 92.0.

Many were questioning what happened to the Tigers. Were they coming back? Were they even going to make the eight?

Well, they didn’t lose another game for the season. And 107 days later, they’ve won the 2019 AFL premiership.

The Tigers flexed their muscles in the second half of the season. A host of stars returned from injury. Superstar midfielder Dustin Martin rediscovered his best form. They worked past everyone who stood in their way, including 2018 premiers West Coast and 2019 bolters the Brisbane Lions.

It was an inspiring run home from the yellow and black and it finished with a bang, unlike the tale of 2018.

We know the narrative. Richmond lost its first game at the MCG for 2018 in the preliminary final against Collingwood.

A week later, Collingwood lost the grand final at their home ground against West Coast.

What a difference a year can make.

Last year, the Tigers led from the front all year.

The team to beat from Round 1 fell at the second last hurdle as the dream of a back-to-back premiership dream faded.

In 2019, they returned bigger and more well rounded than ever and on the last Saturday in September, they crushed GWS at the final hurdle and were premiers once again.

And what a demolition job it was.

But for the Giants, that’s where the celebrations started and ended.

It was all yellow and black for the remaining three and a bit quarters, led strongly by veteran Jack Riewoldt and now two-time Norm Smith Medallist Dustin Martin.

Dusty was a class above the rest. He put in another memorable performance. 22 touches at 88 per cent disposal efficiency, three clearances, eight score involvements and four goals.

But for Dusty, it was never about was he could do on the day.

It was always about working as a team with his 21 teammates and securing Richmond’s 12th premiership.

Dustin Martin: "We don't really care who gets the touches or kicks the goals."#AFLGF pic.twitter.com/mR2ZqHen3r

His teammates rose with him to the occasion.

Yes, Jack Riewoldt was exceptional, as were Bachar Houli and Dion Prestia.

But it was such an even performance from everyone on the field.

No Richmond player had more than 26 touches.

Four of the top five possession winners on the ground were Giants players.

There was, however, one special performance that stood out and that will be talked about for years and years to come.

The game of debutant Marlion Pickett. 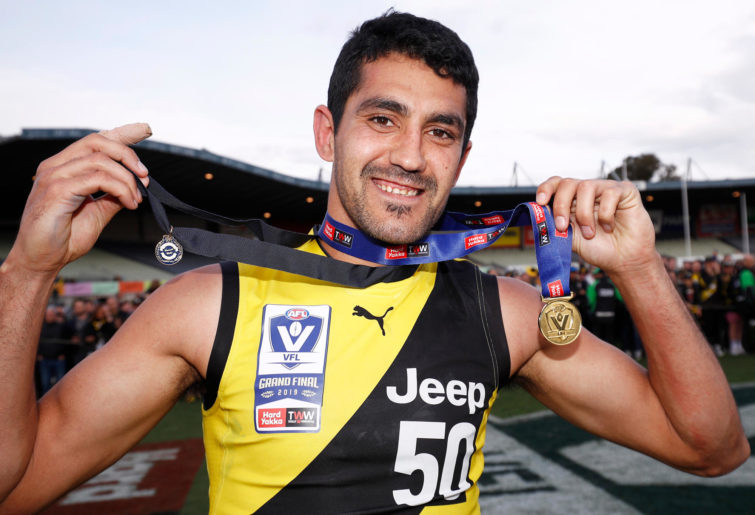 Richmond coach Damien Hardwick told Channel Seven postgame that he didn’t sleep on Friday night, with the decision to debut Pickett playing on his mind.

But very early on, Pickett proved he was the perfect player for the moment.

He was calm and unfazed but his debut on the biggest stage in the game.

22 touches, 559 metres gained, three clearances, eight inside 50s and one mighty goal that brought the house down.

He came third in the Norm Smith Medal votes.

It was a spectacular season from the Tigers, but it didn’t come without its challenges.

In fact, many had written off the Tigers as early as Round 1.

The Tigers lost Alex Rance midway through the season opener against Carlton.

He did his ACL and appeared done for the year.

While there were moments throughout the year where he teased a miraculous return, but in the first week of August he told Tiger teammates that he was ruling himself out for the year.

“I wasn’t willing to risk…the game-day emotional toll that a re-injury could have taken,” Rance explained in a video published on the club’s website.

“If I came back in a final and ruptured my knee and that cost us that game, then I would never be able to forgive myself. That’s something that I couldn’t really live with.”

How were they ever going to replace him? How could they win a flag without Rance?

For me, he’s been Richmond’s hero this season.

He has done more than just stepping into Rance’s place. Grimes has been simply magical.

Despite the mammoth task in front of him, he rose to the challenge and had the best season of his career.

He credited his 2019 rise and success to the ‘vulnerability movement’; the works of best selling US author professor Brené Brown.

It inspired him to open up to his teammates about the challenges he was facing in trying to replace Rance down back, embrace them and work on them.

“I was struggling with the challenges I was facing, and I had all-new respect for the work that Rancey had done because, up until that point, I sort of knew what his role was, but I didn’t realise how challenging it was,” he told the ABC earlier this month.

“It sounds simple, but in an environment where you’re so heavily scrutinised and the spotlight is really on you, to have the courage to really embrace who you are and the imperfections of who you are is a challenge.” 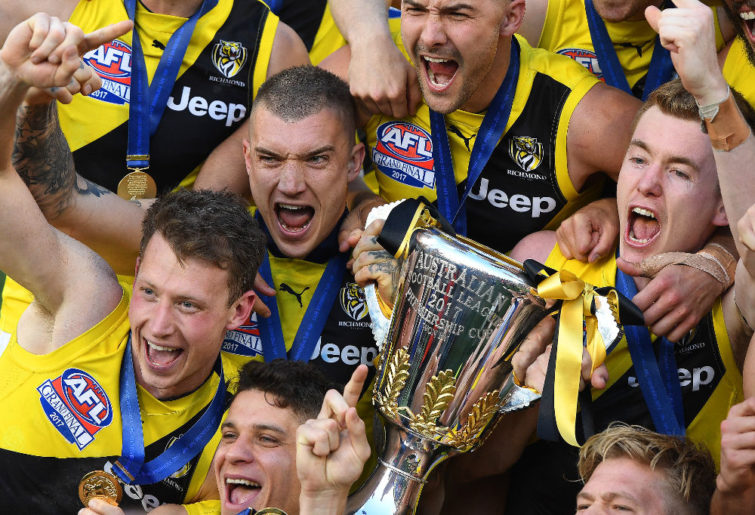 And he wasn’t the only Tiger opening up.

In days leading up to the 2019 home-and-away season, Dusty Martin also opened up about his mental health struggles.

It seems wide-open discussion at Richmond is bringing the club closer and closer together.

Is that the way they have overcome countless challenges this year?

From overcoming a preliminary finals loss this time last year to staring at a potential out of the eight halfway through this year, things have certainly been turned around time and time again at Tigerland.

Within the club’s inner sanctum, they’ve talked the talk. Confided in each other when they’ve needed a shoulder to lean on. They have opened the doors to vulnerability and used their weaknesses as a tool to rise above the rest.

On the field, they have shown resilience. They have rebounded and given one hell of a fight.

And the Yellow and Black army are premiers once again.