Waking up and nervously opening the blinds in Tokyo last Sunday morning, it was a struggle to reconcile the brilliant sunlight and stillness to the passing of Typhoon Hagibis only hours before.

Relief was palpable – Hagibis seemingly not as destructive as predictions suggested it might have been, and the highly anticipated Pool A decider between Japan and Scotland confirmed to go ahead.

Respect to those affected was duly paid – before and after the match – and the combined effect of euphoria accompanying Japan’s historic victory, and the build-up for the quarter-finals this weekend meant that, understandably, the rugby world had quickly moved along.

Over a cup of tea yesterday, it took the front page of the Japan News to apply the handbrake to weighing up team selections. Somehow during the week, the death toll from Hagibis had snuck up to 78, with 16 people still missing, and many thousands more homeless with little immediate prospect of a return to whatever might be left of their houses.

There can be no doubt that World Cup organisers handled the aftermath of the Typhoon humanely and professionally, ensuring that they consulted carefully with local authorities concerning sensitivities about how best to proceed with the tournament.

And it would be silly to suggest that tens of thousands of visiting fans should scale back their excitement at attending a World Cup, or refrain from revelry out of a sense of guilt at the outcome of a natural disaster beyond their control.

But there is much to be said for hastening slowly. To ensure that the correct balance is maintained, right through to the end of the tournament and beyond, to make certain that everyone’s rugby interests, no matter the importance of the World Cup, are kept in perspective.

Hastening more slowly might have proved a worthwhile strategy for two Uruguayan players who, following their final match against Wales last weekend, momentarily thought they were in Bali on an end of rugby league season trip – a disappointing coda to what has been a successful tournament for the South Americans.

In addition to pushing a security guard to the ground, the players also allegedly spilled drinks on DJ equipment, punched walls and mirrors and tore apart a stuffed bear. Initially unclear if this was a storm in a teacup or if the story had any paws, it was duly confirmed that the unfortunate teddy is no longer stuffed. Which is another way of saying that it’s completely stuffed.

Japan’s famous victory might have stolen the limelight, but it was the end of the Tonga v USA match from Osaka that provided comic relief. With time virtually up, and Tonga enjoying a hard fought five-point lead, they were awarded a penalty, close enough to the posts to, well, throw a teddy bear over.

But why take a guaranteed eight-point win when you can roll the dice, take the scrum, and risk losing the match to try and win it by twelve?

The reaction of Tongan coach Toutai Kefu was admirably understated; “What idiot made that decision?” But the players knew best, a neat little grubber not only delivering the bonus try but providing a final opportunity for referee Nigel Owens to fill the camera, checking that the try-scorer, Telusa Veainu, was on-side.

Vision from the main match camera seemed straightforward enough, but a skeptical Owens called for more evidence from the side-on, ground-level camera. It didn’t prove to be helpful.

“We’ve got a man in front of us now, blocking the view”, Owens said, disappointed.

“It’s you”, replied his TMO, without a hint of irony.

Both captains and coaches spoke of their privilege to have been involved in such a great event, a theme repeated over and over by players, coaches and visitors to the cup. But there was an added kicker to the comments of USA coach Gary Gold, who didn’t waste the opportunity to spruik the USA as hosts for 2027, citing the hosting of Japan as evidence of what a World Cup can do to accelerate interest and progress of the sport in a developing nation.

A compelling argument, well made.

Incongruity around World Rugby’s determination to minimise the risk and occurrence of concussion by cracking down on high contact in the tackle was again to the fore in Sunday night’s blockbuster, after Scotland’s Jonny Gray and Japan’s Shota Horie clashed heads in the first half – with enough force for cameras to capture Horie grimacing as he slid to the ground.

After a TMO review, referee Ben O’Keeffe determined the contact to be accidental and play continued, albeit after treatment provided on the pitch to Horie. But with so much focus on the issue of contact to the head, it was astonishing that neither player was required to leave the field to undergo a Head Injury Assessment.

The players may well have been okay – both were among their side’s best on the night. But who decided that, and how?

World Rugby’s motives are pure, yet here they are tying themselves and fans in knots over tackle interpretations at the same time as they are missing the low hanging fruit.

By coincidence, Horie featured in a viral video a few days later, taking another high shot in a game of Roshambo with his coach, Jamie Joseph. A hilarious adaptation of ‘rock, paper, scissors’, the winner gets to grab a mallet and whack the loser on the head with it, before they have time to don a protective helmet.

Perhaps if Ben Skeen had been around, he might have ruled that because the mallet was made of plastic, there were enough mitigating factors to keep the cards in the referee’s pocket.

In light of calls for the French team to mutiny I don’t imagine French coach, Jacques Brunel, will agree to take his players on in a game of Roshambo any time soon – lest the plastic mallet be surreptitiously switched for a metal one! 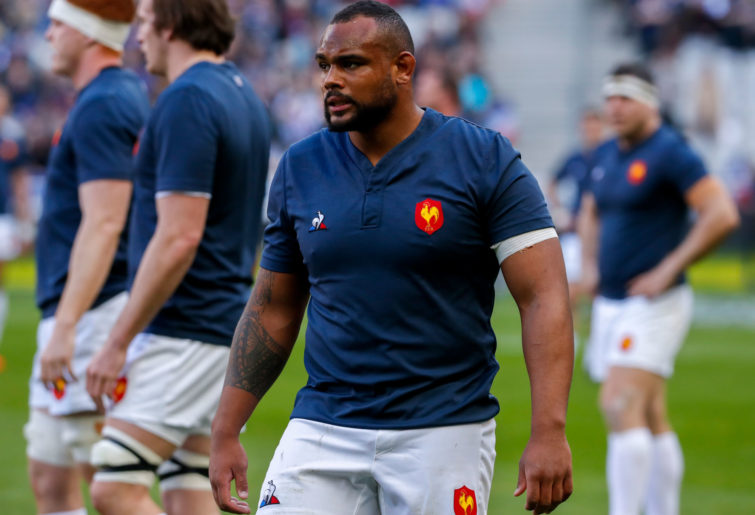 All is not well in the French camp. (Photo by Catherine Steenkeste/Getty Images)

It wouldn’t be a World Cup without a decent north versus south stoush, which new New Zealand Rugby CEO Brett Impey seemed happy to fuel when he criticised northern hemisphere unions with respect to their treatment of Pacific Islands rugby.

After World Rugby slapped a charge on Scotland for their untimely and unseemly comments prior to Hagibis, the Scots are in need of some delicate, sweet-stepping talking right now. They could do worse than hire Impey to lead their defence.

That said, it’s hard to see what Impey gains from raising the issue in this way. While he was speaking directly to a point about the benefits of availability of players like Charles Piatau and Steven Luatua for their respective Pacific Island nations after they finished their All Blacks careers, he only opens himself up to accusations of hypocrisy with respect to New Zealand’s own rugby relationship with the islands – a sole Test match in Apia in 2015 not the hook to hang one’s colonial hat on.

Also given the hook were England’s George Ford and Australia’s James O’Connor as discussion about selection changes dominated the lead-in to the weekend’s quarter-finals.

With every one of us an expert right about now, it’s worth remembering that the coaches and their assistants, who live among their players and know intimately, their every flaw and foible, and know what their own tactical objectives are, are far better placed than anyone else to put their best teams on the park.

But not all coaches are equal. Win, lose or draw tonight, Michael Cheika’s halves selection makes a mockery of having four years to prepare a side to win a World Cup, when you’re still winging it, two days out from the quarter-final.

Fair enough perhaps if changing the halves combination for the eighth time in the last nine Tests is designed to keep England guessing. But there are advantages to be gained too from not keeping your own players guessing so much, and letting them build genuine, Test-match durable, combinations.

Another eyebrow raiser was Eddie Jones bringing in Canberra Raiders coach, and dual rugby/rugby league international Ricky Stuart into his camp this week. When a tight call goes against England – let’s say Owen Farrell develops a twitch in his shoulder – keep a close eye on those white plastic chairs near the sideline.

A highlight this week was to share a couple of hours over dinner and a beer with David Walsh, chief sportswriter for the British newspaper The Sunday Times. Walsh, an Irishman, has a sharp rugby brain and by the time we bade each other farewell, we’d solved nearly all of rugby’s pressing problems, mapped out the future for Joe Schmidt and pondered if Jordan Petaia’s mum, Helen, had infiltrated Michael Cheika’s inner sanctum, to ensure that her son wasn’t being led down the wrong path.

It was Walsh who broke the news to a stunned Irish public that their 1996 Olympic swimming hero, triple gold medallist Michelle Smith, was a drug cheat. But the crowning glory of Walsh’s career to date was his pursuit, and ultimate takedown, of cyclist Lance Armstrong – documented in two books, LA Confidential (2004) and Seven Deadly Sins (2012).

Walsh first met Armstrong in 1993, only becoming suspicious of his performance enhancing drug-taking activities in 1999. Despite he and his newspaper losing a multi-million-dollar libel judgement to Armstrong along the way, Walsh continued in his quest, and was finally vindicated in 2012, when the United States Anti-Doping Agency (USADA) banned Armstrong from cycling for life, for doping offences.

Despite a willing urge over thirteen years to bring the truth to the public eye, Walsh’s story is a lesson in hastening slowly – patiently and methodically gathering information and building a watertight case, protecting sources, and pushing through the enmity thrown at him by the all-powerful Armstrong, other competitors, team managers and fellow journalists.

Cycling, athletics and other Olympic sports are in a constant battle to keep their sports clean and free of doping cheats. Meanwhile, who are the villians of this rugby World Cup?

Nothing like a deadly Typhoon and the world’s most infamous doping cheat to provide a little perspective.