At the time of writing this column, there were upwards of 250 bushfires burning to some level of advice and to some degree of containment around Australia.

Almost one hundred of those were in New South Wales, and some of them have been or continue to be very nasty. Queensland and South Australia each accounted for another forty or so. Property loss has been extensive.

Remarkably, the only state or territory with no active fires burning at the time was the Australian Capital Territory, though that could change very quickly.

‘Unprecedented’ is a word that has been used with monotonous regularity already this Australian summer, and we still haven’t really reached the halfway point of the season. We certainly haven’t reached the hottest part of the summer yet.

And the genuine fear is that it will get a lot worse before it gets better. What Australia wouldn’t give for even just a week’s gentle, never mind solid, rainfall right now.

That’s a rather morbid and sombre way to start a cricket column, I’ll concede, but the events of Saturday night at Manuka Oval in Canberra showed that cricket can and often is affected by bushfires. And even in places where there are no fires burning at the time.

Readers outside Australia may or may not be aware: on Saturday night, the Big Bash League game between the Sydney Thunder and Adelaide Strikers being played at Manuka Oval had to be abandoned 4.2 overs in to the run-chase, after thick, eerie smoke engulfed the National Capital.

The smoke blew in from a number of bushfires burning in south-eastern NSW, including favoured holiday destination, the South Coast. The closest of these fires is more than a hundred kilometres to the east of Canberra, but the switching easterly and westerly winds in the region has been blowing smoke into, out of, and back into the ACT for more than a week.

On Saturday night, the smoke blew through with incredible speed. In less than ten minutes, and overlapping the final two deliveries of the fourth over and the first two deliveries and a wide in the fifth over, the ground went from clear to completely smoked out.

This looks ominous to the east… #BBL09 pic.twitter.com/pkULWWofiR

There have been a number of bad days of smoke in Canberra in the past week, but Saturday night’s was the hottest and thickest. My eyes have been stinging at some point every day.

It’s uncomfortable, but there are a lot of people in this part of Australia in situations significantly worse.

Yet, when it arrived on Saturday night, everyone at the ground just knew there was no way the game could continue.

There was a bit of ill-thought commentary that “if you start an over, surely you finish it”, a standard that almost never applies in times of rain.

And while the Thunder made the decent point that had the fifth over been completed, then the match could have been declared a result and everyone could just go home and get out of the smoke, rather than hang around in it for another hour like some hardy but crazy-optimistic souls did, they were quick to concede the right decision was made to split the points. 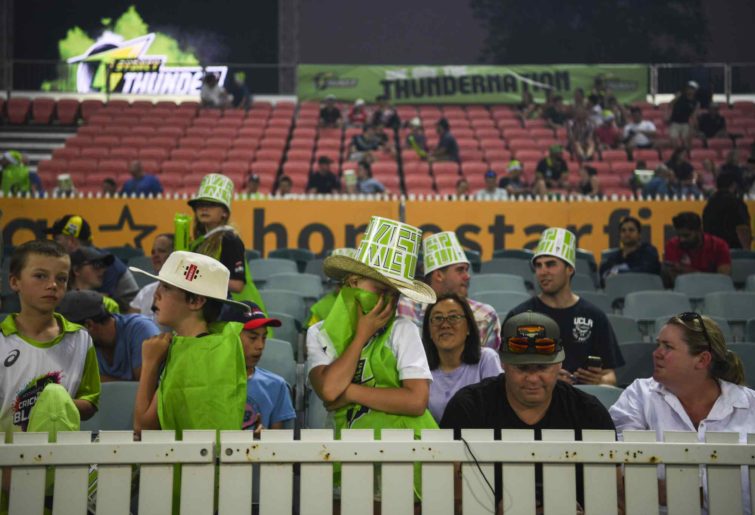 “You’ve got to stop to take a breath and say, ‘Look, losing a point is not the same as losing your house’. There’s some perspective there and there’s some people doing it tough, so we were pleased we were able to put on a good show for the people of our region, and hope that they’re doing OK,” Thunder head coach Shane Bond said in the post-match.

His Adelaide counterpart Jason Gillespie had earlier echoed a very similar sentiment: “Look, at the end of the day, we’ve got player safety we have to take into account. It’s pretty unprecedented, really… and not just the players and umpires and the like, but we’ve got a lot of spectators as well,” he told Fox Sports, just prior to the ‘no result’ being confirmed.

Yet with all this common sense floating around amidst all the smoke and who knows what else was in the air, I couldn’t help but think back to the crazy images of playing continuing in very similar conditions during the NSW-Queensland Sheffield Shield game in Sydney a fortnight ago.

If the umpires could see the conditions weren’t healthy in Canberra on Saturday night, why on earth wasn’t the same conclusion reached at the SCG?

Similarly, it’s worrying that Cricket Australia hasn’t had a smoke policy that it is now hurriedly formulating, given that bushfires around major population bases at the time of year cricket is played is not a new phenomenon.

But that’s neither here nor there, right now. With BBL games to be played in Adelaide, Sydney and Brisbane in the next week and bit, the Sydney Test in the New Year, and another BBL game in Canberra in mid-January, Saturday night’s suspension and eventual abandonment of play has now set the logical precedent that can at least form the benchmark for the rest of the summer.

Because the really worrying thing is this might not be the last time bushfire smoke stops play.

And when it does happen, cricket suddenly seems far less important.