Amid an era of Liverpool signing Southampton players, I didn’t ponder much over the acquisition of Sadio Mane prior to the 2016-17 campaign.

Sure, I’d seen the Senegalese international blitz the Reds with a brace off the bench the season before. I also knew he held the record for the fastest ever Premier League hat trick, spending a mere 176 seconds to achieve the feat against Aston Villa in 2015.

None of this was enough to convince me that I ought to be particularly excited about his arrival, though. His goal tallies were hardly worth remembering and I had already stereotyped him into a carbon copy, dime-a-dozen winger.

What did I know?

Thankfully, it didn’t matter what I did or didn’t know. What mattered was the keen eye Liverpool had on the former Red Bull Salzburg man and their reasons for it. Sadio Mane was more than a winger or even just a standard striker. His dynamism in the final third made him a multifaceted attacker.

Even now, going back and watching some old footage of him at Southampton, I can see glimpses of the near Ballon d’Or-level recognition Sadio Mane has rightfully received – his dribbles inside and out from the right flank, intelligent movement into openings and lethal finishing on either side.

It’s that dynamic ability in the final third that makes him a vital cog in the Liverpool machine. The world-feared front trio of Sadio Mane, Roberto Firmino and Mohamed Salah all possess a level of flexibility that enables Jurgen Klopp to alternate their positions and roles on the go.

If Roberto Firmino is considered selfless in front of goal and Mohamed Salah the opposite, then Sadio Mane is perhaps the perfect mix of both.

In fact, there’s a belief among Liverpool supporters that Sadio Mane is the main man in attack at Anfield. 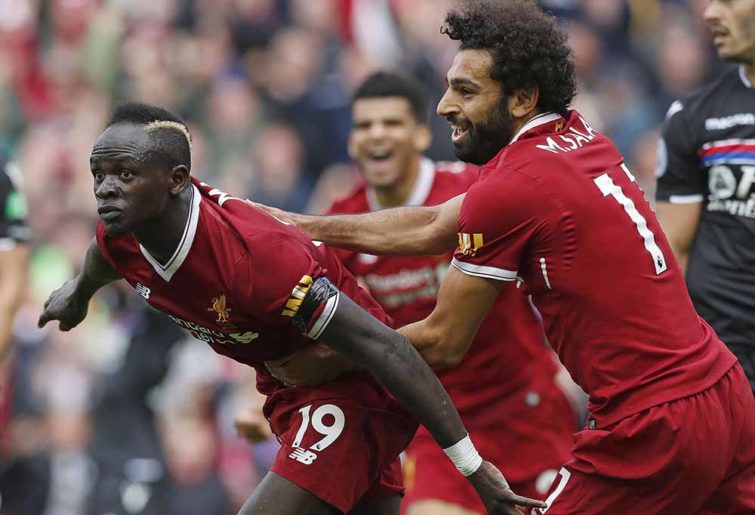 Such claims can be substantiated with more than sufficient evidence. Mane is now a joint Premier League Golden Boot winner and finished fourth in the Ballon d’Or last season – the highest a Liverpool forward has finished since Fernando Torres managed third in 2008.

Sadio Mane’s prolific abilities are complemented by the importance of his goals. He scored in every knockout phase of Liverpool’s Champions League campaign in 2017-18 – including an equaliser against Real Madrid in the final – and propelled the Reds to their second trophy under Jurgen Klopp with a slick double in the UEFA Super Cup against Chelsea in August 2019.

Additionally, he’s one of the most dangerous dribblers Liverpool have seen this decade. There are arguments that can be made in favour of others, such as Philippe Coutinho, Mohamed Salah and Luis Suarez, but the range of qualities Mane has on the ball justifies his place alongside the Liverpool elite.

The likes of Philippe Coutinho and Luis Suarez never had pace to burn like Mane, with the Brazilian heavily favouring his preferred side, making him easier to predict.

Luis Suarez slalomed his way through defences with cunning brutality – the nutmeg being his weapon of choice – but his inferior speed meant he could never start his runs as deep as Mane could.

Mohamed Salah offers the most obvious comparison, putting defenders on the floor with his disguised twists and turns. The Egyptian falls into a similar habit that Philippe Coutinho suffered from – favouring one side – though that has improved more recently. Still, Mane has been adept at using either foot for far longer, both for dribbling and scoring goals, posing numerous problems for opposition markers.

A final touch to Sadio Mane’s skill set is his work rate. Usually deployed on the left, Mane is more than competent at putting in a challenge and offering cover for the effervescent Andy Robertson – just another Jurgen Klopp prerequisite that Sadio Mane fulfills with flying colours.

Sadio Mane has proven me wrong since day one. I still remember being stunned by his debut effort against Arsenal more than three years ago. Since then he’s gone from strength to strength, establishing himself as not only one of the best players at Liverpool, but among the best in the world.