With one-third of the NBA season complete, a clearer picture of this year’s title race is beginning to emerge out of the early season action.

While it is no surprise to see the names like Giannis Antetokounmpo, Luca Doncic and James Harden dominate the headlines, a number of lesser-known stars are putting their hands up for recognition after a stellar start to the season.

In Charlotte, Hornets point guard Devonte Graham has experienced a breakout season to sit as one of the leading contenders for this year’s most improved player award.

The departure of franchise guard Kemba Walker created an opportunity for Graham to cement his spot as Charlotte’s chief playmaker over new recruit Terry Rozier, and the 34th pick in last year’s draft has done exactly that, averaging 19.3 points and 7.5 assists across 33 games.

Graham’s three-point shooting has been of particular note, sitting fifth in the league with nearly four triples per game at a handy 41 per cent clip, up from 28 per cent last season.

Sitting one position below Graham’s Hornets in the East are the Chicago Bulls, who are being led by dynamic guard Zach LaVine.

The Bulls currently sit eighth in the league for scoring with LaVine accounting for over 22per cent of their points as he averages 23.6 points per game.

Better known for his electric performances in the slam dunk contests, LaVine has demonstrated his abilities from deep this season, as highlighted in his career-high 13 triple performance against the Hornets that tied Steph Curry for second on the list of all-time three-point field goal games.

Currently sitting as a fringe top-15 scorer in the league, LaVine has entered the all-star conversation but his teammates lack of output could hurt his chances, along with Chicago’s playoff hopes.

Sitting higher than LaVine on the scoring list is Phoenix shooting guard Devin Booker. The thirteenth pick of the 2015 draft has quietly cemented his place as the Suns’ franchise player, averaging 25 points in 36 minutes per game this season.

With field goal, three-point and free-throw percentages of 50.7 per cent, 38.2 per cent and 90.3 per cent respectively this season, Booker could become just the ninth player to join the 50-40-90 club. In doing so, he would join the elite company of Larry Bird, Dirk Nowitzki, Stephen Curry, Kevin Durant, Reggie Miller, Mark Price, Malcolm Brogdon and fellow Phoenix legend Steve Nash.

Booker has contributed across the board for his Arizona-based side, helping them exceed the expectations of many to sit two wins out from the eighth spot in a tough Western Conference. With star centre Deandre Ayton back from a 25-game doping suspension, the Suns should contend for a playoff berth come April. 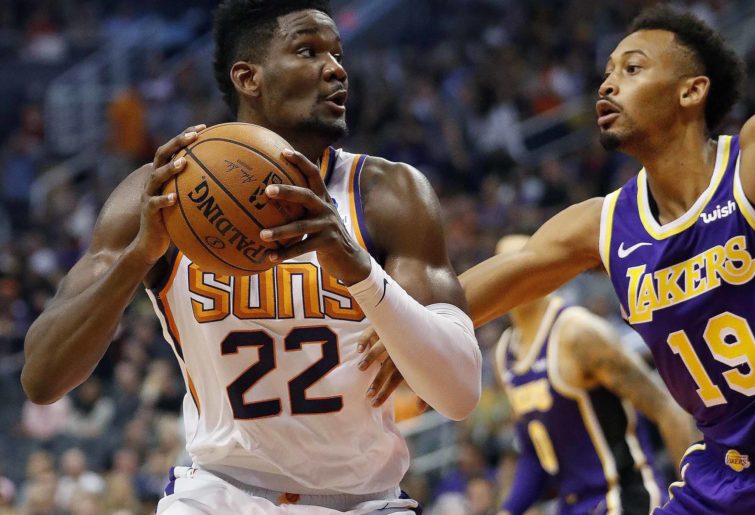 In a similar vein, the Miami Heat are making amends for a poor 2018-19 campaign that signalled the end of the Dwyane Wade era at South Beach, currently sitting third in the East behind Milwaukee and Boston.

While Jimmy Butler has been the main force behind these positive results, center Bam Adebayo has averaged a double-double with 15.7 points and 10.6 rebounds per game.

Miami’s third-year man has also provided a tertiary playmaking option for the Heat, as demonstrated by his 11 assists against the Hawks in December – a game in which Adebayo scored a career-high 30 points in a triple-double performance.

Averaging over a block per game, Adebayo has been a force at the rim – a reputation that former Heat big man Hassan Whiteside has strengthened throughout the early portion of this season. Whiteside has averaged 2.7 blocks per game, peaking with an astonishing ten-block game against Chicago in late November.

After their appalling start to the year, the Trail Blazers have fought back to eighth spot in the West in no small part thanks to Whiteside, who has chimed in with 15.3 points and 13.2 rebounds per game, two figures that exceed his career averages in Sacramento and Miami.

As his combination continues to build with Portland’s all-star guard combo of Damien Lillard and CJ McCollum, Whiteside can expect to see an uptick in his assist numbers throughout the remainder of the season as the Trail Blazers continue their quest to return to the fold of contenders in the West.

Elsewhere in the league, Jonathan Isaac, Fred VanVleet and Domantas Sabonis deserve honourable mentions for their performances that have placed their teams in the top eight of their respective conferences, while Brandon Ingram and Richaun Holmes will be hoping to lift their teams into playoff contention later in the season.