The Oklahoma City Thunder are an oddity – a team that expected to contend last year and rebuild this year, but both times ended up in more or less the same place: an unthreatening playoff team.

The Thunder are a strange and fun intersection of compelling pieces – young talent, older holdovers, and quality veteran salary dumps. The team was not constructed to win – it was provided as a means to achieve goals that very few of the current players will have anything to do with.

Steven Adams, Danilo Gallinari and Chris Paul are inescapably good players. This Thunder team doesn’t truly need them, but it has them and the present-day competence they ensure.

Going forward, this will be Shai-Gilgeous Alexander’s team, but for now Paul is its heartbeat. Paul is the team’s star and best player, the go-to-guy at the end of games, and the presence that drives everything. His athleticism has wilted but his brain is still magnificent – he still looks like Chris Paul and for the most part still plays like him. 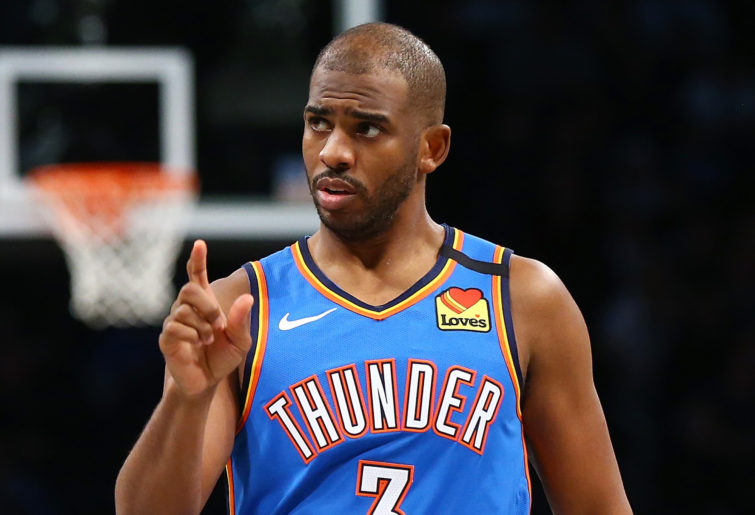 All the wonderfully good and wonderfully bad about Paul is still there. The crossovers and hesitations that create so much space that he can pull-up completely unhurried. The fade-away mid-range jumpers falling right. The pull-up threes in transition. The professorial foul-hunting and gamesmanship.

Control and intensity have always made Paul unique and brilliant. His economy of movement is exquisite, with every step and gesture working towards a greater purpose, always probing and on the verge of a decisive move. He sees everything.

He’s a cerebral genius but also a brat. Always bitter and always aggrieved. He still competes on defence as though opponents went too far in offending him with something, getting into his man as though it’s personal. He closes out and boxes out with manic physicality, desperate for his outcome. He’s an annoying terror on defence, the biggest and most intimidating six-foot-nothing NBA player around.

He was absurdly good on the 2018 Rockets and fell back to earth last year. His efficiency is mostly back this season, although the volume is down – probably for good, now.

Paul will soon be 35 years old. For a decade he may have been good enough to be the best player on a title team, although famously some how never made it past the second round in all those years before joining Houston as James Harden’s foil.

That time has passed and now Paul has settled into a strange place – still a star, still a joy, but on a team whose future won’t include him. It is brilliance only for the sake of brilliance, not building to anything greater aside from the pleasure of its occurrence.

In the meantime, the Thunder are a fun team. Their three guards – Paul, Alexander and Dennis Schroder – cover a large part of the ball-handling guard stylistic spectrum, and their slithery overlap makes OKC a unique watch.

Alexander, with his herky-jerky crossover drives, ridiculous limbs and developing control, is the most explosive, but Paul is still the one, the player you remember from any OKC game.

His best days are gone, but his days right now are still plenty fine – and when all you can watch is the present, it might as well be enjoyed.