Luka Dončić is a genuine MVP contender this season

Luka Dončić’s unprecedented rise to the top of the NBA should not come as a surprise.

Dončić has been gifted with the rare court IQ that is only seen in the great players, that undeniable vision of everyone around him, and the hunger to step up in the moments that matter the most. It won’t be too long until Dončić is in the argument of the best basketball player in the world.

Dončić has not taken any form of a sophomore slump after his rookie campaign, that saw him win Rookie of the Year. What he’s done is the exact opposite of a slump and instead risen to new heights.

Dončić is now, in many eyes, a top ten player in the NBA, taking the step many people thought Ben Simmons would have taken by now. Dončić is the go-to guy on his team, the on-court leader who every night takes his game to different levels and also brings his teammates games to higher levels.

Since being partnered with former New York Knicks player Kristaps Porziņģis, Dončić has turned the Dallas Mavericks into a playoff team, currently sitting sixth in the West with a record of 23-14.

Dončić’s stat line of 30 points, ten rebounds and nine assists per game show to the huge impact he can have on a game night in and night out. What he does every night demands attention and demands the attention of MVP voters, Dončić is forcing his way into the MVP argument with Giannis Antetokuonmpo, LeBron James and James Harden with his smooth, elegant way of playing basketball.

This is not all to be taking away from what those three men are doing on the court, but more or less just showing that what Dončić is doing is truly amazing. Dončić has impressed when going head to head against James Harden and LeBron, against Harden and the Rockets Dončić had 41 points, ten assists and six rebounds in a 137-123 win for the Mavs.

In numerous performances against the Lakers, Dončić has shined, in an OT loss, Dončić was still able to post a game of 31 points, 15 assists and 13 rebounds. In a later meeting with LeBron’s Lakers, Dončić posted numbers of 27 points, ten assists and nine rebounds. This showcases that Dončić does not go missing when the stars are lined up against him.

Dončić is well and truly in this year’s MVP conversation, and get ready for that to be a line said many times for the coming years, as Dončić and his Mavs look to build a new day dynasty. 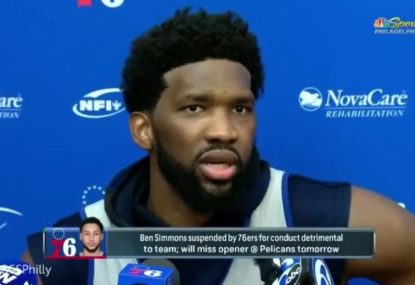