The opening two seasons of the Super W have been challenging for the Melbourne Rebels, who are yet to register a win.

Heading into season three, the Rebels have added experienced campaigner Melanie Kawa to their squad.

Kawa made her debut for the University of Queensland in 2006. Since then she has played for Montpellier in France – making her the first Papua New Guinea woman to play professional rugby in Europe’s elite competition – coached the Nauru women’s sevens team, and has also co-captained PNG.

“Melbourne was a pleasant surprise. I was invited to visit Melbourne to play with Melbourne University,” says Kawa.

“After playing some sevens, I was head hunted by the 15s coach who told me that if I was serious about coming down, then I had a place in the training squad.

“It’s a great squad. Everyone is really passionate about rugby and getting better together. I found myself being able to contribute with my experience and I have loved it ever since. I’m still loving it.”

Even though Kawa has only been in Victoria for a couple of months, her new teammates have shown tremendous faith in her for the upcoming season, electing her co-captain alongside Meretiana Robinson.

“The captaincy was a really big surprise,” says Kawa. “I was really honoured because I have a lot of experience that I love sharing. I am at a point in my career where I have played a lot and I have a little bit to give back.

“Sharing it with these women is incredible. They are so eager to learn. I really found my place early in the team and am keen to share every inch of experience that I have.”

No doubt the Rebels are hoping that this experience is a good balance for the skills of Robinson, who also captained the squad last year.

Robinson knows each of the squad members on a personal level, something which Kawa is also hoping to achieve.

Something Kawa is passionate about is nurturing the next generation of players coming through and show them that rugby is a legitimate pathway.

“The way we keep the game growing, both at a grassroots and at a high performance level is to make sure that people enjoy their rugby experience,” says Kawa.

“It is great playing with women that could be my daughters and sharing my experience with them.” 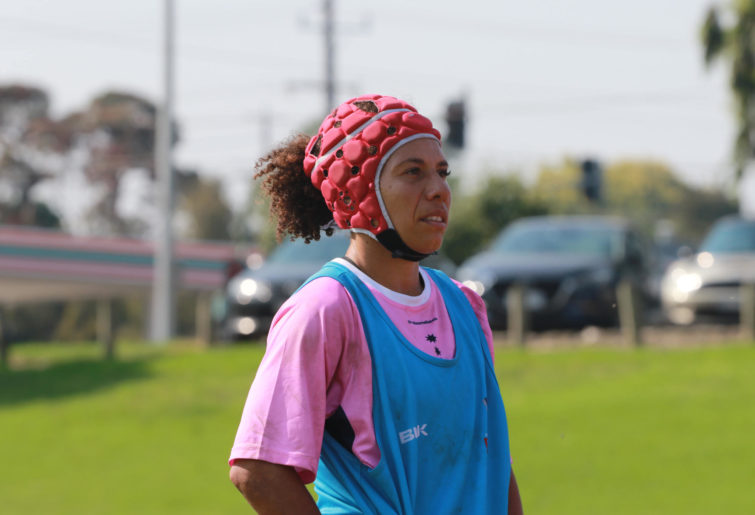 Kawa was born in PNG and, given it’s the country’s national game, she could just as easily been a rugby league player.

“I grew up in PNG watching rugby league. I was an obsessive fan. I didn’t know about rugby union until my 20s. Ever since then I’ve seen that there is growth opportunities for PNG in rugby union,” says Kawa.

While Kawa is sceptical of the potential for rugby union to become more popular than league, rugby in PNG has scoured the country looking for and fostering talent, particularly when it comes to the sevens space.

PNG may be a Tier 2 nation, but Kawa is confident this can change.

But regardless of whether its league or union, Kawa recognises the role that sport can play in PNG.

“You can do a lot of advocacy for women with sport in PNG, because people just love sport so much,” says Kawa.

“Rugby league is a great example of that. I followed the journey of the PNG Orchids, who now get big crowds when they play in Port Moresby.

“Sport can help spread some really powerful messages and in PNG it has the opportunity to break down some old school gender roles.

“Gender-based violence is a problem in PNG just like it is in many parts of the world. Just to see positive female ambassadors in sport is really powerful and we have the chance to make really meaningful change in PNG.”